The AH-1G Cobra is a dedicated attack helicopter design, derived from the well-known UH-1 Huey, which primarily supported the combat actions of U.S. forces in the Vietnam War. Keep your head inside your hatch tankers, the Cobra is coming in hot with the release of War Thunder update 1.81 The Valkyries!

Briefly: The Huey’s worthy successor in the gunship role, sporting excellent speed and handling characteristics in combination with deadly weaponry.

Parallel to the development of the UH-1 transport helicopter, Bell was actively conducting research on helicopter gunship designs. This resulted in the creation of the “Iroquois Warrior”, a mockup of a gunship design based on components from the UH-1B Huey. The mockup was presented to interested Army officials in June 1962, resulting in a proof-of-concept contract later that year. Following the contract award, Bell created the Model 207 “Sioux Scout”, which was evaluated by the Army in early 1964.

Although impressed by the Model 207, the Army seeked a larger and more powerful design, resulting in the creation of a new competition of which Bell was not a part of. Instead, Bell independently continued developing and refining their gunship design,  eventually creating the Model 209 - a design that was a combination of the Iroquois Warrior mockup and the concepts behind the Model 207.

Meanwhile, the ongoing Vietnam War sparked an urgent demand for dedicated attack helicopters. Although gunship versions of the UH-1 performed this role with relative success, the fact that they weren’t initially intended for this role somewhat limited their effectiveness. Back in the States, the Army’s ongoing competition produced no winning design as a result of technical and political difficulties. To quickly address their demand, the Army started looking for an interim design to act as a stopgap measure in 1965.

Soon after testing of the Model 209 concluded in September 1965, the Army decided to award Bell with a manufacturing contract later that year. The contract officially put the Model 209 into production under the Army designation of UH-1H HueyCobra, but was later redesignated to AH-1G Cobra.

The AH-1G Cobra entered service with the U.S. Army in 1967, participating mainly through the remainder of the Vietnam War as well as other conflicts. The AH-1G was retired from active service in the early 1980s, being replaced by newer models of the Cobra. 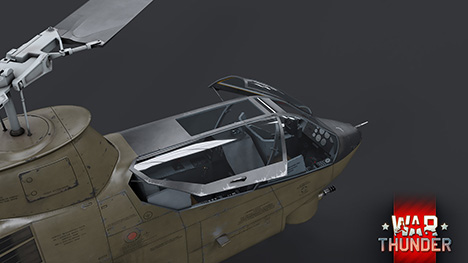 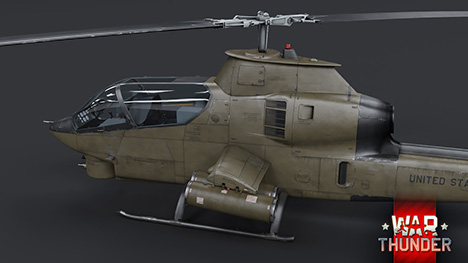 In War Thunder, the AH-1G Cobra will appear in the American aviation research tree with update 1.81. The Cobra is a gunship attack helicopter, similar to the UH-1C Huey which we’ve discussed in a previous devblog, with the difference of being designed from the start to fulfill this role instead of being converted to it, as was the case with the UH-1.

Even though it may not be immediately visible, the AH-1G Cobra shares some of its parts and design solutions with the Huey, such as the tail section, rotors and turbine engine, to name a few. Speaking of the engine, the Cobra is powered by the same Lycoming T53 turboshaft engine as found on the UH-1, albeit with an increased power output of 1,400 horsepower, compared to the UH-1C’s 1,100.

Fun fact: In 1968, an Army AH-1G was involved in a unique rescue operation, where a downed Air Force pilot was rescued from enemy territory by holding onto the opened gun panel doors of the helicopter for the entire duration of the flight.

The powerful engine in combination with the Cobra’s smaller size and weight, allow the aircraft to achieve a maximum top speed of 172 mph (277 km/h), whilst offering even better handling characteristics than the Huey. However, armor protection is also kept light on the Cobra, being about the same as on the Huey, which means that using speed and agility as protective measures will remain of paramount importance.

As the AH-1G was designed from the ground up to be used in the gunship role, the number and type of possible armaments the machine can carry varies significantly compared to the UH-1C. As the primary armament, it mainly used the six-barreled 7.62mm gatling gun with 4000 rounds of ammunition paired up with a 40mm grenade launcher with a capacity of 231 grenades. Additionally, other combinations of weapons could be utilised.

In addition to that, the Cobra can mount various other secondary armaments underneath its stub wings, such as additional gunpods, pods for both high explosive and shaped charge rockets. This wide range of available secondary ordnance options in combination with the primary weapons, make the Cobra a force to be reckoned with for commanders of main battle tanks on one hand, and an absolute nightmare for drivers of lightly armored machines on the other.

Be on the lookout for the arrival of the AH-1G Cobra to the skies of War Thunder with the release of the upcoming update 1.81 The Valkyries. Be sure to also stay tuned to the news for more information regarding the next major update. Until then, safe flying pilots!

Commenting is no longer available for this news
Rules
Clockworkreaper
16

SalrazZ, Could not be otherwise, it was Vietnam vs Vietnam!

Smin1080p, can i ask why US does not have preorder Cobra?.... its kinda unfair RU has decent preorder and US just transport heli?....

SOME FOLKS ARE BORN

MADE TO WAVE THE FLAG

Oooo a 40mm automatic grenade launcher you say? That one is going to be fun

Finally a weapon to surpass the milk trucks

DominantReverse, to kill tanks ? br 9.0 and above ?

I really need to see something for Japan.

I really need something other than US, Russian or German!

Hidla, Look up some of the leaked vehicles for this patch. I think you'll like what you see.

Can we get the M1IP as a modification of the M1 plz?

M1IP is too different, can't be a simple modification

ChaosZSIR, Its a modified turret with improved armor, hull is still the same. Hardly worth another 390,000RP. Maybe a 50k, final tier unlock like the Super Conqueror or T-64BV modifications

it's a very late vehicle. Will probably take some time for Gaijin to get that far.

Ainen, The AH-1F cobra has already the same capabilities as the AH-1Z Viper. Only difference in this game will be a little more speed and agility. Nothing really that required a tech upgrade from other vehicles, both of them will perform very similarly.

So just to clarify this once and for all, will the helicopters have their own techtree like stated in the Q&A or will they be an independent tree within the aircraft techtree like shown at gamescom? I would really prefer them to have their own tab in the techtree, like planes, tanks and ships have right now.

I don't think that they'll have enough helicopters to fill out a tech tree, because these are supposed to start at tier 5 if I remember correctly. If they were put into their own tree, people could pretty much start researching the best helicopters, which I don't like the idea of level 10s getting their hands on them.

YouWotMate, They could simply lock the entire helicopter tree until a player has reached tier 4 with aircraft or tanks, as they said they would do in the original Q&A.

Will this have an option to upgrade to the AH-1Q, the upgrade package that allowed to equip early TOW missiles?