Briefly: An experimental version of the Leopard 1 outfitted with the powerful Rheinmetall 120mm L44 cannon and additional premium bonuses to silver lion and research point gain.

This late prototype of the Leopard 1, developed in the 1980s, is a proof-of-concept that the Rheinmetall 120mm cannon could be fitted on the Leopard 1 chassis.

This highly interesting member of the Leopard 1 family will soon join the ranks of the German ground forces tree as a new rank V premium vehicle, coming to the game with the release of update 1.81!

Development of a Leopard 1 fitted with the 120mm L44 cannon began as a private venture of the Rheinmetall company, hoping that such a Leopard 1 variant would be of interest, not just to the German army due to logistical commonalities with the Leopard 2 and higher performance of the gun, but also to international customers seeking third generation MBT features on older machines.

In the early 1980s, a Leopard 1A1A1 was modified with a thicker cast steel mantlet, suitable for mounting the Rheinmetall 120mm cannon, and additional interior changes to hold the respective ammunition. Further changes were applied in early 1985, with the installation of the EMES 18 fire control system from the Leopard 1A5.

Although there were several different prototypes based on Leopard 1 outfitted with the 120mm Rheinmetall cannon, none of them managed to justify a costly large scale upgrade effort of existing Leopard 1s. The upgrade was largely considered redundant due to the already more advanced Leopard 2 being in service. 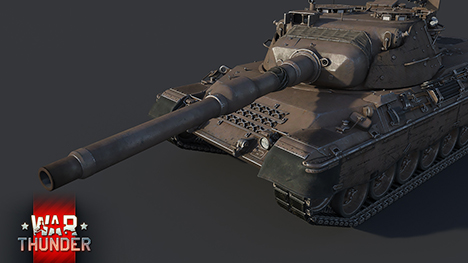 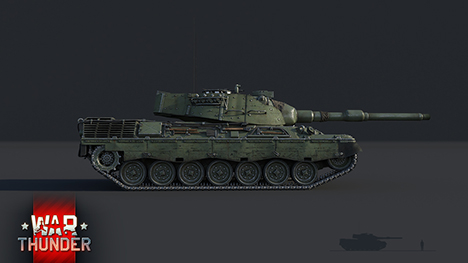 In War Thunder, the Leopard 1 120mm will become available with the release of the next major update to all tankers and avid collectors as a new rank V premium vehicle of the German ground forces tree. For fans of of the Leopard series, this vehicle represents the binding link between the Leopard 1 and Leopard 2, featuring some distinctive features of both vehicles in a one package.

From a distance, you’d be forgiven for thinking you’re just looking at a standard Leopard A1A1. After all, a large portion of the vehicle’s outside appearance remains unchanged. However, when observing this Leopard 1 at a close distance from the front, several changes become apparent.

The biggest, and easiest change to spot, is the new 120mm L44 smoothbore cannon that replaces the old 105mm rifled L7 cannon. With this upgrade, owners of the new Leopard 1 will be able to confidently engage heavily armored targets at longer distances as the new cannon is capable of firing more potent sub-caliber rounds, such as the DM13, and with better precision.

However, the installation of a more powerful cannon did bring with it some drawbacks as well. Namely, the additional armor protection found on the Leopard A1A1’s gun mantlet had to be removed in order to fit the new cannon. This leaves the gun mantlet of the Leopard 1 more susceptible to damage from enemy fire.

Despite this, experienced Leopard drivers know that the vehicle’s strong suit never was armor protection, but mobility and firepower instead. Continuing to utilize these strengths, that now got further improved with the new cannon, can only yield better results. That being said, this experimental version of the Leopard 1 is truly a must-have for fans of the Leopard series and for tankers eager to speed up their research progress through the higher tiers of the German ground forces tree.

The Leopard 1 with the 120mm L44 smoothbore cannon will become available to War Thunder tankers with the release of the upcoming update 1.81. Until then, stay tuned to the news for more exciting information regarding the next major update coming to the game very soon! Good hunting, commanders!

Commenting is no longer available for this news
Rules
oRyx
44

What has happened to Gaijin? Not enough money?!

Gaijin? We are still here adding the machines that the community has requested for some time :) As a free-to-play game there has to be premiums in order to keep the game that way. Not matter what machines we choose, it will never be to everyone's taste, but in this example, the tank is best suited as a German Rank V premium.

Smin1080p, The TAM is a perfect example of what should be a premium, this kinda isn't...

They are only consequent and giving each nation a 9.0 premium. What the reason for these was in the first place, we don't know.

Do you not listen? No one should have the option of spending money to get straight into tier 5 and top tier in BRs this high!

We do indeed listen. People have been requesting a better and more unique rank V premium for Germany since the introduction of M47. This prototype example of the Leopard fits the gap well and provides a solid counter to the XM-1.

Smin1080p, Hey, this isn't exactly unique, something like the TAM would be unique but this is just an existing vehicle with a better gun which would make much more sense as an UPGRADE not a PREMIUM

Of course they don't listen all they care about now is making a quick buck.

JG3_Luftwaffle, As soon as they added the XM-1, they had to give one to EVERY nation. Now at least tier 6 noob whales will be balanced across teams

hahaha... we got something cooler to counter XM-1, so can you remove the APFSDS on the 1A1A1 itself and give it back its old BR?

ChaosZSIR, That is sad... Nice whaling

Any leo + chopper bundle? I hope there will be :(

SalrazZ, You know Germany didn't get a gunship til 2003.

1.81 does not include any German Helicopters. The CBT will begin with Russian and American examples.

Considering you only changed the gun barrel, you might've made it a bit cheaper... ))))