Fill the survey! Survey is over. Thanks to all who participated!

Please note: only players who have completed 5 battles since the update was released can participate in the survey!

We are happy to announce the release of Update 1.69 ‘Regia Aeronautica’, which unlocks the Italy as War Thunder’s sixth nation, initially offering a formidable line-up of 35 of the most historically accurate representations of their famous Air Force in any computer game ever.  Other features include new aircraft and tanks for five other nations, the long-awaited ability to launch smoke grenades and smokescreens from tanks, new realistic recreations of battlefields, and support for PlayStation®4 Pro.

Click on the link to see the full Italian research tree

More about the introduction of the Italian tree in War Thunder:▼

When will the closed test of the Italian aircraft tree start and how it will be done?

How do you become a tester?

Some Italian aircraft are already represented in the German tree. What will happen to them?

Will the Italian premium vehicle packs stay available for purchase in the shop?

The United States gets access to a new top-rank vehicle, the M60A2 “Starship”, which can fire both conventional shells and guided-missiles from its 152mm cannon. For the Soviet Union, the T-55A is introduced as a worthy successor to the T-54, sporting excellent close combat and flanking capabilities. The Japanese tree sees improved version of the Chi-To Late version. Fans of the British vehicles will be able to obtain Churchill Mk.I, the older brother of the Churchill Infantry tanks that are already presented in the game and rank 5 reinforcement - the mighty Vickers Mk. 1.

A completely new feature in War Thunder are smoke grenades and smokescreen launchers. The first will allow tankers to deploy protective smoke over large distances, while the latter are an effective method to hide from enemy fire while repairing on the battlefield or defending a capture point.

The ground battles location ‘Kuban’ has been greatly revamped, which will make tank combat on the new location much more tactical and varied. For pilots, the hot sands of ‘Tunisia’ await. Knights of the Sea pre-beta testers will be able to try the Black Sea Port! 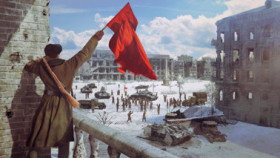 Pages of History (February)
Share the news with your friends!

Commenting is no longer available for this news
Rules
CJSTAR
2

Look at him! A born comedian!

Stona_WT, He is not a pilot, this is not a fair battle We just keep him because he is fun Look at him go haha (who knows the reference?)

Is the pumas hill climbing really that bad.?

It's wheeled vehicle, not track ones.

Stona_WT, i know, but its the worst of all vehicles ive tried... so far by a long way

could someone explain why i can not gain my 11th slot on the nation itally while i do have it on all on my other nations ore do i have to ged 10 more pepole to ged to tier 3 ?

Hm yes what are these specific game tasks that the game asks me to do to access other italian planes without paying? I dont see them anywere...