News
back to news
Development
6 September 2018

The Mi-35M is a modern utility combat helicopter of the Russian army, the modernized legacy of the iconic “Hind”.

The Mi-35M is a modern utility combat helicopter of the Russian army, manufactured by Rostvertol helicopter company. At the moment, the Mi-35M is the most modern modification of the Mi-24 series. During its versatile service in Afghanistan, India, and other locations, the “Hind” performed well, but had few vital flaws. A modernized version, titled Mi-35, underwent specific improvements. The helicopter gained new more powerful engines, the metal rotor was replaced by a composite one,  the 3-bladed anti-torque rotor was replaced by an X-shaped composite one. The Mi-35M was given fixed landing gear, and new shorter wings with only four weapony mounting points. The weapon itself has also been updated: A 4-barreled 50.cal machine gun in the chin-mounted rotating turret is now replaced by a twin-barreled 23-mm GSh-23L auto cannon. Mounted weaponry now consists of two types of ATGMs, modern air-to-ground unguided rockets, 23mm cannon pods, and other changes. The Mi-35M is currently in service in the Russian Air Forces, and other nations. Russian and Iraqi Mi-35M-s fought in recent actions in Syria. 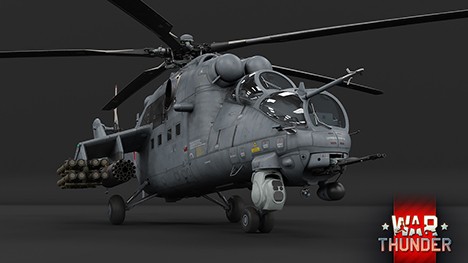 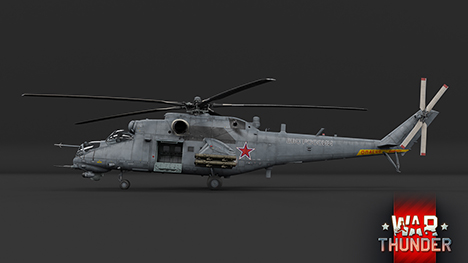 By the time of the War Thunder update 1.81 release, the Mi-35M will be the top of the USSR/Russian helicopter tree. Pilots, who shepherd a herd of previous “Hinds”, will easily master their skills in the Mi-35M - combat basics here are similar.

You now have your hands on the most advanced “Hind” available - faster, quipped with much more capable chin-mounted cannons, and the widest variety of combinations of mounted weapon configurations. Two types of ATGMs - “Shturm-V” and “Ataka-V” - available in combinations of 8 or 16 units, S-8 air-to-ground unguided missiles (40 or 80 rockets in combinations), as well as two gunpods with 23-mm double barreled cannons. Only four points for mounting weapons with many combinations! As a result, you are free to tune the Mi-35M to perfectly fit your combat tactics - aggressive fire raids, or long-distance guided shots. The Mi-35M lacks critical flaws, except her size and weight of course.

The Mi-35M in Russian Air Forces camo waits your command in War Thunder update 1.81 “The Valkyries”. See you there!

Commenting is no longer available for this news
Rules
TempestRiser
0

Could we see another nations camo ? i would love to fly this machine with the Brazilian Air Force camo

they added the AH 1Z

For the people who makes skin, please please, the brazilian air force uses this heli.

Question, will the Helicopter beta have the users research progress reset when it goes into alpha? Cheers and beautiful model.

everything on dev server wont be passsed to live server