Once the AMX-13 was developed, it’s chassis proved itself to be a very versatile one throughout the vehicle’s service life, taking on many different roles if certain adjustments were made. Thus, it’s not surprising that French engineers considered the AMX-13 as their first choice to serve as a base on which one of France’s first post-war mobile SPAA units would be created.

During and after WW2, the French army relied for the most part on American M16 MGMC half-tracks to provide the desired AA cover for ground troops. In the early 1950s, French engineers looked into the possibility of manufacturing a native mobile SPAA vehicle, based on either the new Panhard EBR armoured car or the AMX-13 light tank. After examining both possibilities, the decision was made to base the new SPAA on the chassis of the AMX-13 light tank. The weapon of choice would be a single Bofors 40mm anti-air cannon, mounted in an open topped turret. Once the prototype was constructed, a one year long testing period followed. Testing showed that the 40mm cannon was no longer suitable for use against the high-speed jet aircraft in use with most modern air forces of the day. Thus, the project for an AMX-13 SPAA armed with a 40mm autocannon got cancelled soon after testing was concluded. However, although the version with a 40mm cannon was quickly abandoned, the concept of the AMX-13 SPAA wasn’t entirely dropped. Instead, a version with dual 30mm autocannons was developed, successfully tested and subsequently entered mass production as the first French post-war mobile SPAA vehicle. 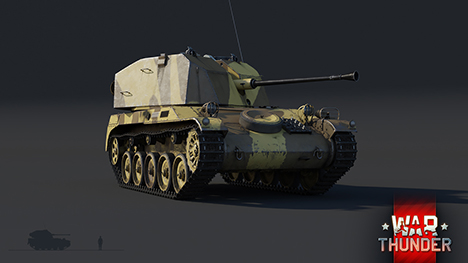 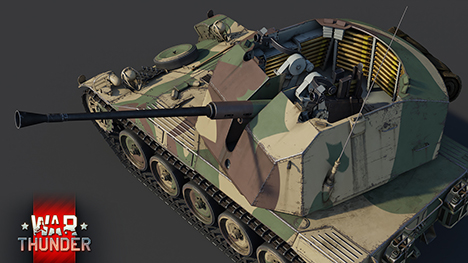 In War Thunder, the AMX-13 DCA 40 is a self-propelled anti-air vehicle of the fourth rank of the French ground forces research tree. In contrast to the previous SPAA vehicles players can unlock, the AMX-13 DCA 40 represents the first proper attempt of French engineers to build a modern SPAA vehicle. Whilst vehicles preceding the AMX-13 SPAA were either early half-track designs or modified flatbed trucks, this one is fully tracked, armoured and fairly mobile both on and off roads. The DCA 40 is the first vehicle of the French SPAA line that offers its crew some kind of protection against incoming enemy fire and shrapnel, effectively eliminating one of the biggest  weaknesses of the early French anti-air vehicles. With the AMX-13 DCA 40, players no longer need to worry about being easy prey for enemy aircraft and other tanks, as the chassis of the AMX-13 has enough armour to stop small arms fire and shrapnel from injuring the crew. However, the open topped turret is still a very vulnerable part of the vehicle which can easily be targeted by circling aircraft or fall victim to a stray artillery shell.

Avoiding serious threats has also been made easier with the DCA 40, when compared to its predecessors. Quickly repositioning from one place to another has never been as easy as with the AMX-13 chassis. The vehicle’s low weight in combination with the powerful engine allow it to almost fly across the battlefield at a moment’s notice, whereas it would take considerably longer with the previous anti-air vehicles. In addition to making the vehicle itself much faster, the 40mm AA cannon has also been modified to double the rate of fire of the previous model, bringing it up to 240 rounds/min. This will allow players to more effectively engage enemy aircraft on one hand, but also makes the gun overheat faster on the other. Burst firing would be the recommended firing mode here, as it not only significantly reduces the chance of an overheat from happening, but also saves on ammunition and allow players to adjust their fire more efficiently and with greater precision, compared to continuous firing.

Overall, the AMX-13 DCA 40 is one SPAA vehicle French tankers and SPAA fans will strive to get when progressing through the newly added French ground forces tree. It’s enhanced mobility, protection and firepower are a direct upgrade from previous vehicles, making it not only much easier to use, but also more fun. What do you think? Have you had the chance to try out the AMX-13 DCA 40 yourself yet? Or did you already received a large hole in your left wing from it? Feel free to share your experiences in the comments below. Until next time!

Commenting is no longer available for this news
Rules
HeavenAndClouds
9

*a picture with skeleton waiting for something*

*another waiting skeleton* oh boy, did they opened some graveyard somewhere near?

Pretty good SPAA that can hold its own against light tanks and shoot heavier stuff in the sides.

Very true. I've killed panthers, ST-A's and a few other mediums and heavies with this little guy. 76mm of pen seems to do a pretty decent job.

Personal wishlist whining rules yet again. A welcome addition this one, the game needs many more AA units, so few right now.

Such a lovely upgrade from the CCKW.

Replacement for Falcon please? Something for tier 6 or after the outdated Falcon.

Have fun waiting, Gaijin stopped caring about the British tree when they stopped making them money.

Give Japan the Type 87 prototype, Type 87 turret and gun on Type 61 chassis.

Isn't this vehicles weapon supposed to be Bofors 40mm L/70? So why does it have exactly same ammo and stats besides rof as L/60 Bofors found in other vehicles?

I am sure that there will be something more, like in every Major Update. Thing is, this article is not related to future update, but to vehicle that we already have in the game :)