A legendary GMC truck chassis equipped with an automatic 40mm caliber Bofors cannon is a French recipe for a powerful, adaptable anti-aircraft gun—and it will roll into War Thunder accompanied by some all new French tanks in War Thunder update 1.75!

Nicknamed the “Deuce-and-a-half” by the U.S. army, the American 2.5 ton triple-axle 6x6 made by GMC is a true army workhorse. GMC trucks were vital to supplying and equipping allies after land operations began in Europe, and more than 560 thousand of these trucks were produced during World War II. They proved invaluable to supply lines and the battlefield. The GMC CCKW 353 was a combat model of the famous truck equipped with a 40mm anti-aircraft gun and used by the French in WWII.

Various allied armies other than the US used the reliable GMC trucks. France adopted a variant of the 1941 model with a simplified cabin design and longer chassis—the military all-wheel-drive (6x6) GMC CCKW 353. Equipped with a 40mm Bofors cannon (very familiar to War Thunder naval warfare testers), the GMC vehicle was transformed into a mobile anti-air defense platform that could also be used against ground targets, such as enemy infantry, lightly armored vehicles, and fortifications. 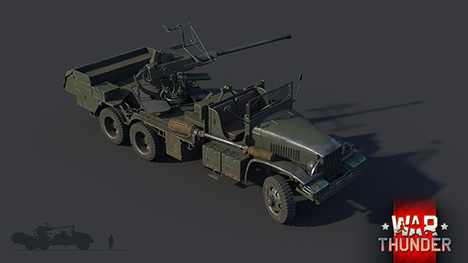 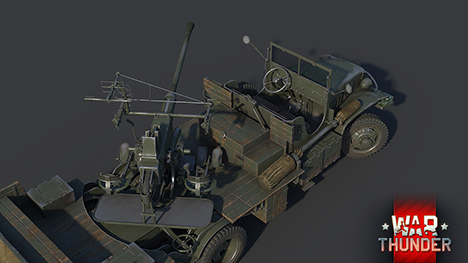 In War Thunder, the self-propelled anti-air GMC CCKW 353 with the Bofors cannon occupies the medium ranks of the French armor tech tree. The vehicle has no armor, so its role on the battlefield is solely to support allies. The CCKW 353 commander has two types of ammunition available: a tracer, high-explosive fragmenting round perfectly suited for destroying airplanes, and a solid armor-piercing tracer round capable of destroying enemy tanks and armored vehicles.

In addition to this adaptable, French anti-air platform, we are pleased to present some new,  French tankman model specially created for the new French ground vehicles coming in War Thunder update 1.75. See you there!

Commenting is no longer available for this news
Rules
Indigo_1
9

After reading that comment, just one brief second, i saw that truck in woodland camo, with an EOTech and a SureFire X300. It will haunt me for a long time.

Jean Pierre will show some idiots how brave the french actually were, awesome job!

Wait, the same French that danced in the streets after surrendering because they were so tired of fighting. I do like the French though.

i love big calibre gun SPAAs but im still gonna be exited when they put the AMX 50 and the AMX ELC on the devlogs :33333

Great addition! But will it be lightning fast as the russian milk truck or slow as hell like the japanese or german ones ?

Amazing model, big up to the 3D artists!

A new French vehicle is great. I can't wait to see these tanks in this game. By the way, Gaijin, are there any new Japanese new tanks in the next patch??there are many BR gaps in JPs tech tree need filled.

Amen! And there are plenty of tanks to fill them too!