Char B1ter: A Blast From The Past
4 December 2017 Development

The Char B1 remains one of France’s most iconic WW2 era tanks not just due to its instantly recognizable visual appearance, but also due to its widespread use during the Invasion of France in 1940. Coming with update 1.75 "La Résistance", aspiring French tank commanders will have the chance to try out the final and most advanced modification of the vehicle’s series, namely the Char B1ter.

The Char B1 was one of the most produced and widely used indigenous French tank designs employed during the Invasion of France in 1940. The Char B1 came in three modifications, with the ter modification marking the third and final one. Each modification brought with it several changes that would improve the design’s overall performance, from the installation of more powerful engines, over enhanced armour protection and anti-tank capabilities to increased ammunition count. Although the Char B1’s development began as early as the mid 1920s, the B1ter version was conceived around the same time the Char B1bis entered serial production, in 1937.

Compared to the B1bis, the ter modification featured thicker frontal armour protection, going up to 75mm. Apart of the extra armour, the B1ter was also equipped with a more powerful 350 hp engine as well as a different transmission and received space for an additional crew member too. These changes increased the weight of the vehicle up to 36.6 tonnes, but also made the planned production process a lot easier, faster and most importantly, cheaper. The first prototype of the Char B1ter was constructed and shown off to French military officials in 1937, with testing and production approval following in May 1940. However, at that point, it was a case of too little too late for the Char B1ter. Three further prototypes were constructed before France capitulated in June 1940, with efforts to evacuate the prototypes from France ultimately failing, as the ship transporting the vehicles was sunk by a German air raid on 21 June 1940. 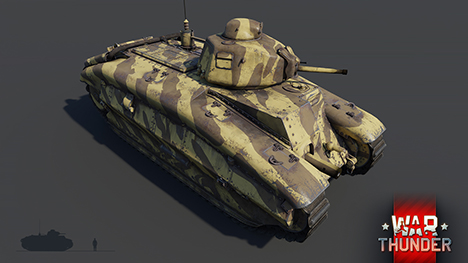 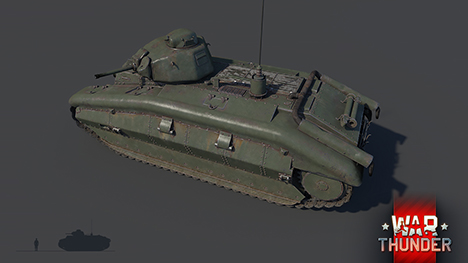 In War Thunder, the Char B1ter will be a premium vehicle of Rank II of the upcoming French ground forces research tree. Now fans of French military vehicles will have the chance to jump out of their cockpits into the commander’s seat of some of the most iconic French ground vehicles, including the most advanced modification of the Char B1!

Despite being classified as a medium tank by weight standards, the Char B1ter’s 350 horsepower engine only managed to bring the vehicle up to a speed of 30 km/h on roads. Though this may seem fairly low in comparison to similar vehicles of other nations, the Char B1ter was conceived as a “battle tank”, intended to breakthrough the enemy’s lines, whilst also providing support for infantry.

Naturally, a tank intended for this role had to posses two crucial characteristics - thick armour protection and powerful weaponry. Luckily for the Char B1ter, it has both. The armour protection goes up to 70mm thickness on the front of the vehicle, not accounting for sloping, whilst the turret features 56mm of cast steel armour all around. The Char B1ter, while likely becoming one of the toughest nuts to crack at its rank, is still far from invincible. Some of the more potent lower ranking cannons, as well as rockets and bombs still present a great threat to the not so mobile B1ter.

When the ability to pack a punch is concerned, the Char B1ter surely delivers one, actually, two punches! Armed with a 47mm cannon mounted on a fully rotatable turret, as well as a hull-mounted 75mm cannon, the B1ter is capable to bring a lot of destruction to the enemy ranks. The 47mm cannon is intended as the primary weapon for use against hostile armour. It features decent ballistic properties and a high rate of fire. Contrary to this, the 75mm howitzer mounted in the front of the hull is severely limited in its movement on the horizontal axis and also has a lower rate of fire. However, the howitzer does have the capability to fire AP ammunition with a generous amount of explosive filler. Although firing these AP rounds at targets from far range will unlikely yield any results, close quarter engagements are where the howitzer really shines.

Commenting is no longer available for this news
Rules
Sidescrape
42

When will we get new original sounds instead of recycled German sounds?

I agree, when will we get a wider variety of main gun sounds? :-) regards, Jackalan23

What happened with the good videos in these vehicle previews? The ones where you actually had a chance to see the tank in movement. These last rapid-flashing epilepsy-triggering videos switches view so fast that there isn't time to see anything at all: i.e. the serve absolutely zero purpose. Feels like a waste of developer time to make them if they don't show anything. =/

the chains should have an animation of their own, or remove them. should be the same or similar to the premium KV bucket.

I doubt that we need to have every chain link to be separate physical object ;)

Stona_WT, Eh, actually I think you guys do need that ;)

what do you mean?

OFW_Schroedinger, He means that some of the chains will be animated, some not.

With every country getting a ''Land Battleship'' will the French receive their Char 2C?

My guess is that we'll find out soon™

Typical WT staff don't respond to a comment with an actual question -.-

Already bought all 3 :D love you guys at Gaijin!

Good stuff Gaijin. By the way, any plans for the Renault FT?