The Lockheed  B-34 Ventura is planned for an upcoming War Thunder Update, and can be seen as larger, heavier and faster version of Lockheed Hudson.

In September 1939, the Lockheed aircraft company contacted their British representatives and proposed an enlarged, more advanced version of the previous Lockheed Hudson. The new aircraft was to be based on a civilian transport plane, in the same way the Hudson was based on the Lockheed 14 Super Electra. The new plane was however planned to be based on the larger Lockheed Lodestar. The British eventually accepted the proposal and ordered 675 units.

The resulting aircraft, named Lockheed Ventura, was visually very similar to the Hudson. In fact, the overall layout was nearly the same, only bigger and heavier. The original Lodestar was powered by two Pratt & Whitney R-1820 radial engines producing 1200 horsepower, which gave the aircraft a good range in exchange for lower speeds. However, the British planned to use the Ventura as a medium bomber and demanded higher speeds. Lockheed engineers thus equipped the Ventura with more powerful Pratt & Whitney R-2800-S1A4-G engines, producing 1850 horsepower each. These power plants allowed the plane to be approximately 80 kph faster than the Hudson, but the operational range was reduced.

The RAF equipped three of its bombers squadrons with the Ventura (designated as the Ventura Mk I) and it flew its first combat mission in November 1942 with them. However it suffered heavy losses during daylight raids on targets in Netherlands and only after a few months of service, it was replaced by the much faster de Havilland Mosquito bomber. British crews were complaining that the bomb load was too light, despite the fact Ventura could carry twice as much load as the Hudson. In attempt to improve Ventura’s characteristics, a new version designated as Ventura Mk II was ordered, equipped with more powerful R-2800-31 engines producing 2000 horsepower. The subvariant of the Mk II, the Mk IIA then had an American equipment and armament and was intended to be delivered to the British, but in reality, only 25 Venturas Mk IIAs were ever delivered. More than 264 Mk IIA’s were seized by the USAAF and renamed to B-34 Lexington. While performing the occasional anti-submarine patrols, the Lexington was much more useful as a trainer plane for American bomber crews. It however server as a basis for the Lockheed PV-1 Ventura naval bomber, which was basically only a navalized B-34.

If you’re familiar with the Hudson, you know it as a very agile, yet lightly armed twin-engined aircraft. The B-34 is exactly the opposite; it’s bigger, heavier and can carry much more ordnance. Due to the added weight, the B-34 has much higher wing loading, meaning you cannot expect to turnfight enemy fighters like in the Hudson. Because of that, the B-34 is more of a conventional bomber, trading the agility for speed, bomb load and defensive armament. Just as in real life, the B-34 is significantly faster than the Hudson due to more powerful engines, but it’s still not fast enough to evade enemy fighters. That however does not mean the B-34 is defenceless. The aircraft is bristling with a total of eight 12.7 mm machine guns -  two of them are mounted as fixed armament in the nose, four are mounted in nose and ventral flexible mounts, and another twin mount is located in the dorsal turret. This makes the plane a very dangerous target to attack, especially for low-tier aircraft, and as usual with American bombers, the fuselage is sturdy enough to withstand some serious punishment. The plane can carry up to 3000 lb of bombs (1361 kg). 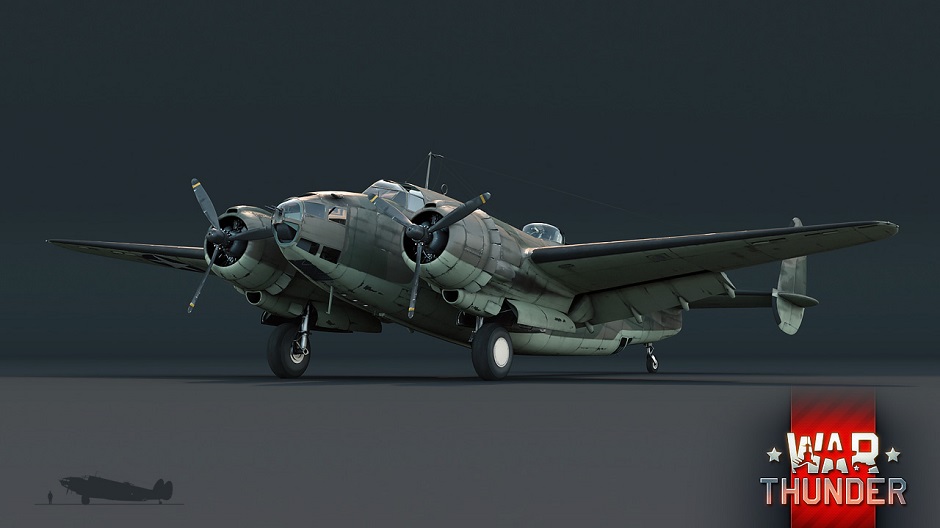 Commenting is no longer available for this news
Rules
Cervomix
21

I'd dream to see you guys implement paratroopers dropping on special zones (a bit like bombs on bases), to capture points. That would allow more transport planes to be implemented in the game.

Max payload: 100 Nigels (if British that is)

Some transports like the C-47 are already in-game. There used to be a mission on WT Live where you could fly a C-47 during the Normandy paratrooper mission.

TheColbster, really? That's cool. I wish I could have played that. All the more reason to bring this idea into the game

Very cool! Love the new content. Just a little question: will we ever see visualized individual bullet holes in all the beautiful aircraft and penetration holes in tanks? Thanks;)

I am pretty sure we have something like this in tanks. In aircraft - do we need them? It's not resource friendly.

Stona_WT, We dont need it but could you make the hole models reflect the caliber that it was shot with. Now if you get hit by 37mm AP round in wing you get 1 big hole and 50 small holes

You wonderful devs at gaijin have been adding a lot of US bombers. Does this mean we are closer to getting the B-26 Marauder?

We can only hope so right?? Beautiful beast

Alpha_Juliet, ya i want it in game but only if it is at the right br from the get go. no more Tu-4s pleas.

Hopefully the next bomber is the B-36? Just two numbers higher, don't worry about anything else!

Hopefully the next bomber will be the B-26. Remember the Marauder!

Hoflitch, That's what I said! Keep asking them about it on here and Live.WarThunder. It's so pretty <3

Nice to see that the Ventura is coming! I love flying the Hudson so far! :) When will you add the bomber Mosquito? I cant wait for that...