The Soviet D-3 torpedo boats were produced at the same time as the G-5 boats, but were capable of completing a far greater range of tasks than their competitors. Meet a new boat in the USSR tech tree!

The small D-3 torpedo boat was designed in Leningrad throughout 1939-1940. In August 1940, an experimental prototype was accepted for testing by the Black Sea Fleet, the boat being deployed in the same year. Although the D-3 differed only slightly from the G-5 in her armament and size, she showed excellent potential in terms of the tasks it could complete. The D-3 stood out from its competitor with her higher maneuverability and range, reliability of parts and of the design as a whole, her improved navigational equipment and the presence of a habitable deck allowed the D-3 to be used as a light and quick landing transport.

The military effectiveness of the D-3 boat is perfectly illustrated by the actions of these vessels in the course of the amazingly successful landing operation by the Soviet Northern Fleet in Liinakhamari and the military action that preceded the winning stroke. The D-3 boats not only effectively fought against Axis convoys, but also played a decisive role in capturing artillery batteries at the fiord of Petsamo, delivering landing parties to enemy fortifications under devastating fire from the shore. This military operation showed the excellent survivability of the D-3 – although her hull was constructed from wood of various types, the torpedo boats could withstand hundreds of penetrating hits and still get her crew out from under enemy fire. 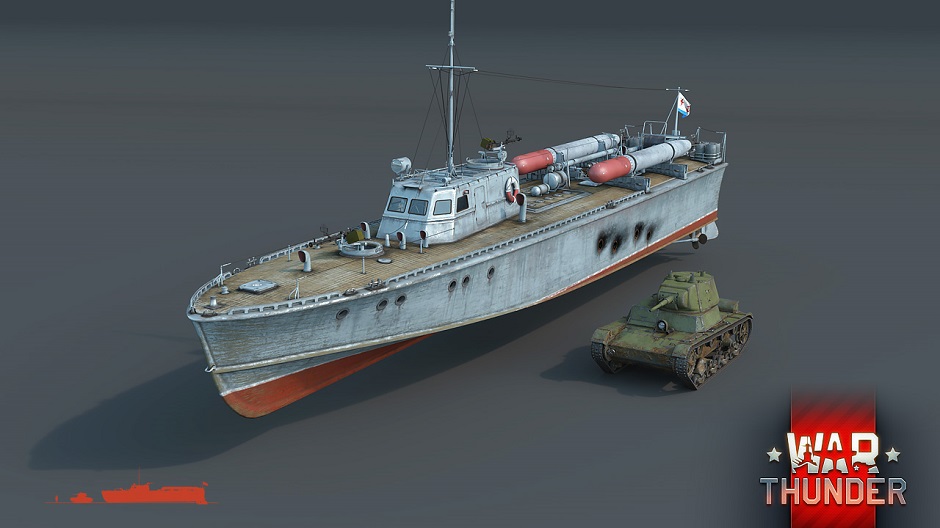 In War Thunder, the D-3 torpedo boat is coming to the lower ranks of the Soviet naval tech tree. She is a small vessel, a little more than 22 meters in length, with a water displacement of 36 tons. Her powertrain consists of three GAM-34 gasoline engines, which provide the boat with a maximum speed of 32 knots (60 km/h).

The boat is armed with two 533 mm calibre 53-38 torpedoes – the same as equipped on the G-5, but this time launched by being dropped overboard in line with the boat’s direction of movement. The D-3 has a complement of 9 crew members and is equipped with two high-calibre DShK cannons and depth charges.

The D-3 torpedo boat will be one of the first boats available for testing to participants of War Thunder’s naval warfare closed beta test. Raise your anchors and be among the first testers of the War Thunder navy. See you in battle!

Char 2bis: the Beast of Champagne
Share the news with your friends!
Discuss on the Forums

Commenting is no longer available for this news
Rules
Kulcsos12
13

Another ship from the "Good" side. When we will see some "Evil" Axis ships?

4 days ago we introduced Japanese ship. I am pretty sure they were Axis :) https://warthunder.com/en/news/4303-development-t-14-class-torpedo-boat-single-engine-seafarer-en/

Stona_WT, Japanese boat. Weak engine, as all of their boats for the entire war (Confirmed in the article), using pre-ww1 torpedoes (only a few knots faster than the T-14 itself - many enemies should be able to simply outpace the torpedo in addition to dodging it), and the 12.7mm or 25mm (two variants for tech tree) has extremely limited ammo before a reload is necessary (30 or 15 shots, respectively). The D-3 in this article is said to be able to survive hundreds of hits, so boat killing = crew killing?

Everyone is bad XD make love no war

Look, we have another russian boat. Yet everybody know, that russian was know for his mighty big fleet during world war 2. Give us information about the real navies. At this moment the russians have more boats then anybody else.

At this moment we did not even started CBT. And you will be surprised how many ships Russians have in their fleet. Lack of Pearl Harbor in European WW2 theatre left mark in popular history.

PilotAwesome_FIN, USSR has 6 boats and 3 of them are totally fucked up when they meet their enemies, so dont complain plz

All small boats, and no very large boats, my jaw is not dropping.

Same for me man.I am really grateful for hard and good work adding these boats but I'm not that interested in NF... I want French,Italian and Japanese tanks :D

EnkoACE, I've been anticipating Italian vehicles and ships for a while now, but I can't say I'm excited for the naval aspect at all in this game if they aren't going to include playable capital ships. Hoofully they soon realize Italy was indeed a country with its own thriving airforce and army! I still don't understand why they would bother including an Italian aircraft carrier into the game if we won't get to use anything bigger than a fishing boat.

When you play world of warships you quickly realize that playing capital ships is only possible with accelerated time. Closing up a distance of 20 km to a warship is no fun in real time. War Thunder's aim ist to combine ships, tanks an planes in real time. Up to now they created a very unique and thrilling game I play for years now. I have trust that with their boats they will create something new, unique and thrilling too. This little boats surely have the potential for action.

What about its fishing equipment? Don't tell me it doesn't have nets.

Only for trolls from comments :P

could catch depth charges in a trawling net before they get too deep :O :O :O

I bought both ship packs months ago and still waiting for the CBT. I am a Mac user. How will CBT be accessed? Will I have to download a special file or something? Please Gaijin let me know. Also when is CBT coming out?? I want to request off of work :D!!!!!

As we said in CBT news some time ago, test will be held on production server in special events. So you will not be required to download special launchers etc. :)

Stona_WT, Thank you for the quick response.

Maybe same like Ground Forces CBT?If you got a CBT access,you get a patch to download in the launcher.

nice, though some planes would be nice for a change...

Stona_WT, Who knows you could have NAVAL planes. Hmm on the subject of planes would Bombers and CAS get their bombloads that where Depth Charges

i know this was a joke but the only bias for russia i saw since the 11. august is the ship with those two t 34 turrets and the pt 1124 and they are so slow and huge compared with the torpedo boats that they are easy targets for all incoming torpedoes, so no bias at all xD

Uh. A small boat, again. I know it's reserve, but when will you show us something more juicy?

Never. Their will not get much bigger.....

sgtalbers, depends how the CBT goes, i hope we get heavy cruisers next 2 years, but its ok for now, to start the naval forces with smaller vessel.

I'm seriously curious to see how Gaijin is going to fill up these "Naval" techtrees with boats, so there is still enough of them to be 2-3 on each tier.

Most of people want Japanese,Italian and French tanks xD No one cares for Naval Forces that much..

Easy (or at least easier..) - a separate boat every time armament changes. So T-14 class for Japan is at least two boats - one with the 12.7mm, other with the 25mm.