The small T-14 Class torpedo boat used by the Japanese commanders will be one of the first vessels in War Thunder naval battles.

During wartime, a range of problems were revealed in the industry of Imperial Japan. For example, the Japanese did not have the necessary infrastructure to produce modern petrol engines and thus were incapable of manufacturing powerful torpedo boats, even though there was a great need for this class of vessel. The Mitsubishi company proposed a design for a small single-engine torpedo boat that was equipped with a 920 hp petrol engine. In spite of its small size and low power, this engine was capable of carrying two torpedoes. By decreasing the weight and dimensions of the design as much as possible, the Japanese were able to mass-produce these little torpedo boats. And so the T-14 Class torpedo boat was born – an entirely wooden design, just 15 meters long, and with a displacement of 14-15 tons.

This little Japanese boat was nonetheless well prepared for an encounter with the enemy. Shipbuilders mounted two torpedo tubes, housing Type 44 torpedoes (450 mm caliber). In the stern, there was enough space for six depth charges weighing 160 kg each. However, the boat’s anti-air armament was weak: all she had was a high-caliber 13.2 mm machine gun with a 30-round magazine. The subsequent modifications received the Type 96 25mm Gun. Its magazine could only hold 15 rounds, but a cannon is a cannon. The machine gun had a hard time effectively defending the boat. 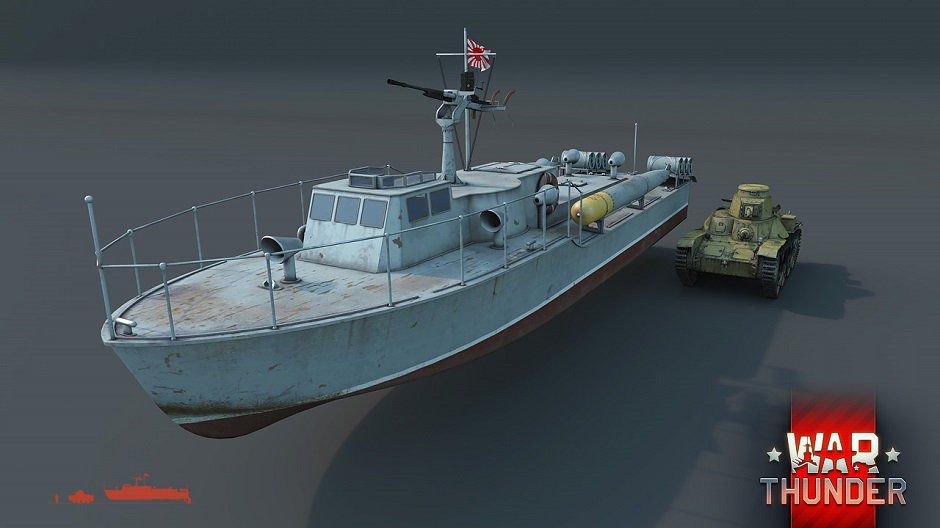 In War Thunder, the early-series T-14 Class torpedo boat is at rank I in the Japanese naval tech tree. The boat is definitely small, even in comparison to her contemporaries – for perspective, the Soviet G-5 is 19 meters long, but even she is significantly larger than the 15-meter Japanese boat

The boat has one engine and one screw propeller, so her speed is relatively low: her top build could only reach 33 knots. The single magazine in the boat’s machine gun can be changed every 30 shots relatively quickly, but you have to fire very carefully and accurately. Admittedly, this machine gun does work quite well against aircraft, often causing fires when it does hit. The torpedoes are an undeniable advantage on the boat. The torpedoes are launched from the boat’s sides directly in her line of movement, making them very easy to aim! And don’t forget about the depth charges – they can give the enemy a nasty surprise.

Commenting is no longer available for this news
Rules
MrMakWASP
6

After seeing "T-14" in the title, for a second I thought Gajin had gone insane.

Why? I really want the T14 in the UK tech tree, would give it an APHE shell in tier 3. UK needs more prems.

So other than than torpedoes it will completely ineffectual against everything? boy I seriously cannot wait! /s

It has Torpedoes, Depth charges and a high caliber MG that can damage other ships.

Smin1080p, well unless the torpedoes are running on the surface or depth chatges are exploding on impact with the water I dont see how they will damage another boat (not ship) and everything I can find on the MG states that its got about 17mm of pen..

this is tier 1. remember?

If only Japan had a pre-order bundle I would be all over it.

I see you're still showing the puddle jumpers.... I'm still waiting for the answer on the question about frigates.

Further ships will be explored in the CBT.

CBT will answer your questions, dont complain and whine here, do it in the forums

Only the machine gun on that would ever have been used against other torpedo boats in real life. Torpodoes do not run on the surface and depth charges aren't used as naval mines, this isn't Assassin's Creed.

Only the machine gun on that would ever have been used against other torpedo boats in real life. Torpodoes do not run on the surface and depth charges aren't used as naval mines, this isn't Assassin's Creed.

please snail lords I haveleft u many offerings of preacous bills in return for the eagles of gold. so answer me this during the 50% off event what will happen if I use a 50% off discount I own in game? will I be given the plane for free?

How can i access the CBT when it starts? I've bought the PT-109 and i've never been on a CBT

You can purcahse one of the CBT entry packs from the Gaijin store, or stay tuned for future events. Access information regarding the CBT will be available around the time it goes live :)

ZeSquirrel, He asked how you can enter and he gave the exact answer. You either buy one of the two packs or wait for a future event that can give you access.

type 96 AT/AA gun. limited by low magazine capacity, heavy recoil during sustained bursts, and slow traverse on powered mounts. still, had good range, and up close was known to take down planes with 4 round bursts, so should be interesting