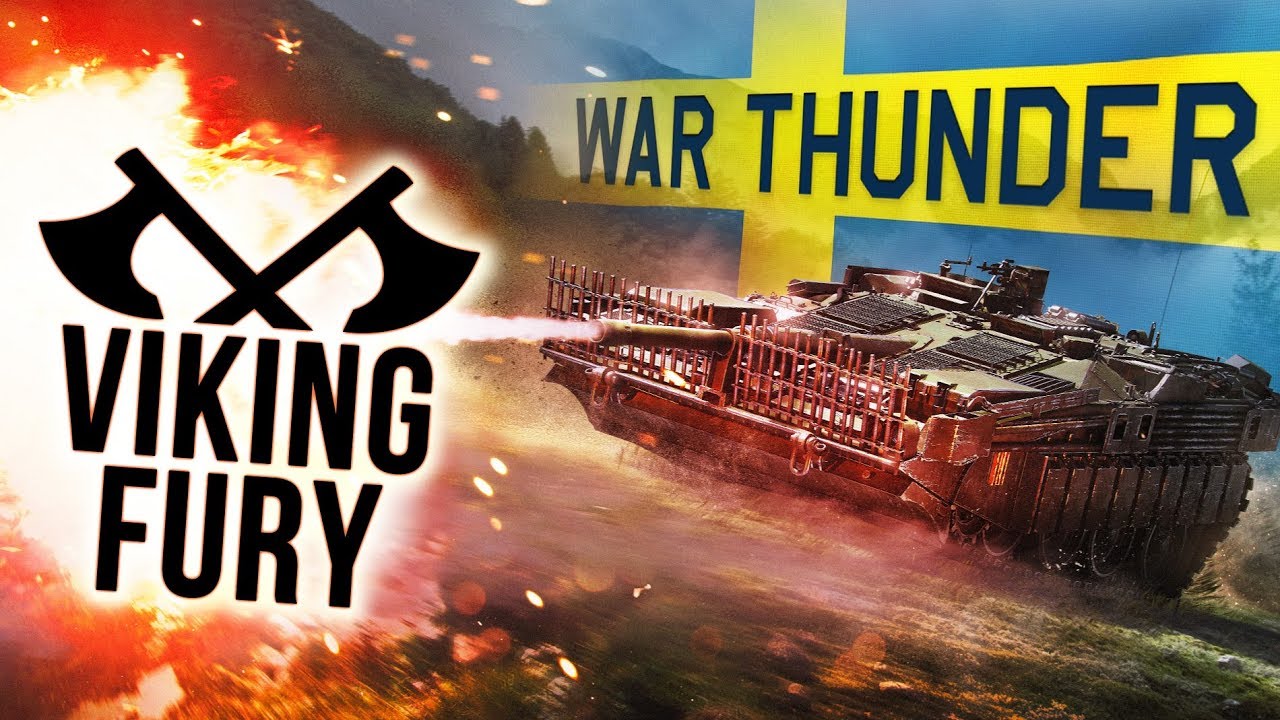 The Vikings have landed, now they are furious, the anticipated Swedish ground forces research tree is here! "Viking Fury" brings over 50 new vehicles including ships, aircraft and all the armour you can eat.

An experimental tank destroyer fitted with a pair of Oerlikon 81mm rocket launchers, developed by the Swedish Landsverk company in cooperation with Daimler-Benz in the late 1950’s.

An experimental light tank developed in the mid 1990s, with a stabilized 105 mm gun, thermal vision and laser rangefinder.

An early 1940’s Swedish medium tank, developed by the AB Landsverk company, with a good frontal protection and a quick-firing cannon.

Over 25 new Vessels, Ground Vehicles, Helicopters and Aircraft for other nations

a heavy cruiser of the British County-class built in the interwar years, with hard-hitting 8’’ (203mm) guns and good anti-air firepower.

A further development of the Chinese ZTZ96 MBT, with additional ERA packages and a more powerful engine.

A British supersonic Cold War jet fighter with a fantastic acceleration, and capable of reaching mach 2.

Developed during the mid 1970's, the AH-64 Apache represents one of the most widely used and recognizable attack helicopters in the world. Several version will be added to War Thunder, the basic version AH-64A, the upgraded AH-64D "Longbow", the British export version Mk.1 and the Israeli premium "Peten".

During the first two weeks of the sale start, you will receive a unique decal and a title as a bonus! The bonus will be applicable until March the 30th, 2020 at 09:00 am GMT.

A new location for aircraft battles in War Thunder, based on the surroundings of the Kattegat Strait and the cities of Aarhus, Odense and Kalundborg.

Players with Premium Accounts have been given extra 12 hours of premium time.

FM_Hikari, how did they pay for a extra 12 hours?

Problem with rewards multiplier in RB battles should be already fixed. We are sorry for inconvenience!

No problemo... Thanks for being so speedy!

It seems rewards for RB tanks is reduced aswell? Something wrong?

There seems to be something off with the rewards in Air RB (only thing i have played yet). I seem to get AB reward.

Yeah im getting the same problem.

There are plenty of bug fixes and game balances changes, check the full changelog please :)

Stona_WT, It be nice if actual map get balanced/reworked for larger scale rb/sb MBTs battles, with possibility of more than 3 zones (5~7 perferibly)

Target_ON, Shouldn't have to fight a full BR higher.

Thanks for adding Sweden <3 :)

There seems to be something wrong with the rewards in RB modes. Getting Arcade reward modifiers instead of RB ones.

I think they replaced RB rewards with arcade. I just got a match where I was able to kill 2 players and only recieving 12k sl instead of 46k whilst killing the same amount of players with the same plane.

Please add the Stug IV in the next update

We are working to solve this issue

Stona_WT, How about the AB rewards given in RB?

When will you fix rewards for RB thats bugged?