An export version of the American Iroquois for the German army with an enlarged fuselage, a new rotor system, and a new engine!

Experience using the UH-1 multipurpose helicopters revealed that this aircraft had no noticeable flaws and turned out to be quite effective. Needless to say, the success of the Iroquois helicopters did not go unnoticed by allies of the United States. When the USA released the UH-1D model, the West German government agreed to purchase a license to manufacture the latest Iroquois helicopters at German factories, particularly those of the Dornier company. Between February 1967 and the end of 1981, German aircraft manufacturers constructed 352 UH-1D helicopters.

How is the UH-1D version of the Iroquois helicopter different from the base one? First of all, in terms of size. The payload of the UH-1B was increased greatly, so  in the UH-1D modification the fuselage was extended and widened, and the overall length of the helicopter was increased by over a metre. A new rotor that had a wider blade span was installed, as well as all-movable stabilizers like those in the UH-1C. The shape of the nose section of the fuselage was changed: the bottom of the hull was now rounded rather than flat, and the position of the antennae and signal lights were altered. The German manufacturer decided against the armoured pilots’ seats that were used in Iroquois helicopters during the Vietnam War, so the UH-1D has no armour on the seats. For the UH-1D in War Thunder, we have decided to introduce several weapon loadouts that have been used with the UH-1 series. 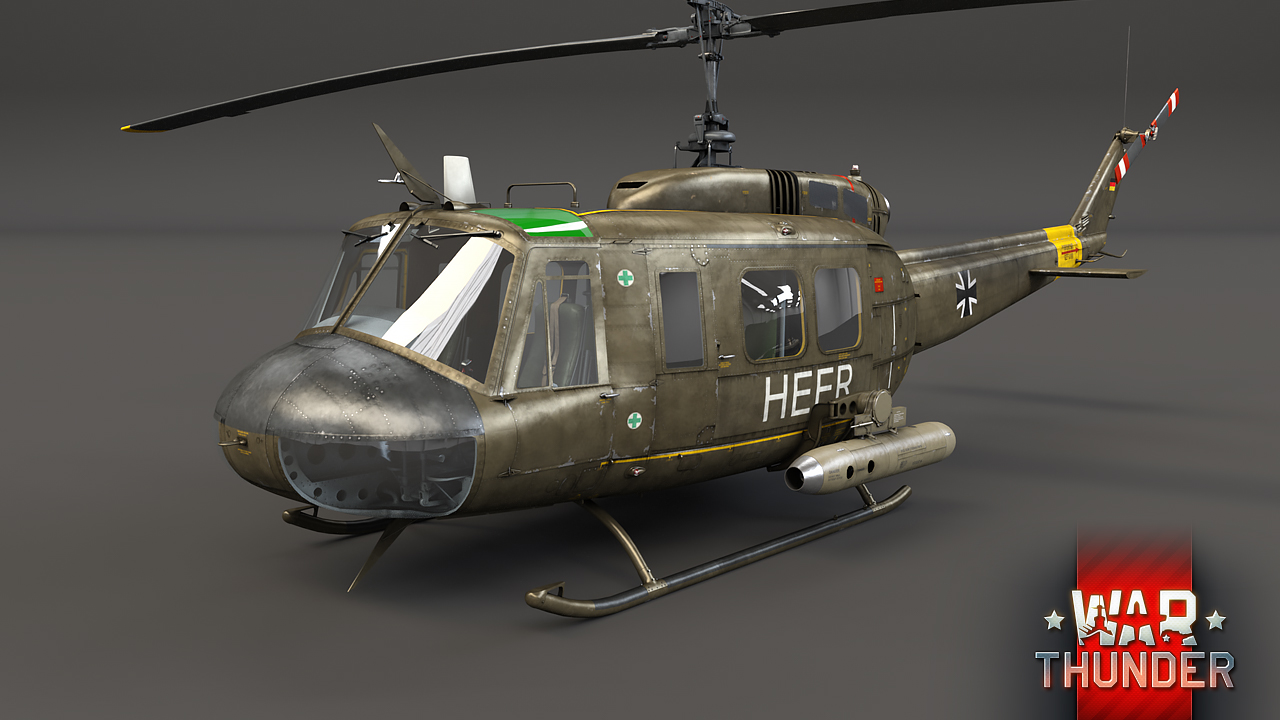 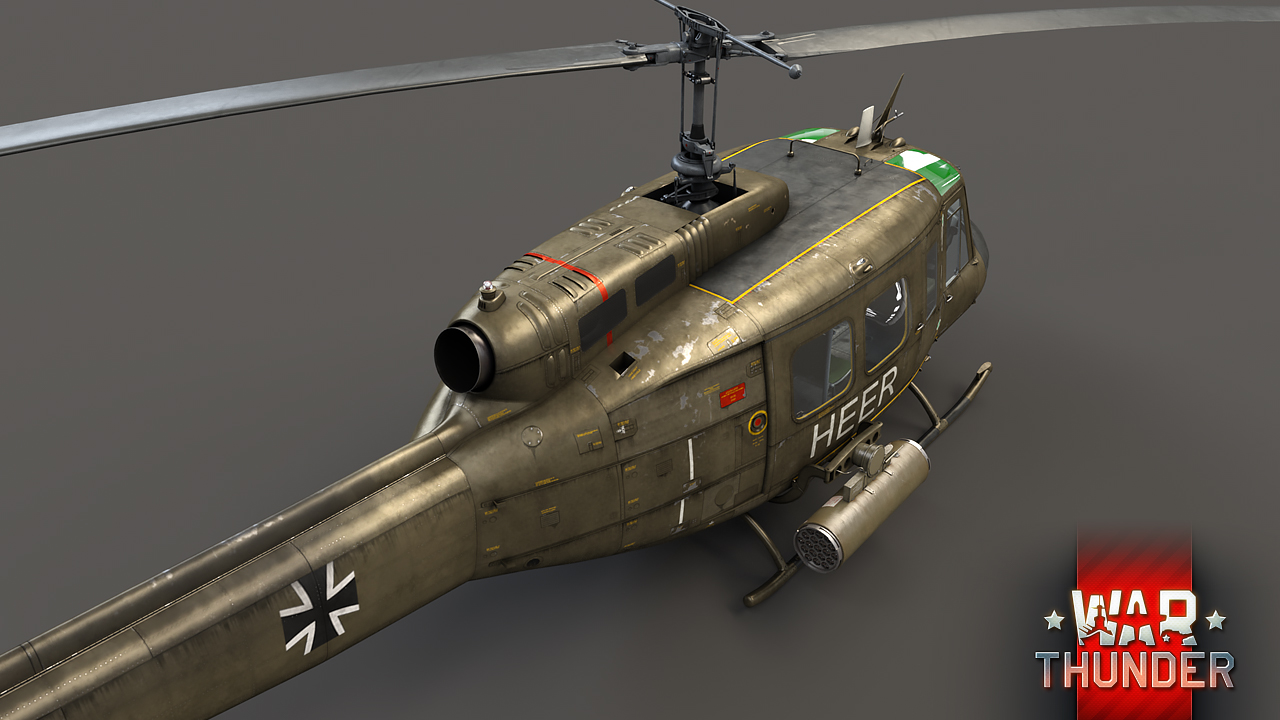 In the game, the UH-1D can be found at rank V in the German helicopter tech tree. Pilots of the German Iroquois helicopters will have access to six-barreled 7.62mm miniguns placed in two containers along the sides of the fuselage, unguided Hydra-70 rockets, and six AGM-22 ATGMs that can be used to penetrate most ground targets at its rank.

Like the American UH-1B and UH-1C, the German Iroquois fits into rank V battles well, and it also has the same potential to take on more advanced vehicles. Since the helicopter has no seat armor and only one engine, the pilot will have to learn to avoid any enemy fire. It would also be wise to research flak jackets for pilots as your first modification. Before researching the ATGM we recommend avoiding large-scale skirmishes with ground vehicles and focus on destroying “snipers” and light armoured vehicles. However, you’ll have a lot more options once you’ve installed anti-tank missiles. Those six missiles will allow you to calmly pick off several enemies during every sortie. As long as you keep your distance, aim your missiles carefully, and stay out of the crosshairs of anti-air guns, you’ll be unmatched!

The UH-1D will be available for everyone after the release of the War Thunder update 1.83!

Commenting is no longer available for this news
Rules
OFW_Schroedinger
18

normaly i would like this addition, BUT: germany never used them as combat vehicles, they were used for medical purposes and so on. so its basically a made up vehcile.

Hi! The weapons are not final. Obviously this helicopter will get weapons, but we got something else in preparation. (i know you're going to say "ok, but it's still weapons", apparently there was weaponized versions of that helicopter planned).

Ouiche, I'd really love to see the source on that, because nothing I can find indicates that there were ever thoughts of arming the German UH-1D/H models. Every source I read and personally know in the service tells me it was always unarmed, door gunners aside.

but... this never existed, the germans never used this helicopter for combat purposes. :/

stop with this "but this never existed" bs. the tiger 10.5 CM never existed but no one complaining about that

Two things: First of all, the entire article didn't mention it, so I guess you've missed the fact: The German UH-1Ds are actually UH-1Hs that were just designated as D's. That means some changes in construction and most of all, a way stronger 1400hp engine. Second, German UH-1s were never armed with anything more than door gunners. Don't bring fantasy armaments into the game when you have perfectly valid options like the Mi-8 to use.

why is the research cost for helicopters so much? I know the new rp change will help but that is still a lot when for the most part they are only used in tank RB.

Helicopter are still in testing phase, they are not fully implemented.

you have to remember that the tech trees of helos are extremely small, so researching all of them is still a lot faster than for any normal tech tree

AGM-22 is the U.S. designation for air-launched French SS.11. The Germans still called them SS.11, as you can see from the RJpz.2. What an elementary mistake aside from the fact that the German Hueys were never fitted with such armament. Another XP-38 level of fakery.

On the first devserver, this helicopter had the gunpods available only as a tier 3 modification, with the missiles being at tier 2! This is ridiculous and HAS to bee changed, you can't expect anyone to play this thing with only dumbfire rockets that long! The US version of the Huey get's the gunpods at tier 1!

It shouldn't even be armed at all. xD

Awesome to see. Though I would ask the balance over lords to lower the BR's of these SS.11 armed helicopters to like 8.3? Also look at giving the AH-1G a module to upgrade to the AH-1Q and use early gen TOW's (like 400ish mm pen and only 4 as the weight of 8 was quite a bit for the early G/Q's to handle. P.S. I am pretty disappointed in no M3 Bradley this patch :(

I don't need helos with guided missiles fighting my maus. Is ridiculous. Maybe lower them once theres less compression of top tier, but these things do not need to be fighting M103's, Mauses, and IS4ms.

I for one would love to see a mod added to all UH (US and German) choppers. That mod being door gunners, M60D door guns 1 per side with an AI gunner much like a bomber crew has. that players could switch to that view and use gun. Crews would also have to upgrade for accuracy not that i mind. Please give us door gunners.