The French SA.313B light helicopter acquired guided missiles and unguided rockets while in use by the German army. Meet the first helicopter in the German tech tree!

The light, multipurpose, single-engined SA.313B Alouette II (French for “Skylark”) helicopter was developed by the French company Sud-Aviation in the 1960s and was widely used both by civilian and military organizations. Many other countries also obtained a license to manufacture these helicopters. In addition to civilian use, this light helicopter has a rich military history. The SA.313B fought wars in Algeria and Rhodesia and took part in several local conflicts. The model’s success is demonstrated by the fact that the SA.313B is still being used for civilian purposes and by the militaries of some countries nowadays.

Since the SA.313B was not routinely equipped with weapons, this issue has been resolved directly in the places and countries where the vehicle has been used to fulfill combat objectives. The helicopter’s armament has been rather exotic at times, such as when rifles and machine guns have been mounted in the apertures of the glass-enclosed front cabin. For the purposes of the game, we have chosen more well-founded projects for arming the SA.313B implemented by French and German crews. Machine gun installations comprised of four 7.62mm MG3 light machine guns placed in pairs on the skids using special fixtures. As an anti-tank weapon the helicopter could carry SNEB unguided rockets, as well as SS.11 guided anti-tank missiles that were located on special transverse tube-shaped beams along the sides of the fuselage. 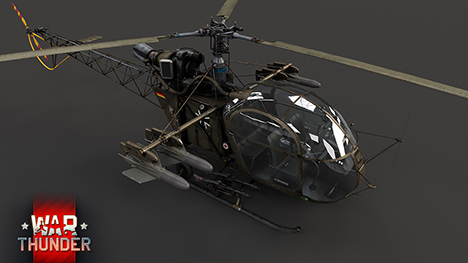 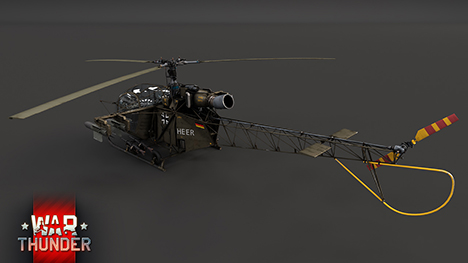 In War Thunder, the SA.313B Alouette II will be the first air vehicle in the German helicopter tech tree. This light helicopter, which is mostly just a structural frame, has one turboshaft engine and no armor whatsoever. The SA.313B’s turboshaft engine with slightly over 400 hp can get the vehicle up to 180 km/h. However, its light construction and low speed do not prevent this helicopter from representing a serious threat to ground vehicles.

Pilots will spend their first battles in the SA.313B with machine guns and unguided rockets in two units along the sides of the fuselage (2x36 37mm SNEBs), as well as guided missiles that should be quite familiar to our tankers and pilots of American helicopters: the SS.11 ATGMs, which have done quite well for themselves in rank IV-VI ground battles. You can install four guided missiles on the Alouette II, which makes it a full-fledged tank hunter and lets its pilot easily move on to acquiring the next helicopters in the German tech tree.

In War Thunder update 1.83 "Masters of the Sea", you will find new German helicopters and a lot of other great content. The update is coming soon, so keep an eye on our news!

Commenting is no longer available for this news
Rules
NightFalcon
9

It looks like it will get shot down just by looking at it :) Going to be an interesting game play

Well, look at its tail, i wonder how many bullets will just fly through it.

I_NAMELESS_I, You can't get hit if there is nothing to hit in the first place )

But Gaijin.. It's a french Helicopter, those SS. 11 are French, the French army put machine guns and missiles on it. Why is this German Variant the first variant in the game?

Also, when you say "The French SA.313B light helicopter acquired guided missiles...while in use by the German army." You make it sound like the Germans took the helicopter and were the first ones to attach missiles to it, this would be wrong, as the French army chose to arm this helicopter with ATGMS and machine guns..

ISurvivaI, so why don't put italians instead of this shit french? italians has the best chopper in europe and one of the best in the world... and the tanks? french didn't have and they put it first so don't complain on nothing...french is the nation with more captured (fake) vehicle in it

Because the German tree is being added in 1.83, not the French yet.

I was like yay French get their copters too ! \o/ Then I read "German tech tree"...

A proto of that helicopter apparently reached 8km altitude in the 1955-1956 tests, the pilots had some guts.

Ouiche, The Lama also built by Sud Aviation and wich is derived from the Alouette reached 12.440m, and then landed in autorotation, setting the record for the longest succesful autorotation... i think we are beyond guts at this point...

is this the first " Little bird " model ?

LounisDzSW96, The Little Bird is a specific helicopter, this isn't it.

Oh wow it looks beautiful... it's so good that another nation is getting helicopters so soon!

wow that close up on pilots in video clip :) hot damn!

So the most important and interesting french vehicles will i hope not be only for the germans in 1.83...