News
back to news
Attention! This news was published on the old version of the website. There may be some problems with news display in specific browser versions.
Development
14 March 2017

15 cm sIG 33 auf Fahrgestell Panzerkampfwagen II (Sf) a.k.a. Sturmpanzer II was a German Self Propelled Gun based on the modified chassis of the Panzer II Light tank built as a replacement and improvement for the Sturmpanzer I Bison, that was too heavy and presented a large vertical  profile.

The SPG was in production from 1941 with total of 12 vehicles completed. Sturmpanzer II weight was 16 tons and with its Büssing NAG typ GS water cooled 8 cyl. 7.9 liter gasoline engine it was able to reach up to 45 km/h on the road (15 km/h cross-country). Its maximum armour plating was up to 30mm thick and the vehicle was armed with the 15 cm sIG 33 howitzer, that was generally used as a heavy infantry gun until the very end of the World War 2. All vehicles saw duty in 707th and 708th sIG Kp (Sfl.) and while some were destroyed, the rest remained in the DAK and fought until the Axis surrender of Tunisia in May 1943. 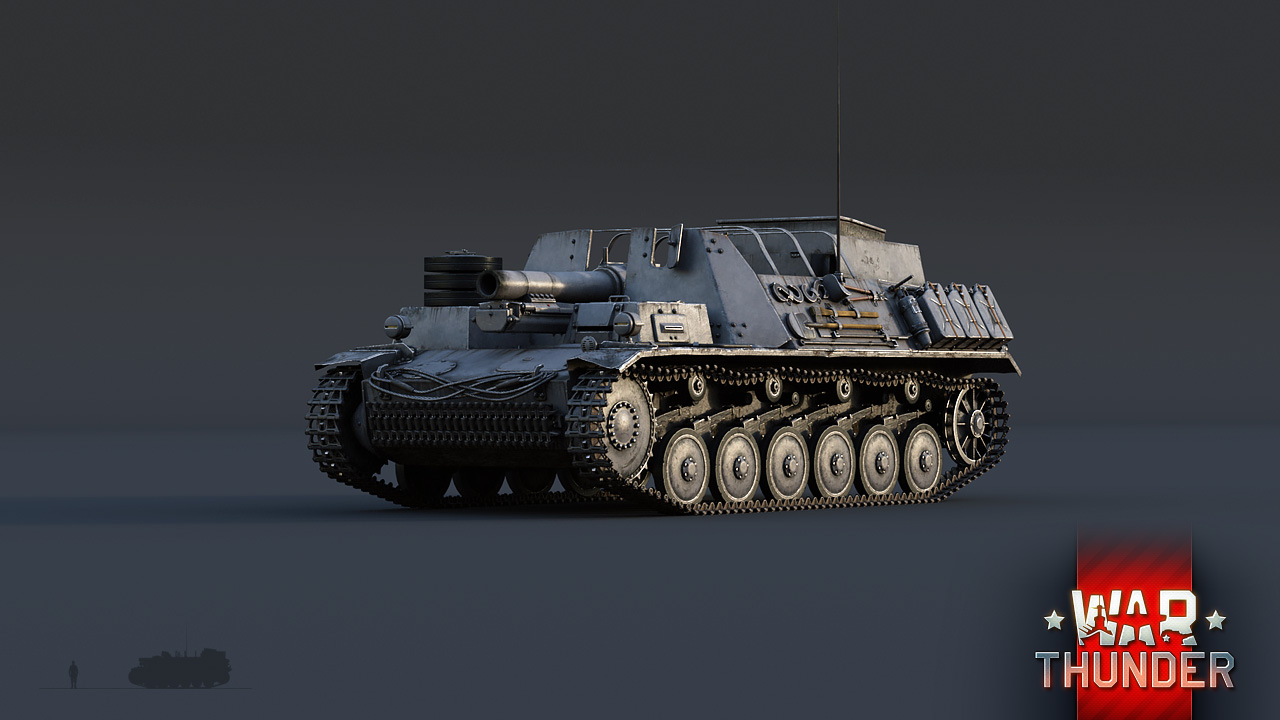 In War Thunder, the tank will be strong reinforcement for the low tier of the German Ground Forces Tech tree. With it being able to quickly relocate and strike with surprise even against the most armoured foes, it will surely not be an overlooked vehicle. The  low profile and a large 150mm howitzer makes you a very dangerous enemy. Besides, the Sturmpanzer II uses same shells as Brummbär, the mightiest HE charges in War Thunder so far.

Be wary of your insignificant armour and missing roof, this is an open-top vehicle that can easily be destroyed by even the smallest caliber machine guns in the game. Put some camouflage on your tank, add some bushes and hide outside of the frequent combat area. Use your rogue potential and play on your strength - your cannon that is able to one-shot most (if not all) of the enemies on your tier.

240 m/s HE shell mean's you can shoot people over the hill without even exposing your tank. Trust me, i have brummbär and its most fun tank i've ever played. First tank i'm gonna unlock when patch drops

Yea for the record, you can do indirect fire with many other tanks, lol

GreenAid, Yeah for the record, there aren't many shells that leave the muzzle bellow 300m/s in War Thunder. That's a lot more versatile than 'many other tanks', lol.

First tank i'm going to unlock when the patch RELEASES.

The real question is, will we get the Sturmpanzer VI? ;)

i hope so :P but for real do you realy think they would add a 380mm mortar if they denied the Churchil AVRE ?

OFW_Schroedinger, Churchill AVRE fires a slow moving shell that can blow up a bunker, while the 380mm mortar fires rocket assisted shell that somewhat equals a 500 kg bomb (actually stuck between a 250 and a 500 kg). I think I'd pick the latter :)

Please fix the suicide ramming of open roof vehicles with planes in AB! It get out of control. Any such vehicle becomes a target immediately.

Guys i really want to become a tester on the dev server but I dont know how !

You can test vehicles on Dev Server when we open it for public. You need to follow us on social media and check info on forum.

This adds so many open slots for new tanks.. bring us grille, hummel, GW panther etc. ;)

masterchief262, none of which existed in real life, not even blueprints, not even a napkin idea, just made up by people with no better waste of time

Next up 15cm sIG33 (Sfl) auf Jagdpanzer 38(t) Hetzer, i mean cmon, its the perfect 5.0br SPG with the same gun/shells. 26 made/transformed from regular Hetzers. A hetzer with a 150mm cannon, open top, it looks amazing. Pls gib.