The British Centurion Mk I medium tank was the first serious attempt by the British to create a tank for a new era. We are proud to present the forerunner of the illustrious line of tanks in War Thunder.

Every nation that was embroiled in the Second World War gained invaluable experience in battle, which had a material impact on the subsequent design and development of military technology. British engineers were no exception. In their first post-war tank, the British strove to move away from the outdated tanks classification (Cruiser and Infantry). Work on the new project began as early as 1943 and aimed to combine the best features of both classes. The result was the Centurion Mk I, the first British medium tank and the forerunner of an extensive series of new-style armored vehicles.

The first Centurion was produced in a series of 100 vehicles between 1946 and 1948. Compared to the cruiser tanks of WW2 period, the tank’s armour was considerably improved – the upper and lower hull plates were now 76 mm thick and came together at a sharp angle. The turret was given mixed armour – a cast front section shifting to a welded rear section – that was up to 127 mm thick at the front and 89 mm thick on the sides. The Ordnance QF 17-pounder Mk 6 caliber 76.2 mm gun was selected for the tank, and became the new artillery standard in the British Army in the immediate post-war period. With its heavy armour and weight totaling almost 42.5 tons, the Centurion was never going to match the Comet for speed, and was in fact slow for its class. 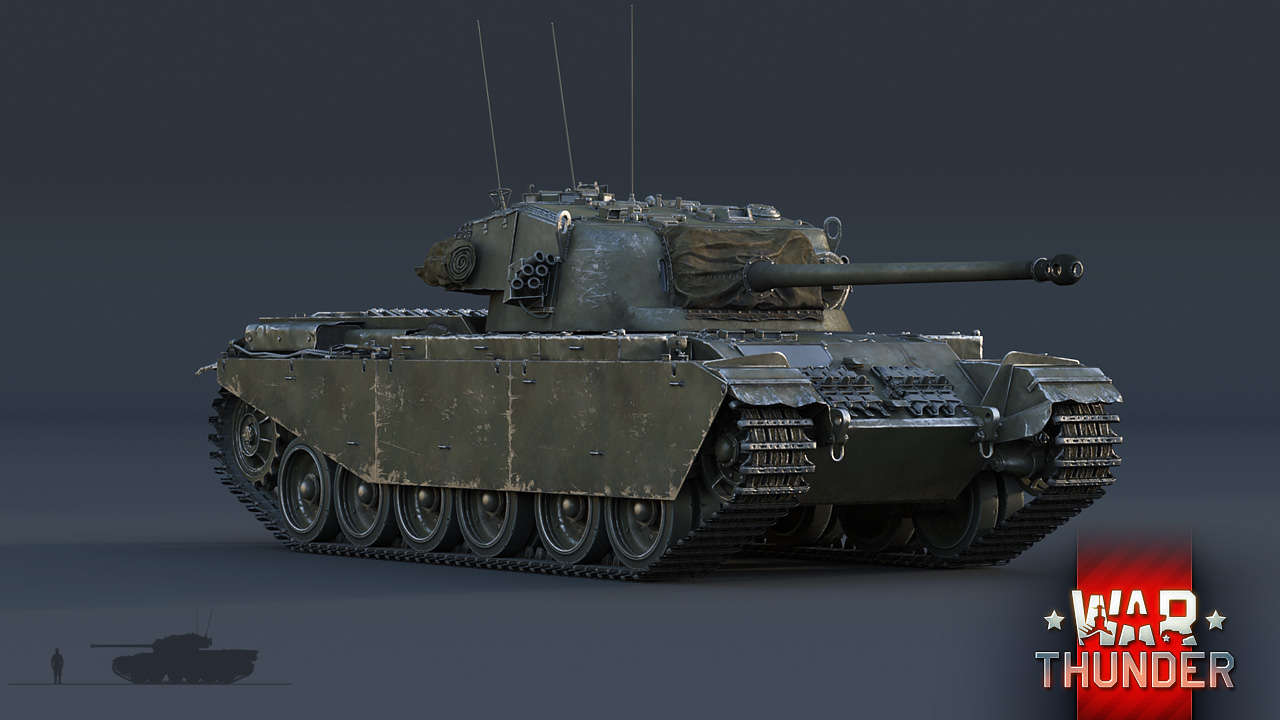 In War Thunder, the Centurion Mk I will take its place at rank IV in the British armored vehicle tech tree, right before the FV4202. For tankers researching the medium tank branch, the first Centurion will be a breath of fresh air – the first medium-rank British tank that you can play “from the armor” and take into tank duels with a chance of withstanding enemy assaults on the front of the vehicle. The reinforced armor is unavoidably offset by low speed and mobility. The Centurion has very swift and smooth turret rotation and vertical aiming angles of -12/+20 degrees. The famed 17-pounder easily dispatched a number of rank III opponents, but it is not as effective against rank IV, although it remains as accurate and dangerous as ever. On the whole, the firepower is more than sufficient to stand you in good stead until the Centurion Mk 3, which boasts more serious firepower, better armor and a more powerful engine.

Due to its low speed, the Centurion Mk I is a single-direction tank on the battlefield. The Centurion serves well both in defense and in a fixed-position offensive. Guard the sides, meet opponents head-on with your robust cast front and the tanker gods will smile upon you!

The Centurion Mk.I will be added to the game in the upcoming major update – follow the news!

Commenting is no longer available for this news
Rules
xXDragonJacobXx
29

Why was it decided to add a version without the 20mm coaxial gun? It would have made it special. :/

This version won't have a 20mm coax, but the door is not closed for another centurion with a 20mm - we'll see.

The 20mm Polston was disliked by crew members on the inital Mk Is, so late production Mk Is and subsequent Mk IIs had a BESA machine gun.

Smin1080p, Then you have the opportunity to make a prem tank for the British :) Centurion Mk I with the 20 mm as coaxial gun. At the same BR as the Tech tree variant. The Brits need more prem tanks :)

please add the one with the 20mm coaxial gun :X

The cover is simply a design choice. It could have been with or without, it makes no difference to the tank. The 20mm was disliked by crews on the first Mk Is so later models had a BESA machine gun.

Smin1080p, Did that "Designer" take into account that when changing camouflage, the pointless cover that wasn't utilized in reality will remain green?

Nice tank! Weldone Gaijin! Will we see other interesting british tank like the Fv 4005 stage II?? *_*

PvTsmile, Because btt needs something of interesting at Tier5 and because i love this tank

I'm surprise this wasn't added in desert rats because with the centurion series it goes 17 pounders ,20 pounder then the 105mm gun then finally 120mm. This could of been made before d-day but Britain had a problem with raw materials and the tank was still in testing so they decided the more cost effective method would be to stick their 17 pounders on lend lease Sherman which thus became the Sherman firefly. If the Pershing and centurion tank came before D-day history would be different.

The War Ministry also was not in favor of any tank that would not be ready in time for 1944, so the Centurion was delayed significantly longer than it needed to be.

Smin1080p, is there a possibility of the centurion with the 120mm cannon being added as well possibly and updated chieftain in the near future and also thank you for replying

hey gaijin u deleted my argument with 32 thumps ups! so am right!

I got avidence! I made Screenshots so! Separate WII era with Postwar! NO ATGMS VS WWII!

HardeKern, gaijin KGB at its best.

what kind of ammo it will receive ? I hope that all "older" rounds will be removed and only mk 8 and APDS will be available to avoid very painful stock syndrome

Anything planned for the massive gap between Avenger and Charioteer?