HMCS Haida is a Tribal-class destroyer of the Royal Canadian Navy, which served not only through WW2, but also took part in actions in the Korean War.

At the helm of the iconic Haida, captains will spearhead the Royal Navy’s advance into War Thunder naval battles with one of the upcoming updates for naval forces!

Briefly: A Canadian Tribal-class destroyer with upgraded anti-aircraft armaments that will be located in the British naval research tree, providing additional in-game benefits thanks to its premium status.

HMCS Haida was laid down on the 29th September, 1941 at the Vickers-Armstrong dockyard in Newcastle-upon-Tyne. In August 1943, the ship was launched and entered RCN service shortly afterwards. Haida’s early service life is marked by escort duties as part of various Arctic convoys. In spring 1944, Haida was was tasked to perform sweeps along the French coastline. Haida scored her first kill, sinking the German T-29 destroyer along with other members of her task force in April.

Prior to D-Day, Haida continued to run sweeps along the French coast, periodically engaging in skirmishes with German destroyers and torpedo boats. After sinking a German U-boat, Haida paired up with the Polish destroyer, Blyskawica in actions against German surface vessels off the western coast of France. During one such raid in August, Haida was damaged by a German ship - a 105mm round hit the stern section and returned to Halifax in September.

After repairs and refits, Haida continued her service off the coast of Norway in March 1945, serving as an escort and assisting in various operations. After the German surrender in May, Haida was sent to the Pacific in preparation for the invasion of the Japanese home islands. Whilst undergoing tropicalization refits however, Japan surrendered. This marked the end of WW2 and Haida’s service as part of it.

In the postwar years, Haida switched between reserve and active status as well as undergoing several refits and upgrades. The Korean War called for Haida’s service one final time. There, the ship operated as a destroyer escort, primarily performing shoreline bombardment and patrols.

After the Korean War, Haida was ultimately decommissioned from active service, but avoided being scrapped by being turned into a Toronto attraction in 1965. In the early 2000s, Haida underwent extensive restoration before becoming a National Historic Site at the Hamilton Waterfront. Today, HMCS Haida is the ceremonial flagship of the Royal Canadian Navy and still welcomes visitors from all over the globe. 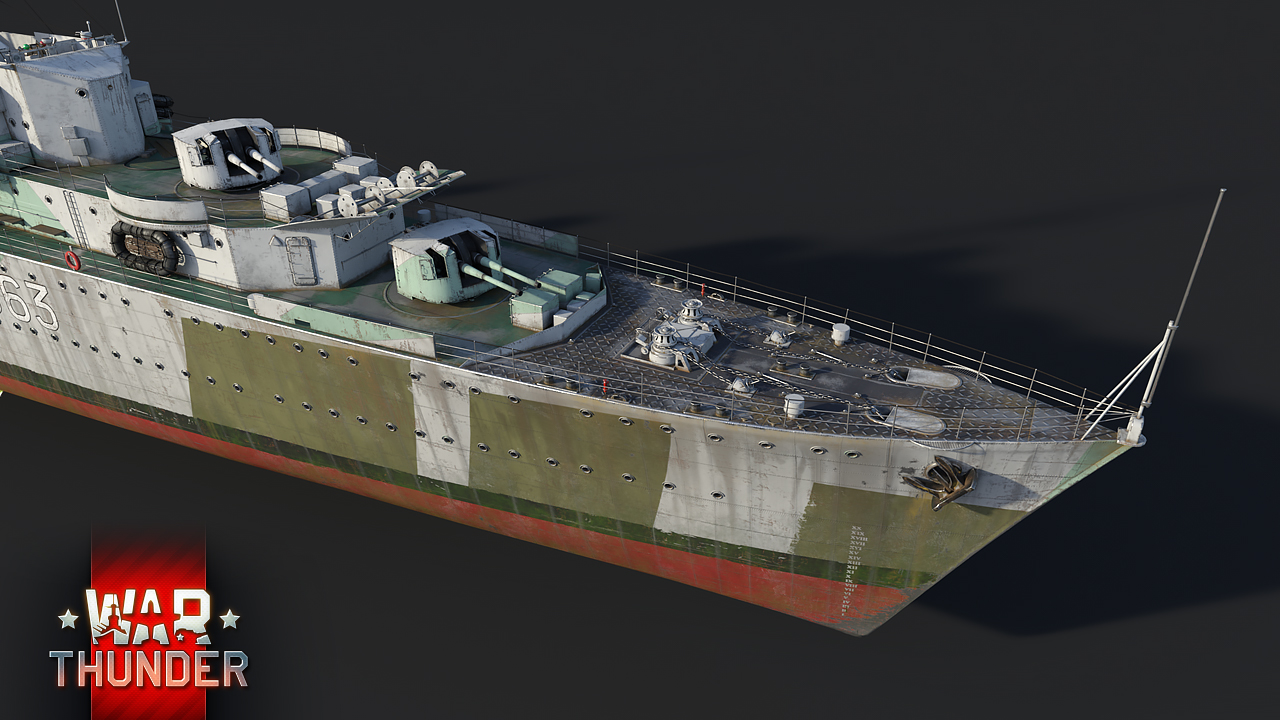 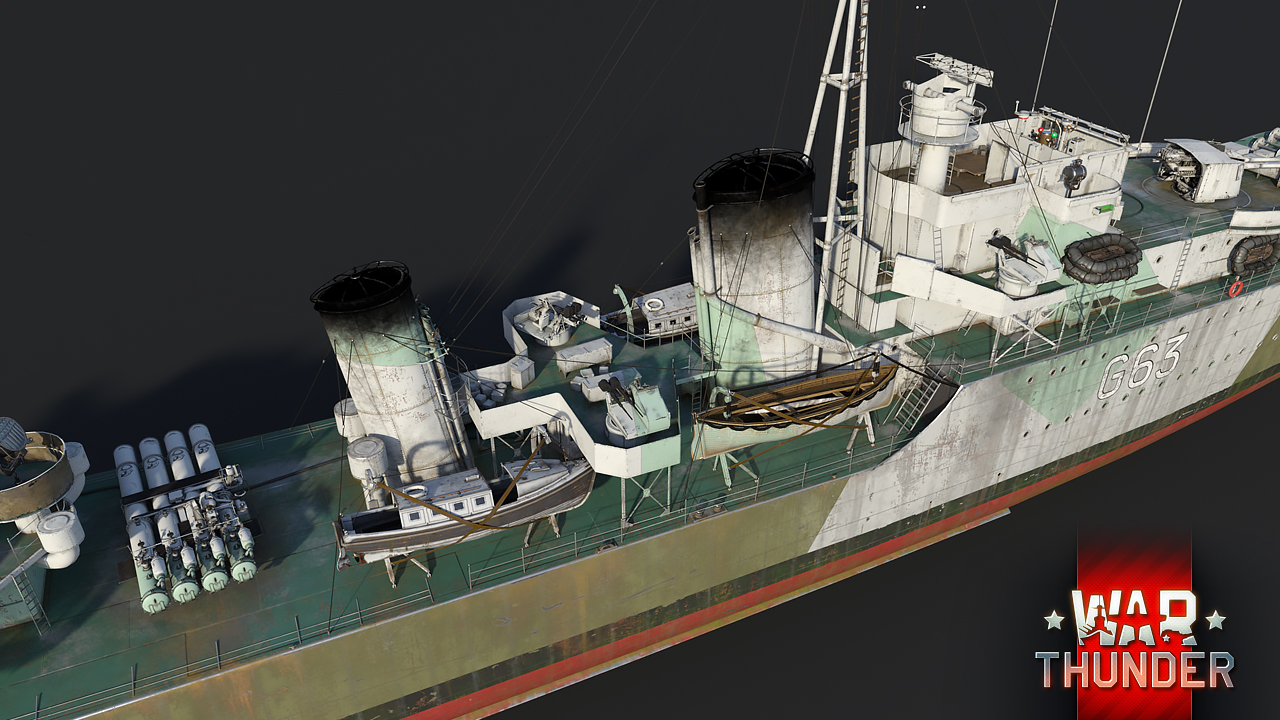 The HMCS Haida will be a premium destroyer of rank III in the Royal Navy tree, coming soon to the closed beta testing of Royal navy forces. Haida, similarly to premium destroyers from other nations, will be available for purchase in our online store as part of a bundle and will offer similar benefits to its perspective captains and will also grant access to Royal Navy CBT.

Compared to the standard Tribal-class destroyer, which captains already had the chance to try out in previous testing sessions of naval forces, Haida offers increased anti-aircraft capabilities, whilst other characteristics remain unchanged. 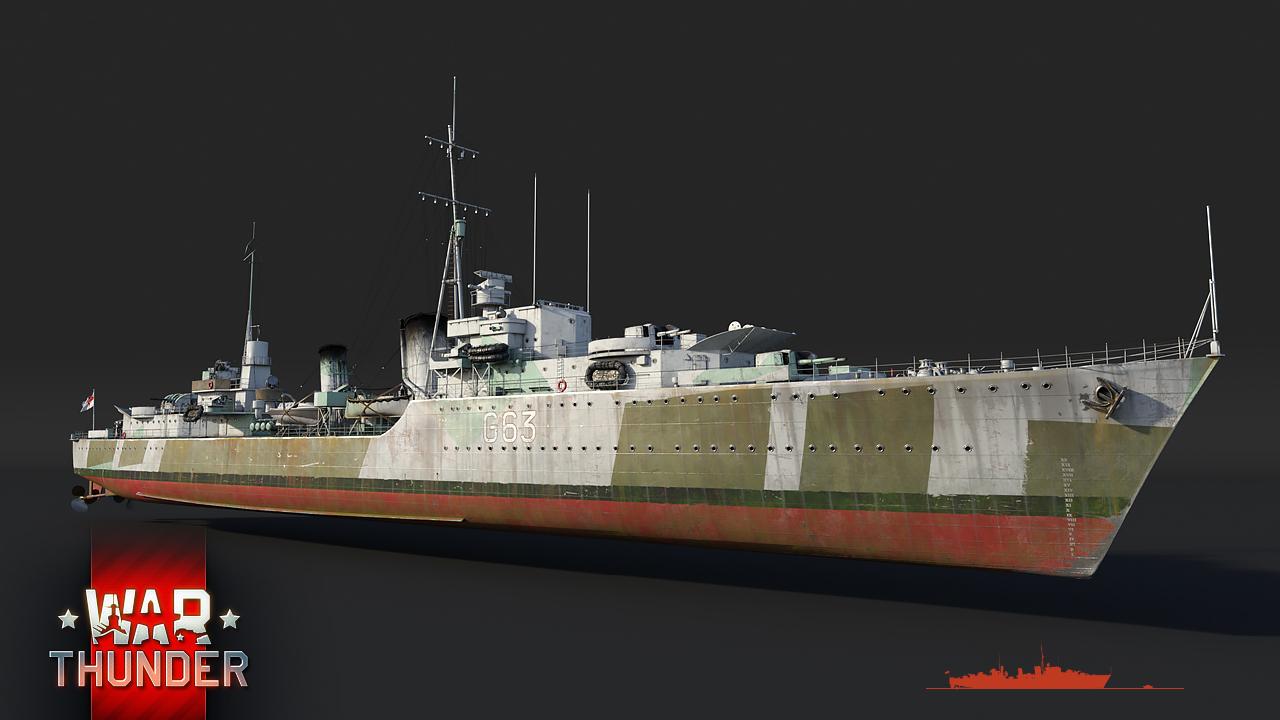 Fun Fact: During the Korean War, Haida earned herself membership in the revered “Trainbusters Club” after destroying the first of two North Korean trains in January 1953.

The anti-air upgrade removes the original loadout of two quad-barreled 12.7mm machine gun turrets and two single 20mm Oerlikon cannons and replaces them with a unified loadout of six dual 20mm cannon turrets. This upgrade allows aspiring captains of the Haida to more effectively deal with aerial threats as well as stealthy torpedo boats, without having to utilize the primary guns at close range.

HMCS Haida will spearhead the Royal Navy’s entry into War Thunder naval battles and is available in our online store as part of a special bundle which also provides access to the Royal Navy CBT. Haida may be anchored in the Canadian town of Hamilton, but she’s about to embark on new adventures in War Thunder! All hands, man your battlestations!