The T14 assault tank was the product of a collaboration between British and American engineers.

In the run-up to the Second World War, there was a general consensus that heavy infantry support tanks would soon be needed on the battlefields. Several powers had already launched production and deployment of heavy tanks, meanwhile British and American tank designers were just getting down to developing a specification for their concept. After a visit by the head of the US Army Ordnance Department to the UK, engineers from both countries began working on a joint project to design a heavy infantry tank. The British were already working on updating their own Churchill tank, while the Americans were putting the finishing touches on their M6 Heavy Tank. However it’s always good to have a backup, and two heads are better than one, right? Engineering resources were pooled and it was decided that T14 prototypes would be housed in the US. Work began in earnest.

In the meantime, the Second World War and recent operational experiences prompted the military to do a top-down review of their requirements for armored vehicles. When two prototypes were built and tested in 1943, it quickly became apparent that the tank design fell short of meeting the army’s needs. Both the British and the Americans succeeded in solving this problem by tweaking their own heavy tanks and were wholly satisfied with the results. The T14’s advantages weren’t enough to warrant interrupting production and modernization programs already underway. Military leaders refused to rethink the concept so close to their important clash with Hitler’s forces in Europe. 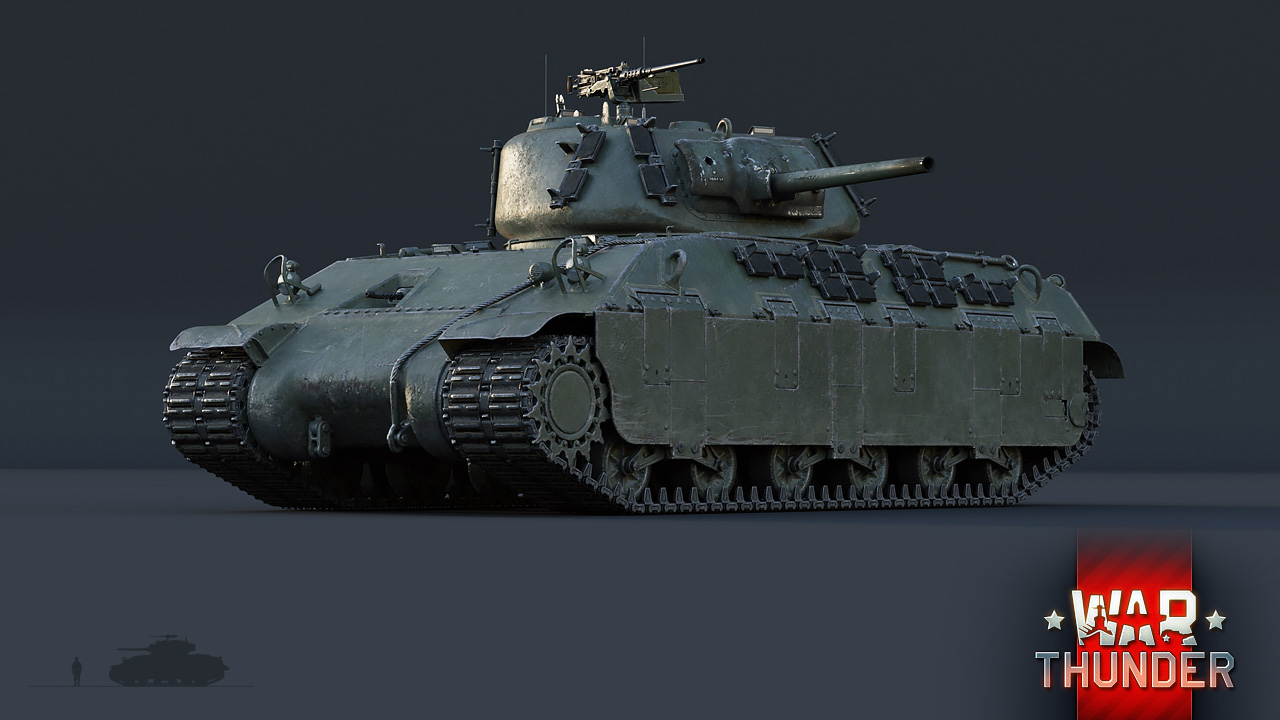 The T14 never saw any real action. But we’re about to see how it fares on the battlefields of War Thunder! The T14 closely resembles the Sherman – it has a cast turret and a sharply angled front armor plate, as well as the 75 mm M3 cannon favored by players. The powertrain is also similar – 500 hp. Despite being conceived as an assault tank, at the end of testing it turned out that the T14’s armor wouldn’t be sufficient to push it up into the heavy tank class. The hull armor is 50 mm thick all around and the front is composed of two armor plates angled at around 60 degrees. The transmission is protected by 101 mm of plating. The turret armor is comparable to the Sherman – 102 mm on the sides of the cast turret, making it hard to penetrate, while the typically rounded shape guarantees frequent ricochets. The T14 boasts 12.7 mm steel armored plates on the tracks, which handily protects them against shock waves from bombs and rocket shells, while HEAT shells that strike the plates will arm and detonate outside the tank.

The no-nonsense T14 will be a rank II premium vehicle in the US tech tree, joining the earlier Shermans in battle as an excellent addition to your deck in Arcade Battles, and a trump card against enemy air-dropped bombs in RB. Don’t miss the T14 in the next major update in War Thunder, a truly excellent tank!

Thats not t14 armata, i have been rused

Thanks for the ideas! (ﾉ◕ヮ◕)ﾉ

Thulle_, what happened to survivor award? got top kills in a couple games now since yesterday and not granting the 8k silver lion award? in stage 4 of challenge, 537/700 even if it's maxed 700 it should still give the silver award, and i'm pretty sure it's not counting either

Everything isn't premium though.

Look at ratio premium vehicle / regular vehicle, usually 3/4 of the vehicle released in a patch a not premium.

"The T14 never saw any real action. But we’re about to see how it fares on the battlefields of War Thunder! " - War Thunder, in a nutshell. Where US-American Focke Wulfs fight Japanese Focke Wulfs - over an island scenery where Russian Korea-Era PT-76 Light Tanks with HEAT-FS shells fight Japanese Tiger Tanks of 1942. And where the whole thing is labelled "Realistic Battles".

It refers to the Realistic physics and controls compared to Arcade. You want full realism, go Simulator. Stop complaining.

Dms110, You mean that simulator with UK+US+Bolsheviks vs. GE+JP ? As ground "simulation" battles. Probably trying to simulate flea market or something alike ? Or do you mean that part where La-5 (GER) and Yak-1 (GER) fight A6M (US) and FW190 (US) ? Or perhaps the glorious battle - KTs and Type74s against T-44-100 prototypes and Centurion Mk10s in the famous "Battle of North Ireland" (AKA Ash River) ? Admit it, Gaijies would not recognize history had it bitten their rear ends....

This is the thrid Premium Vehicle in the DevBlogs, i knew it will be like 1.59 a 75% Premium Patch.

HeinrichHoffman8, Sadly I believe the heavy T34 and T30 will never be added. If they are, I can highly assume it will push the T32 back to Rank 4. And the T34 will take it's place before the M103, and then the T30 will take it's place as top rank US Heavy tank. T30 would be a really good tank to have.

yeah but its not the final! there could be 3 more vehicles that ARENT premium. not to mention the majority of tanks ingame are not premium.

Today we will have more news of development?

One is not enough?!

Stona_WT, no! ve vant everything!! xaxa