News
back to news
Attention! This news was published on the old version of the website. There may be some problems with news display in specific browser versions.
Development
14 September 2016

It's difficult to imagine an aircraft of the Second World War that exceeds the size of the American B-29 Superfortress strategic bomber or the Japanese H6K Crocodile. But now we have a new record-breaker!

The German super-heavy BV 238 flying boat, made by the Blohm und Voss company, is one of the largest aircraft of the 20th century ever to be given shape in metal. Work on designing the giant began in 1940. Its engineers intended it to become a four-engine transport plane. However, Germany's tricky military situation forced changes in the project – the mighty 1,000 horse-power Jumo engines never reached the aircraft builders, who were ordered to repurpose the craft for military needs. The aircraft was put into testing in 1944, and its sheer size blotted out the sky – the six-engined giant was almost 13 meters tall, with a wingspan of 60 meters and a weight of 55 tons. This miracle of engineering was intended to serve the German military as a long-range sea scout, a transport or landing aircraft, a torpedo carrier and, of course, a bomber – the BV 238's weight when overloaded exceeds 94 tons!

This aerial giant's life turned out to be quite short. The only completed plane took several test flights without armament or a bomb complement, before going down to fire from American Mustangs while berthed at the Schaalsee lake in Germany in the spring of 1944. Two more completed prototypes were scrapped due to the project's cancellation – things were going very poorly for the German army and manufacturing industry at this point. So ended the story of the largest aircraft of the Axis powers in the Second World War, and the heaviest aircraft of its time... But today the BV 238 receives a new lease of life – in the War Thunder game universe!

We're pleased to present the first and only completed version of this child of Blohm und Voss, the BV 238 V1. We have recreated it in the game just as it would have been, had it ever been deployed, i.e. with defensive armament and several types of bomb load configurations. The aircraft's crew was planned at 10-12 people, most of which were gunners. The seaplane is equipped with four turrets carrying quadruple MG-131 13.2 mm caliber machine guns, and the upper hemisphere is protected by a turret with two MG 151/20 20mm caliber cannons – a total of 18 guns. It was intended that the aircraft would be capable of carrying a massive bomb load. However, for game balance purposes, the player will have several options for bomb loads of up to 5 tons. This means that the BV 238 will be a very effective bomber and will not encounter any opponents that are too strong for it in battle.

The BV 238 will be available to all players in the German aviation tech tree as a premium when War Thunder 1.63 is released. The gargantuan dimensions and low speed of this aircraft are compensated for by its reasonable defensive capabilities and large bomb load relative to its rank. It hardly needs to be mentioned that the BV 238 is a true jewel in the collection of any fan of 20th-century aircraft! 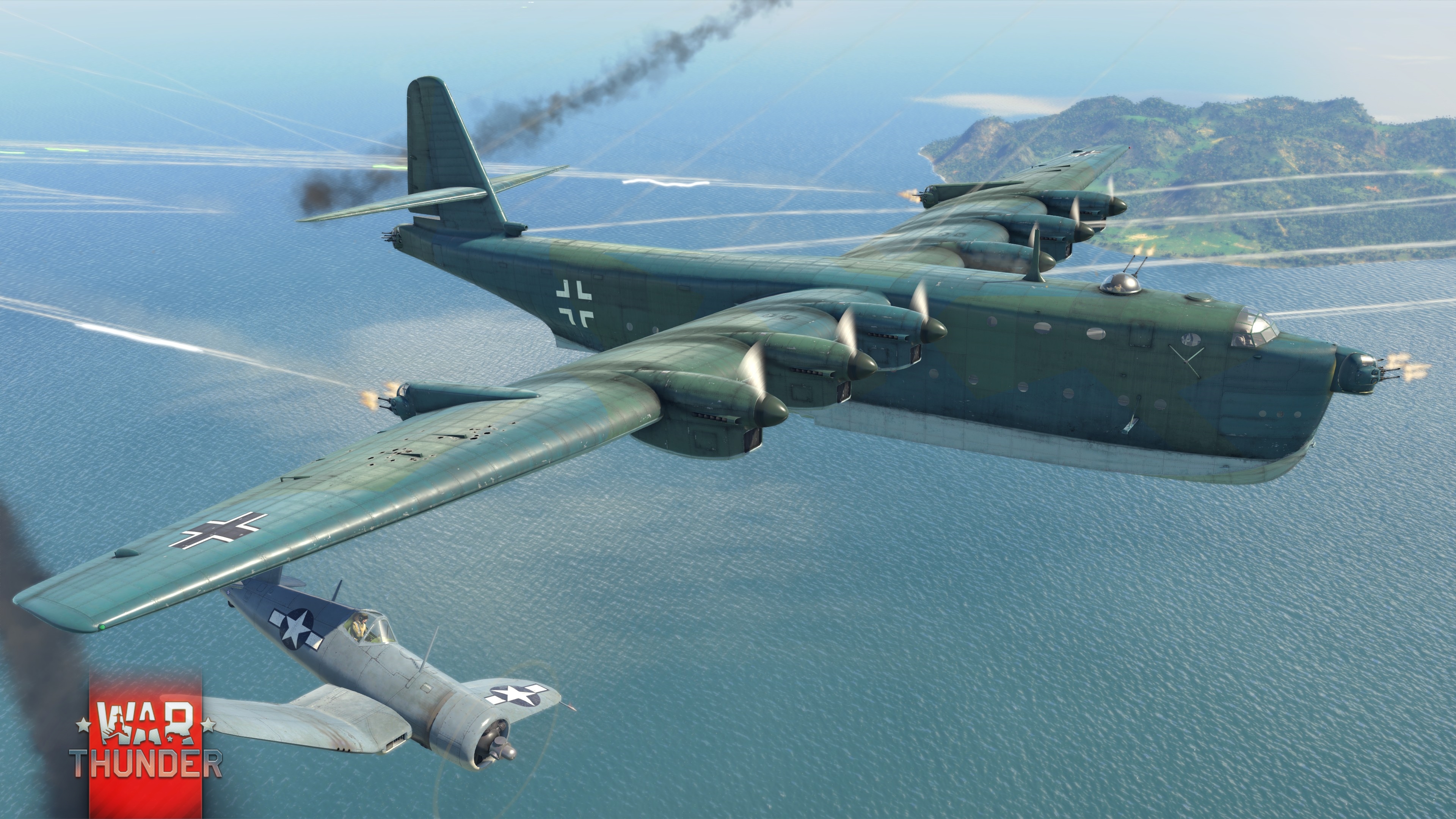 We're eagerly awaiting this wonderful aircraft along with you – see you in War Thunder 1.63!

Commenting is no longer available for this news
Rules
entity_XF
12

iis this gonna be an actual thing in warthunder? iv'e never seen a plane that big before

You should see this one then: https://en.wikipedia.org/wiki/Hughes_H-4_Hercules

2 devblogs in a day? Update must be very soon

not that soon.. still no sign of testserver opening

Sonder_9, it will open this week end

In this blog it's clearer than ever before: "We have recreated it in the game just as it would have been, had it ever been deployed, i.e. with defensive armament and several types of bomb load configurations." 90% of the comments: Best update ever! Nice! Great Job! If this thing was russian people would be rioting on the streets! Just goes to show that the community is the most biased thing in this game...

No...? Just because it's recreated historically accurate (except the load) doesn't mean it has to be unbalanced lol.

ArcBird, Finally something, that has a chance to stand against bias

I agree, I've rarely seen a more biased community. If it was Soviet/Russian there would be screaming and whining and crying about Russian Bias and attacking Gaijin, yet cause it's German everyone is having prematures over it.

jackTIGR, I've only heard people complaining about Russian Bias in Rank ll battles. You know why? CAUSE IT'S AN EXCUSE FOR NOOBS TO BE LAZY AND NOT ACTUALLY LOOK FOR WEAK POINTS!

will it be premium? any nes on armoured cars if there is something planed or not? the italian and german fiat g91 jet bomber from the 50s could be added no? thanks gaijin

Yes, it is a premium aircraft.

Stona_WT, How much will it be?

Uhxohr, I am atually happy for that... DID YOU SEE THE FREAKING ARMAMENT OF THAT THING! This thing in the normal tech tree would be more game breaking than the Tu-4! (Almost...)

Yes! Germany finally gets a nice heavy bomber, and it looks great to boot! *sees it's premium* He-177 Greif When????

I was thinking the EXACT same thing.