ZSU-23-4 Shilka: River of Fire
13 September 2016 Development
Attention! This news was published on the old version of the website. There may be some problems with news display in specific browser versions.

As the jet age of aviation arrived, it immediately became clear that previous anti-air guns were incapable of countering jet-powered aircraft. Various countries began to design self-propelled anti-air defense systems capable of detecting, firing on and destroying fast-moving targets at various heights. In War Thunder 1.63 Desert Hunters, we're introducing some of the most famous self-propelled anti-air guns of the post-war era. We've already told you about the American M163 Vulcan. Next in line is the legendary Soviet ZSU-23-4 Shilka anti-air gun!

Named after a river in the Far East, the Shilka was the first series-produced anti-air artillery system with liquid-cooled guns. Before the 1960s, all Russian anti-air systems had air-cooled guns, and this had a pronounced negative influence on their firing rate. Designed based on the ASU-85 already so familiar to our players, the Shilka had an armored turret housing four liquid-cooled 23 mm autocannons, allowing the vehicle to direct a true river of fire toward the enemy – up to 3,400 shots per minute!

Modern radar equipment allowed the Shilka to effectively engage air targets at heights between 100 and 1,500 meters, ranges of between 200 and 2,500 meters, and flying at speeds greater than 1600 km/h. The Shilka was produced in large batches from 1962, and numerous improvements and advances were made to its components and assemblies over time. Even now that more modern artillery systems have replaced the Shilka, the ZSU-23-4 remains in service in several countries (though primarily for destroying ground targets).

In War Thunder, the Shilka is designed to destroy high-ranked jet-powered aircraft – its high rate of fire, fast turret rotation and good vertical aiming angles allow it to take care of any air target at low altitudes with ease. At the same time, don't count on the ZSU-23-4 making a good anti-tank platform – of course, a volley of armor-piercing rounds into the side of a Leopard or other lightly armored vehicle is guaranteed to send its driver back to the hangar, but on the whole, the Shilka's armor-piercing shells are ineffective against ground targets. On top of that, the vehicle's armor is just 9-15 mm thick, meaning that it's best to steer well clear of the enemy tanks. 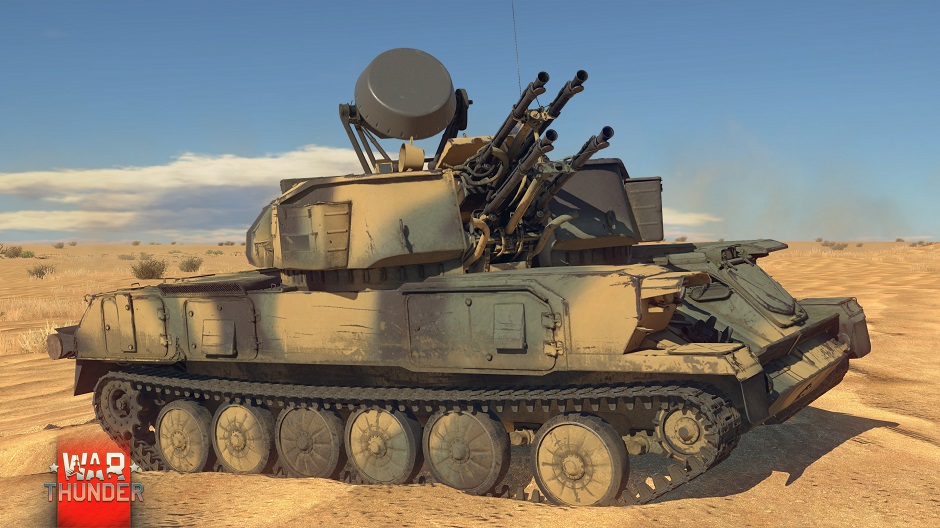 The ZSU-23-4 Shilka will make an excellent defender for its team against high-ranked air targets. Keep its strengths and weaknesses in mind to make the best use of it on the battlefield. See you in battle in War Thunder 1.63 Desert Hunters! Good hunting!

Commenting is no longer available for this news
Rules
IO0OI
12

Stona_WT, Thank you Stona_WT :D can you ask Gaijin if we, the average non elite players, may have any chance to purchase E 100 tank with real money for limited time (and quantity, let's say there is only one hundred available for sale so people must buy quickly before the stock is empty) please? Name the price and I will pay it :) because last year I and many players had really no luck from all those tournaments :( But if IS 7 may come to War Thunder than I would be ok without E 100 :P

Quite hyped for her, Now I look forward to gepard. GJ Dev Team

Follow our devblogs, we have few more things to show :)

Hopefully we'll get the Gepard as well in this release, it would be great :D

boombadaboom44, With the Vulcan and the Shilka...it's most likely going to be on this update :D

No video today? i want to listen to it fire

exactly! was excited to see the firerate, oh well. 1.63 isn't far off

If you believe in russian bias... I'd recommend you go to the doctor :P

Quetzalkoatl, As wise slav once said :"scream "c*ky bly*t rush B!" and then wait for your MVP to come"

OMG I KNEW I WAS GOING TO SEE ONE OF THESE... Dude the ZSU-57-2 is actually not great vs aircraft ZSU-23-4 will definetly be better, and this isn't russian bias because the US and Germany are literally getting vehicles just as good as ZSU-23-4, and If Gepard gets APDS-T it'll be way better than the ZSU and M163

Great! But if you fix M60's armor, this patch would be greatER!

_SpriteZero, doesn't m103 have the derpest tier 5 look and best gun sound in the game?