FV 438 Swingfire - Surprise Package
8 September 2016 Development
Attention! This news was published on the old version of the website. There may be some problems with news display in specific browser versions.

Anticipated by many, the FV 438 Swingfire is the first non-premium ATGM-equipped vehicle in the British lineup.
This fast, nimble - but hard-hitting - armoured vehicle will surely be favourite amongst the Queen’s loyal subjects.

Developed in the early 1960’s, “Swingfire” was a relatively slow missile that would allow directional changes of 45 degrees on the horizontal and 20 degrees of elevation which created the apt name. It was a 60 pound (27 kg), 3.5 ft (1 m) long rocket with range of 2.5 miles (4 km), capable of penetrating up to 500 mm of enemy armour. The FV 438 was a British light anti-tank vehicle, equipped with the wired-guided “Swingfire” missile. The 438’s primary weapon was launched through two Swingfire ATGM launchers, or bins, which could be reloaded from inside the vehicle. Apart from the 2 missiles stored in launchers, it could carry up to 12 additional reloads. Its only secondary armament was a 7.62 mm M1919 General Purpose Machine-Gun.

FV 438 Swingfire was based on the FV432 armoured personnel carrier, a vehicle that was very lightly armoured - it was meant to deliver its crew to combat, while keeping it protected from machine-gun fire. This platform was used for several other modifications amongst which is its sister vehicle already in game - the Falcon. FV 438 “Swingfire” was powered by a Rolls-Royce K60 multifuel engine with maximum of 240 horsepower. It was a quick and nimble vehicle with weight slightly exceeding 16 tons, which could reach up to 32 mph (52 km/h).

Although the Swingfire missile was used during various engagements on other platforms, the 438 carrier was never used in combat and was decommissioned in the 90’s. The vehicle was built in rather smaller numbers.

In the game, FV 438 “Swingfire” will be located as the first ATGM-equipped vehicle on Tier 5 within the British lineup to cope with other countries already armed by similar vehicles. While playing this vehicle, tankers should have on mind it’s very lightly armoured - the least of all ATGM carriers. It can be penetrated by any machine-gun fire from certain distances.

Its playstyle will be similar to Raketenjagdpanzer 2, but should be treated even more gently. Hit & run tactics is where the vehicle will excell most. Hide, locate the enemy, hit him with your powerful missile and relocate, while avoid being hit - or even better, spotted. If the situation is looking very bad - and you are flanked by lightly-armoured enemy vehicle or attacked from above, you can return fire from the top-mounted M1919 Machine-gun, but don’t rely on it - there are few vehicles in the game that can be dealt with by similar armament. 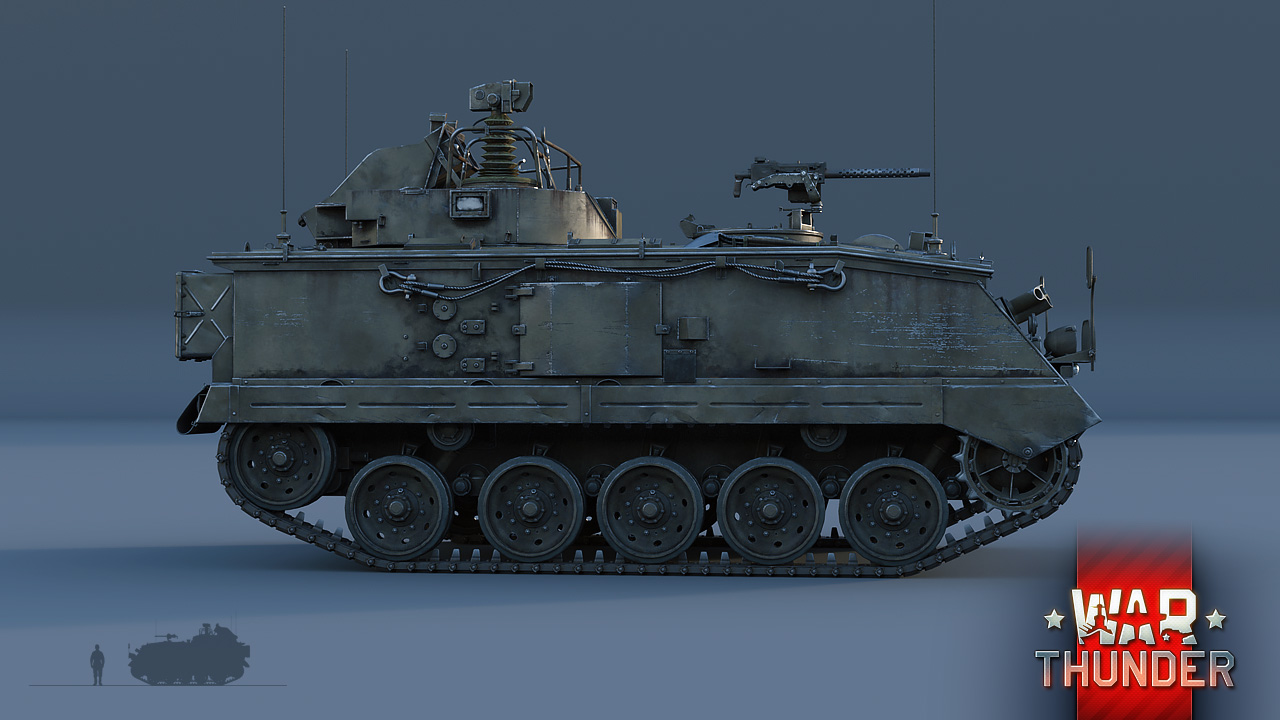 Luckily - the thin armour of your vehicle can be used to your advantage with its low weight. Relocate often, keep the distance between you and your enemy and be aware of your surroundings. Light armour and a vehicle packed with 14 high-calibre explosive missiles do not go well together when used in the first line. The FV 438 will be an excellent support vehicle. Apart from the obvious armour drawbacks, the vehicle dispenses powerful guided armament that perfectly hides the weaknesses of the carrier. We believe that this vehicle will surely find its fans amongst dedicated players that favour the taste of British vehicles.

What a wonderful thing to see another vehicle I used to work on in reality in our game, superb.

Can you confirm that the Bovington Camo (with a lof of red) was used by the british forces?

CmdNomad, I have no idea what that cammo is, i never saw it in reality, always the olive drab/dark green for me 8)

Instead of adding more ATGMs, you should have removed the existing ones. They've completely ruined tier 5 tank battles. COMPLETELY

Look, I'm Always complaining at gaijin for decisions they make, but this time you are just taking it too far. ATGMs can be defeated and defeat you just like any other tank, and a competent driver with heat fs ammo is much more dangerous than an atgm tank driver.

Im_A_Lemon, Yeah, like the unkillable IT-1. You can't ammo rack it, the fuel tank in the front eats all your HEAT and Sabot shells and it's still able to fire atgms while more than half of the components are damaged and the tank is on fire. You know there's something seriously wrong with your game when you have more ATGM missiles flying around than actual tank shells. Long range maps are a complete nightmare for tanks aswell. You cant peek out or drive across a field without having people snipe you across m

Most feedback and responses from the addition of ATGM vehicles has been positive actually. Most seem to grasp the core concept of ATGM gameplay, how they work, how they fight and how to best them in combat. All of them have strengths and weaknesses that can be exploited and none of the are able to rule the battlefield by themselves. ATGMs are very easily countered, especially to most tier V machines. The addition of the Swingfire only further balances tier V as not all Ground Forces nations have reseachable ATGM capable machines.

Smin1080p, That is right my friend am not really bothering about ATGMs. Yes sometimes did not blow up by an ammo hit or keep firing rocket with serous damages. Much worst for me is rising the IT1 to highest level of gods by tuning its rockets capabilities with unreal numbers. https://en.wikipedia.org/wiki/IT-1 as its says it should never be able to deal with any of the heavily armored T5s. 250mm Ar pen on RHA armor what was commonly used on WW2 tanks. so in game this should be the worst of all ATG.

The Su-6 thread filled with vitriol, Russian Bias accusations and other rage and stupidity over a Soviet vehicle added, but here no-one has any bad thing to say. Even though it's an ATGM to put others to shame, 500mm pen, 8kg of explosive, non-racking ammoracks, etc... Surprise, surprise. Will probably have lower BR than IT-1 and even with all IT-1's problems that enrage so many, there won't be (so many?) rant threads on forums. Welcome to (anti-)Russian Bias!

Except for the fact that it has LESS armor than the Rktjpzer or the Sheridan......

Snake509, since when does armor matter in tier V?

I am complaining, but you have to agree that an op ATGM + lots of armor + the rocket being 50 cm ABOVE the TURRET is vastly superior to something that has no armor, is bigger, has no turret and the rocket isn't suspended above the tank.

Rubentje7777, honestly, the ATGM might as well be suspended above the tank. you see how they go up before coming down? you can fire over ridgelines better than IT-1 if i predict.

would you have it any other way? 8)

Scarper, Actually, yes, I would. I would like it if Gaijin finally made USSR competitive again in end-game WITHOUT ATGM, with good main battle tanks. And with FV438 kind of vehicles and weapons being introduced, the excuses not to introduce the Soviet MAIN battle tank of that time (T-64) are getting thinner and thinner.When will USSR get any good MBT's?When Germany gets Leopard 2, UK Chally 2 and US the Abrams? The Objekt 430 would fit perfectly into this game as it currently is without breaking anything

" capable of penetrating up to 500 mm of enemy armour."

Jonatax2, Doesn't really matter, not until they introduce the composite armor

Okay only reliable info I can find on this is a manufacturing document where the manufacturer quotes a pen value of 127 mm at 40 degrees impact angle(4000 m) and a assessment value using technical rubbish (formulas) of 945 mm at 90 deg impact angle (same document).....so, 500 seems reasonable as a ball park figure. If you can find something within a tome and not a game fansite or general summary figure please forward it to us. I worked on this thing and even we didn't know its damage capabilities 8) reliable source for 500mm is Waffen-Arsenal Sonderheft - Raketen der NATO

Scarper, A document that I found (https://www.forecastinternational.com/archive/disp_old_pdf.cfm?ARC_ID=1102) from the Forecast International Inc. online archive report the same data you provvided above. I quote: Armor Penetration (40°)(a) - 12.7 cm at 4Km (a)This is the figure quoted by the manufacturer; the application of our standardized formula for HEAT warheads yields a figure of [email protected]°. I don't think that [email protected]° is a reasonable approssimation almost the 50% of difference. [email protected]° is ok.