The American T55E1 wheeled tank destroyer was created on the chassis of an experimental all-terrain 8x8 vehicle. The Cook Brothers company received an order for the development of the project in August 1942, and in the fall, the first prototype, named the T55, was ready at the Allied Machinery Manufacturing facility. After the first tests, the military suggested that the designers modify the vehicle, since some issues appeared during the tests. So, at the beginning of 1943, the T55E1 appeared - a more densely assembled and improved version of a promising self-propelled gun.

The T55E1 role in combat was assumed as fire support of advancing infantry, while being able to operate on any type of surface. The T55E1 had no turret, and the massive 76mm M7 gun was located on the front of the vehicle. This arrangement required the shifting of the power plant of two 110-horsepower engines to the vehicle’s rear. At the same time, the SPG received a low profile, sufficient traverse angles and excellent elevation angles. The upgraded T55E1, due to improved driving characteristics and a decrease in total weight, showed a speed of just over 50 mph (80 kph) in tests and good results in overcoming obstacles. At the same time in 1943, a special commission recommended that the army completely abandon the use of armored wheeled vehicles in favor of tracked platforms, and the Cook Brothers project was closed. But we are sure that this curious tank destroyer will definitely find a place in War Thunder! 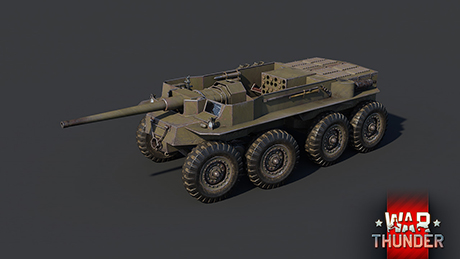 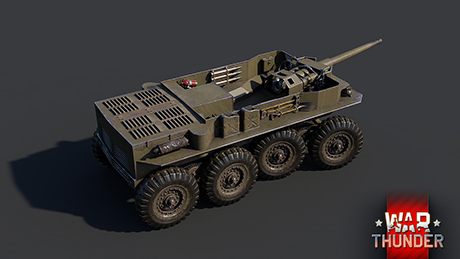 In our game, the experimental T55E1 wheeled tank destroyer will be a reward for completing tasks in the new season of the Battle Pass. Its unusual layout, low profile, good speed and excellent elevation angles make it an excellent ambush warrior. The vehicle easily finds cover, can work from the slopes of hills, and accelerates well on solid surfaces. The 76 mm M7 cannon, familiar to you from the M10 SPG and the M6A1 heavy tank, copes well with all targets at lower ranks, sometimes, however, having some problems with medium rank heavy tanks. Among the disadvantages of the T55E1 are the lack of armor and the small crew.

The 8x8 wheel chassis contributes to good turning circles in the vehicle, which is very important for an SPG without a turret. On the other hand, these turns will have to be practiced, since the wheelbase of the T55E1 is very long. And of course, do not forget that on shaky soils and in mud, wheels are less effective than tracks, so choose the off-road route wisely.

The T55E1 will be a good addition to the setup of US armored vehicles of low and medium ranks for all combat modes. Complete tasks in the War Thunder Battle Pass and unlock unique combat vehicles! More news from the Battle Pass coming soon!

Gentlemen! From this day forward, you will all refer to me by the name... Anteater!

they did it, the mad men did a dev blog on the weekend

You see, I play this game called Destiny 2 so I hate the word anteater. Love you Stona!

_Pixy, IB4 this thing will be your nemesis in War Thunder and you will start to cry every time you hear it. Which is proper, because you should fear the name of... The Anteater!

Love this toy gaijin,but i still have to say no more BB for naval please u are breaking this mode

ChikaKKSK, Stop complaining here and do it on the forums, they don't a sexy job on the Details on SMS KAISER, sure BB kinda break the game but let me put it like this, this is a realistic game, BB can take and take punishment, so don't complain and accept what this game will become, some day we will see IOWA class and Bismark, and more modern destroyers etc....

Your car has a gun on it?

Looks more like a space rover than an armoured fighting vehicle.

it's confirmed that this thing will be 4.7?

Because the pakpuma is rare? And this wont be? Think a little...

Flexelsson, Ah yes, because we should balance vehicles off of their rarity rather than their performance.

Not under-tiered enough to be the Pakwagen. It's similar to the Pakwagen but for some reason this is at 4.7 whereas the Pakwagen is at 3.0..... Makes sense....

Oscar_Muffin, Better gun and shells than the pakwagen probably. May have better performance and not hull break as easily.... Who knows, we haven't used it yet.

PakPuma: Finally a worthy opponent! Our battle will be legendary!