The Buccaneer was a British naval jet strike aircraft, developed by the Blackburn company in the late 1950’s as a replacement for the Supermarine Scimitar. Soon,  pilots in War Thunder will have the chance to take control of a variant of the well-known Buccaneer as it arrives in player hangars with the release of the next major update!

In the early days of the Cold War, the Soviet construction program of the new Sverdlov-class cruisers caused the British military a great deal of concern. Believing the Sverdlovs would pose a similar threat as the German ‘pocket battleships’ in the previous war, the Admiralty decided to counter this issue not by building new ships of their own, but developing a new strike aircraft instead.

After issuing a set of requirements for a new jet-powered attack aircraft with nuclear strike capabilities, the Admiralty chose Blackburn’s design as the winner of the competition in 1955. A few years later, in 1958, the first prototype of the Blackburn Buccaneer undertook its maiden flight.

The first production version of the Buccaneer, the S.1, entered service with the FAA in the early 1960’s. However, the Buccaneer’s early service career was plagued with issues relating to its underpowered and unreliable turbojet engines. Therefore, Blackburn almost immediately began working on an improved variant by the time the problems became apparent. Outfitting the aircraft with much more powerful and economical turbofan engines, Blackburn introduced the Buccaneer S.2 in the mid ‘60’s, with the first aircraft joining the ranks of the FAA in March 1965.

However, after the British fleet carriers began being decommissioned in the late 1970’s as part of a foreign policy agenda change, the Buccaneer S.2’s were also being phased out of active service along with them. The roughly 80 produced Buccaneer S.2’s largely participated in exercises and training missions under FAA service, but saw more extensive use with the RAF, after being retired by the Navy. 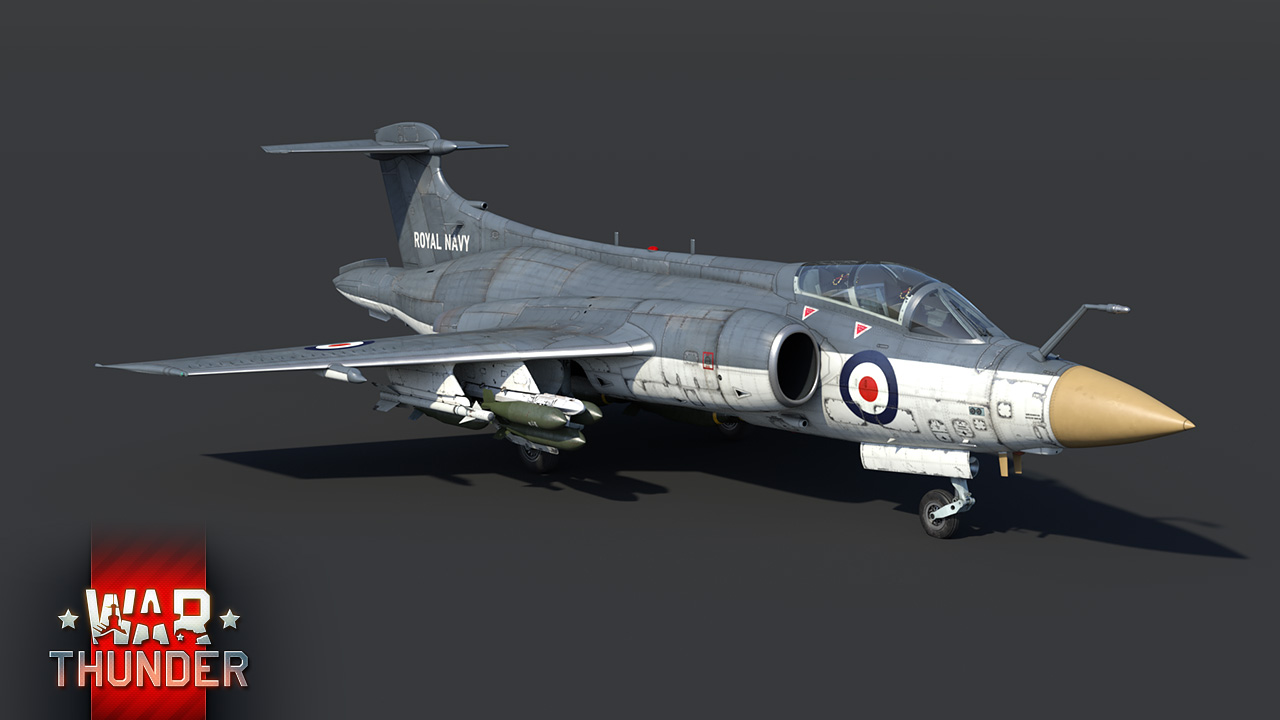 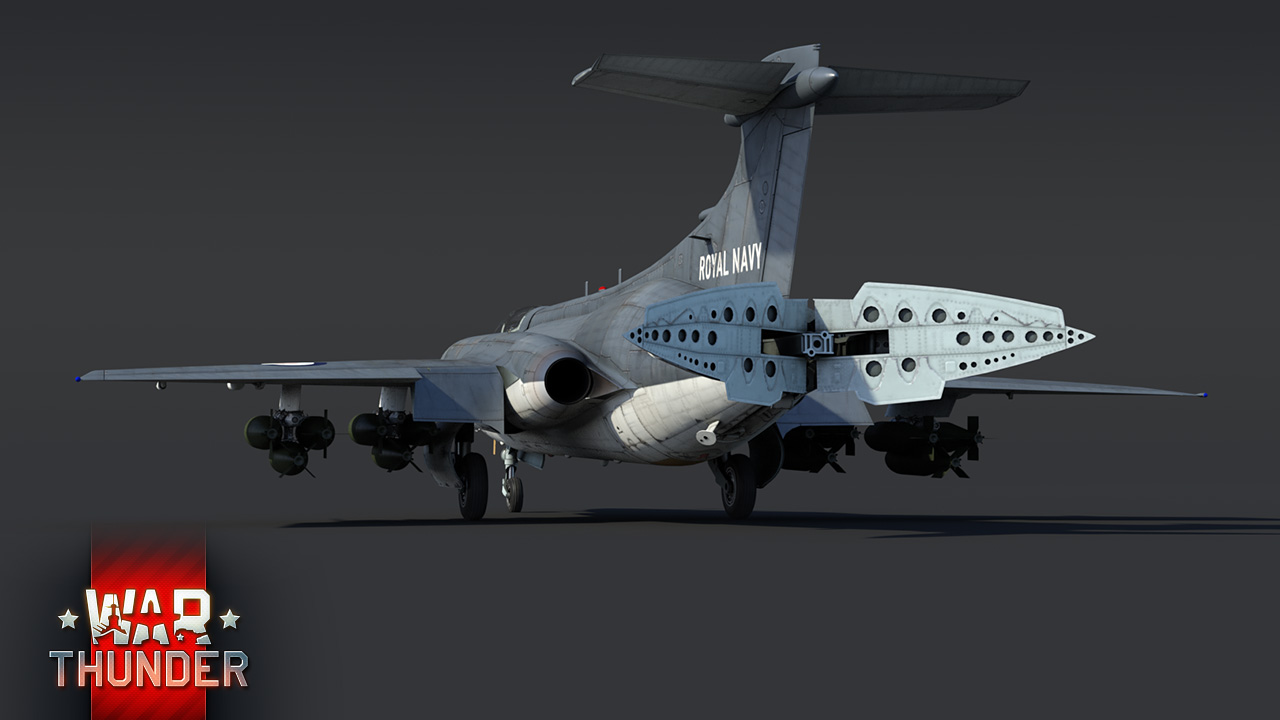 In War Thunder, the Buccaneer S.2 is set to arrive in player hangars as part of the next major update and expands the roster of famous British military jet aircraft in our game by another entry. Apart from being a worthy addition to any British pilot’s collection, the Buccaneer has a lot more to offer than pleasing aesthetics as we intend to show you in today’s devblog; so strap yourselves in!

One of the most characteristic features of the Buccaneer are its two large air intakes leading into the equally sizable engine nacelles at the wing roots. The latter house a pair of powerful Rolls-Royce Spey Mk.101 turbofan engines, capable of generating an impressive 11,255 lbf (49 kN) of thrust. As a result, the Buccaneer S.2 can reach a top speed of 580 knots (1,074 km/h) at sea level. While this rightfully may seem like a rather modest top speed when compared to some of the jets added to the game in recent updates, it’s worth noting that the purpose of the Buccaneer’s engines are not to achieve record-breaking speeds, but to allow the aircraft to carry an impressive payload!

Fun Fact: During the early days of the Buccaneer’s development, the project was dubbed BNA and BANA for secrecy, later leading to the aircraft being jokingly nicknamed ‘Banana Jet’.

Speaking of the Buccaneer S.2’s payload, the aircraft possesses provisions to take up to 12,000 lbs worth of ordnance into battle via its internal bomb bay and underwing hardpoints. Pilots can subsequently choose how to allot the available payload by equipping the aircraft with a wide selection of unguided bombs, rockets as well as missiles in order to successfully perform any strike task at hand. For air combat, the Buccaneer S.2 also carries a pair of early Sidewinder missiles as well as RWR and mounted flare pods to counter incoming IR-guided weapons. However, the Buccaneer S.2 doesn’t possess any conventional gun armament, making the aircraft entirely reliant on its suspended weaponry.

The long-awaited Blackburn Buccaneer S.2 is finally arriving to War Thunder as part of the next major update and will further expand the British high-tier strike aircraft roster. In the meantime, be sure to stay tuned to the news as we continue revealing what the last update of the year will bring to War Thunder. Until then, clear skies pilots!

Commenting is no longer available for this news
Rules
_KYRENE_
28

Cyberpunk feels scarier than ever for Gaijin.

Lol. I am already planning to buy Cyberpunk game next week. Still I would play War Thunder.

It is just like every other games with only singleplayer mode. Hype won't last too long.

I_NAMELESS_I, No it isn't, lmao. You clearly haven't played it.

This is only Dev blog number 4. There are more things to come. For many people this is a long awaited aircaft that we already gave a big hint was coming last update.

Smin1080p, If this patch is smaller than the previous one, in which italy received 2 veichles, I suppose our TT will receive 1/2 veichle in this one. Im just saying that this attitude is unrespectful for the other part of the community(maybe less important to your eyes) that doesn't play at all major coutries, but only minors.

Get in the forums with your long list of early Italian CAS jet and IFV suggestions.

OvaItine_Jenkins, Blackburn Buccaneer S.2 i another fat wale , rising in SL fast to 16k . To fat for G-RB .

Oh great, now the only thing in my imagination is this plane barreling at me in slow motion. but it has cat ears. and is a hefty chonker. Oh lawd.

Yarr, Sponge boy me bob I have acquired the location of enemy Gepard and now he's about to eat 12,000lb worth of ordnance. Argargargarg.

Damn, imagine flying this thing, bombing some bad folks and listen to this song. **dreaming**

An War Thunder Ad played before the song. XD

2 10.7 attackers, now the AJ 37 Viggen will fit perfectly this update

The Buccaneer is definitely not going to be 10.7...

It won't be 10.7 if it's only rank V lmao It looks like it will either be before the Scimitar or after the Canberras

SilverFortyTwo, before the scimitar would make sense considering its a naval aircraft and more closely resembles it, but I got the two canberras so it want it to go after those :P