The A-7D is the USAF version of the A-7 Corsair II naval strike aircraft, developed in the mid 1960s by Ling-Temco-Vought as a replacement for the Douglas A-4 Skyhawk. Soon, pilots will have the chance to take control of the successor to the popular Skyhawk as it arrives in War Thunder with the release of the next major update!

Briefly: The USAF version of the A-7 naval strike fighter, featuring a more powerful engine and an M61 Vulcan cannon while retaining access to a large arsenal of secondary weapons.

In the early 1960s, the US Navy sought to procure a new naval strike aircraft in order to replace the A-4 Skyhawk. However, to ensure a fast development and reduce costs, the new machine was supposed to be based on aircraft already in service with the USN at the time. One of the aircraft manufacturers taking part in the competition - Ling-Temco-Vought (LTV) - quickly developed an aircraft on the basis of their F-8 Crusader by shrinking the dimensions of the new aircraft and taking away its supersonic abilities in an effort to further save on costs.

The decision to do this was met with success as LTV’s design was quickly declared the winner of the competition and given the official designation A-7 and named ‘Corsair II’, signaling the lineage from the older WWII-era fighter bomber F4U Corsair (also built by Vought). The aircraft undertook its maiden flight in September 1965, with serial production starting in 1966. In the first production batch, close to 200 A-7A Corsair IIs were built with many seeing action in the ongoing Vietnam War.

Driven by the need to acquire a new strike aircraft themselves, and encouraged by the successes achieved by the A-7 in Vietnam, the USAF ordered the development of a separate Army variant in 1968, which would become the A-7D. Apart from vastly improved avionics, the A-7D also featured a more powerful engine and an M61 Vulcan cannon instead of two single-barreled 20 mm cannons.

The A-7D entered production in 1968 and continued rolling off the assembly line until 1975 with over 450 units being produced. It served until the early 1990s before being retired from active service. 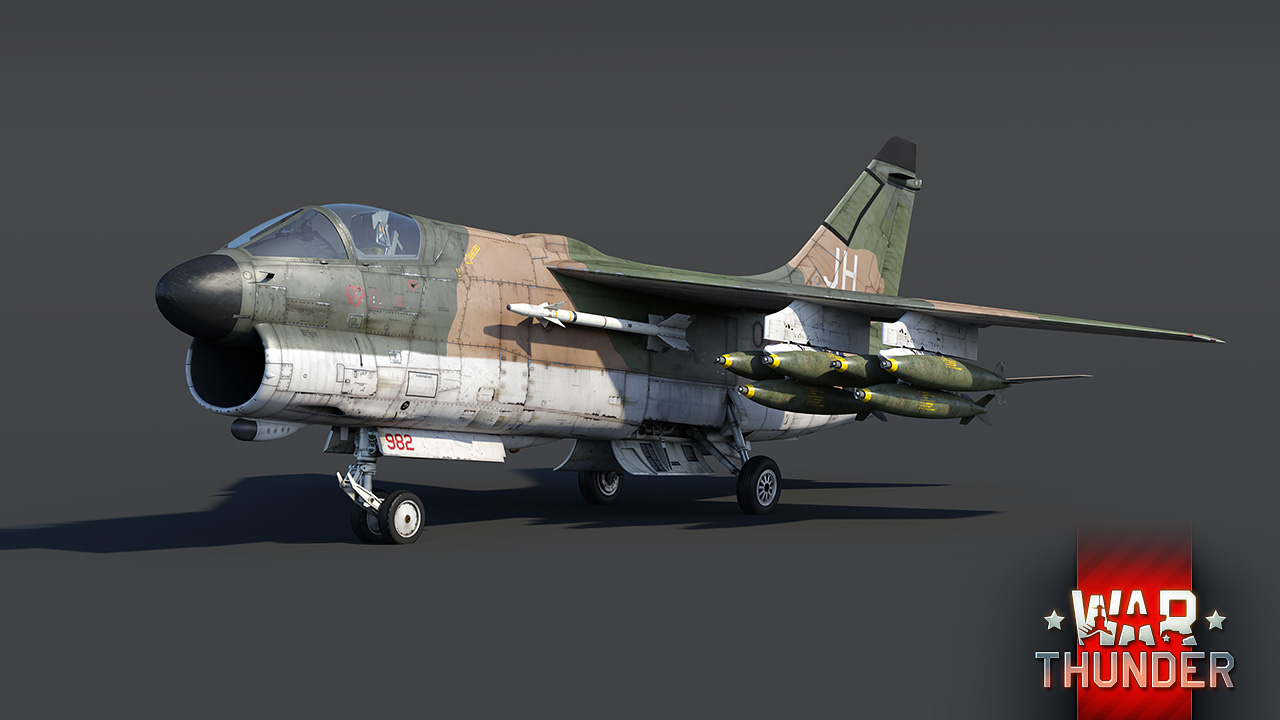 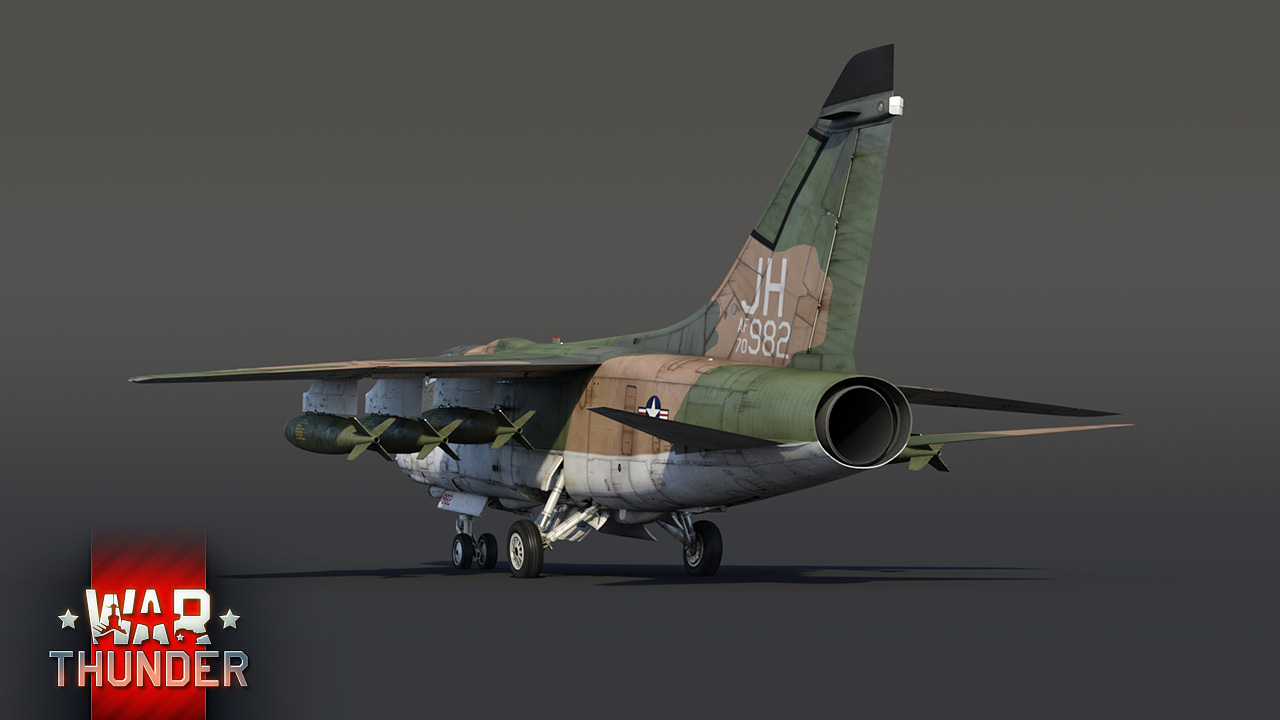 In War Thunder, the A-7D Corsair II will be a new jet attacker joining the top rank of the American aviation tree with the release of the next major update, coming to the game in the near future. Building upon the base principles of the A-4 Skyhawk which precedes it, the A-7D Corsair II features improved flight characteristics, but above all, notably improves the aircraft’s firepower through an increased payload.

The A-7D is powered by a single Allison TF41-A-1 turbofan engine, generating a maximum thrust of 14,250 lbf (6,464 kgf). This in turn allows the Corsair II to reach a top speed of 663 mph (1,067 km/h) at low altitudes and up to 700 mph (1,127 km/h) at higher altitudes. Unlike most other aircraft at the top rank, the A-7D doesn’t feature an afterburner. Nonetheless, it’s engine is still powerful enough to get the Corsair into the action quickly, although pilots should also be aware that simply outrunning potential pursuers may not be an option at all times. Therefore, keeping relatively close proximity to allied pilots is a recommended tactic when piloting the A-7D.

Fun Fact: The A-7 Corsair II featured some of the most modern avionics available at the time, going as far as being one of the first US aircraft to be equipped with a head-up display.

Unlike the early variants of the A-7, which share the same primary weapon loadout as the A-4 Skyhawk, the A-7D sports the well-known M61A1 Vulcan cannon instead of a pair of two single-barreled 20 mm Colt cannons. Renowned for its extremely high rate of fire, it only takes one well placed burst of this deadly 20 mm cannon to bring even the most advanced jet fighter out of the air in the blink of an eye. For the same reason, however, despite having more ammo at its disposal than the A-4, the A-7D can just as easily run dry if pilots don’t exercise some trigger discipline.

Pilots who appreciate the A-4 Skyhawk for its impressive payload carrying capabilities are sure to find a new favorite with the A-7D Corsair II. Being able to carry up to 15,000 lbs (6,800 kg) of ordnance, consisting of combinations of air-to-air missiles, rockets, bombs and gunpods.

The A-7D Corsair II will soon become available to all pilots as the new top ranking jet attacker in the American aviation tree, following the release of the next major update coming to War Thunder. In the meantime, be sure to stay tuned to the news to avoid missing out on any of the latest developments surrounding the upcoming update. Until then, clear skies pilots!

Commenting is no longer available for this news
Rules
TheAceOfAces
39

You literally just added the A4E, to compliment the already existing 14-15 viable CAS options the US has at top tier, Why add even more when so many countries are desperate for things.

US has a plethora of jets to be added that far exceed any other nation. In Rank VI alone they have lots of examples. This does not stop us adding more for other nations. But historically, its to be expected since the USA has so many jets.

Smin1080p, yes sure, but you guys forget the balancing factor

It's almost like the US was one of the largest powers of designing and producing aircraft, along with Russia. Nobody is gonna use more than 2-3 of them in their lineup and it's uncommon to use more than 1 at a BR where radar AA exists.

TacticalOkuu, Definetly wrong. i use every single vehicle in the US tech tree and i really want more.. there is not only ground RB to use planes

thank god another CAS for USA, exactly what this game needed

I feel like these updates are coming out a little fast for the games own good. There are still many bugs left over from the last update (I still crash every 30 minutes). And while I love american CAS to death, there is such a thing as too much. :(

Crashing could be you, my game almost never crashes

Yeah, that sounds like a you issue more than specifically the game. It's been pretty stable for me over the years. In fact it's been getting better.

Jack_Forge, i feel u but i feel OodlesofOwOdles more, there are many teething issues last update and i feel too, that everything is rushed because not everybody likes to have a clusterfuck of rough underdeveloped work made to look cool and end up like new power.

So are we getting Stug IV, this patch ??

What are Gaijin employees smoking when they add A-7 BEFORE F-8. A-7 is literally based on the F-8 and first flew 10 years later

Stona, is France getting one too?