HMS Invincible was the lead ship of her class of three battlecruisers built for the Royal Navy in the late 1900’s and represents the first battlecruiser-type warship ever to be built. Soon, captains will have the chance to take command of HMS Invincible as she becomes one of the first warships of her type to arrive in War Thunder as part of the next major update!

HMS Invincible was laid down in April 1906 as the lead ship of her class of three new armoured cruisers, intended to replace the preceding Minotaur-class. The ship was launched a year later and completed in March 1909, subsequently being commissioned into service with the Royal Navy. Thereafter, HMS Invincible took part in fleet maneuvers and several reviews before being sent to drydock for refit. In 1911, the warship was officially redesignated into a battlecruiser, thus becoming the first ship of this kind.

In 1913, HMS Invincible was ordered to the dockyard once more to replace her electrically powered turret traverse mechanisms with hydraulic ones in order to fix ongoing problems and make the ship battle-worthy. However, while works were still being undertaken, the declaration of war on Germany in August 1914 signaled the start of WWI and HMS Invincible was quickly recommissioned.

Already at the outbreak of the conflict, HMS Invincible saw herself in the thick of the action, engaging German ships at the Battle of Heligoland Bight in late August 1914. Later that year, in December, HMS Invincible, along with her sister ship HMS Inflexible, took part in the Battle of the Falkland Islands, sinking the two German armoured cruisers, Gneisenau and Scharnhorst, during the engagement.

HMS Invincible also took part in what would become her last engagement - the well-known Battle of Jutland in May 1916. During the battle, HMS Invincible was struck by fire coming from the German battlecruisers Lützow and Derfflinger, detonating her midships magazine and causing the warship to break in half. 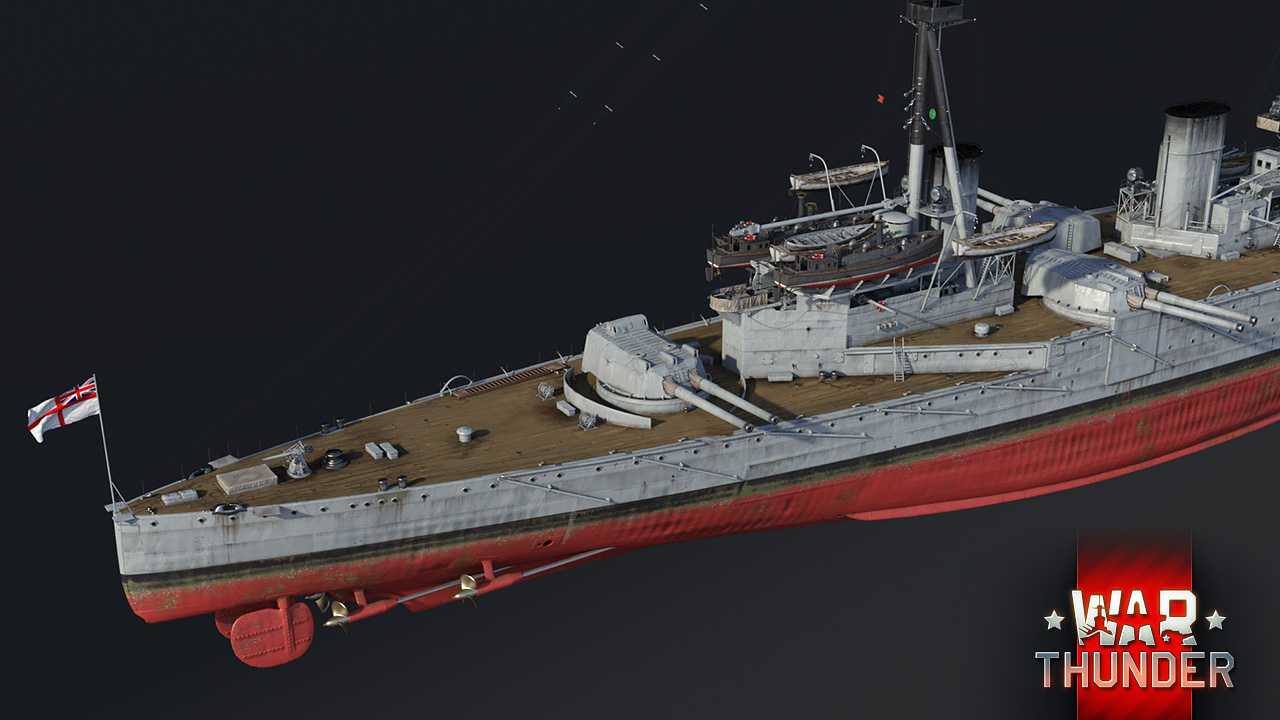 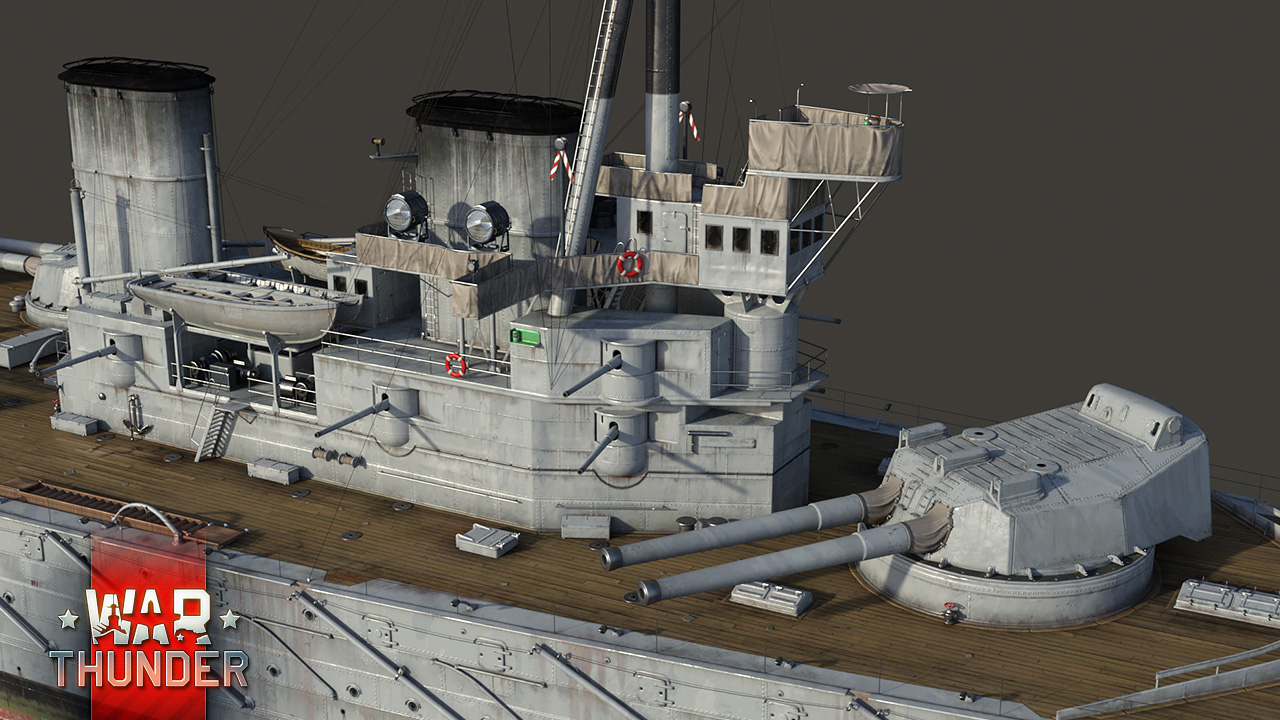 In War Thunder, HMS Invincible will be among the first battlecruisers to become available to British captains in the ranks of the Royal Navy, following the release of the upcoming major update. Unlike full-scale battleships, HMS Invincible represents a ‘middle of the road’ warship design, combining aspects from both cruisers and battleships.

The battleship part of HMS Invincible should become immediately apparent when taking a look at the ship - it’s firepower of course! Being fitted with four twin 12’’ (305 mm) cannons comprising its primary armament, HMS Invincible rocks greater raw firepower than any cruiser, but is about on par with most other battleships of the time. Therefore, HMS Invincible should have no issues taking on even the most heavily armoured behemoth on the high seas thanks to its large guns.

Fun Fact: HMS Invincible is the first warship to be designated a ‘battlecruiser’, thus creating a whole new class of warships.

The first vessels of the battlecruiser class are lighter versions of battleships, featuring speed which is comparable to the cruiser class. Reductions in weight results in the reduction of armour thickness. Sporting a 152 mm armored belt to protect its vital components, while 178 mm of armour encases its turrets, HMS Invincible may effectively counter almost all ship classes, except battleships.

Furthermore, having virtually no anti-air armament on board makes HMS Invincible a rather inviting target for pilots and daring torpedo boat captains alike. Therefore, captains of this particular warship are best advised to stay close to friendly vessels and support them in their advance, while guaranteeing mutual support during the battle.

HMS Invincible is expected to dock in player ports with the arrival of the next major War Thunder update and will become available to all captains for research. In the meantime, be sure to stay tuned to the news to remain in loop on all the latest developments surrounding the next major update coming to the game very soon. Until then, calm seas captains!

Commenting is no longer available for this news
Rules
Flipped_StuG
54

How about you stop adding capital ships that aren't suited for the current maps/modes, and give us a higher top BR and maps/modes designed for them instead?

This could literally all be fix if naval EC was added back. They took it down for improvements but I don't understand why they don't just leave it up. Easily the best mode for naval and could work with really large ships. Especially since you can't spawn in them right away,

MisterBlueHat, Naval Needs EC on a much much more frequent basis.

The only big ship currently needed is Dante.

Dozer15, the only chonky thing we need is type 10

Giddy for when Giulio Cesare finally shows up too.

Nice to see more big ships coming! Will Italy get their battleships by the way?

can we see something other than ships plz

So you want another high tier tank that everybody complains about on 200+ pages? WT is not only tanks, there are naval players too.

can we see something other than ships plz²

_TheRedBaron__, Nice to see the elitist tank and plane players are still REEEing like they always have been. Kek. xD

Instead of feeding naval with more ships that feel out of place, how about actually fixing naval for real? Every patch just feels like it gets worse. Mountains of feedback has been provided over the years, all of it completely ignored

We need much, much more EC

REALLY another naval devblog??? Come on

Some of us actually play and enjoy naval. Some of us like that they're adding new naval things. Go pound sand.

[email protected], I know kind sir! Im just excited for the new patch, do you think we will get 2 today?