News
back to news
Development
25 February 2020

The Douglas A-4 Skyhawk is an American jet attack fighter, developed in the mid 1950s as a contemporary replacement to the outdated AD Skyraider. Coming to War Thunder as part of the upcoming update 1.97, the A-4 Skyhawk will soon become available to all pilots and fans of American jet aircraft!

Briefly: The jet-powered successor to the AD Skyraider, following in the footsteps of its piston-engined predecessor by being able to carry highly impressive payload options.

Development of the A-4 Skyhawk began in the early 1950s, after the U.S. Navy issued a set of specifications for a potential successor to the AD Skyraider. Douglas, being the manufacturer of the proven Skyraider, received the order to come up with a new jet-powered replacement, also capable of carrying nuclear ordnance.

Taking up the task, Douglas developed the requested replacement within 2 years of the order coming in, and by doing so, developed an aircraft that was well under the allocated budget for the project and went well above the minimum requirements set out by specifications. The first prototype of the Skyhawk took to the skies in June 1954.

Highly impressed by the aircraft’s capabilities, relative simplicity and cost-effectiveness, the U.S. Navy officials didn’t wait long to sign the first production orders. As a result, the first A-4 Skyhawk production models rolled off the assembly lines in 1956 and entered official service with the U.S. Navy and USMC.

Already by the time the first production units were being completed, Douglas finished work on an improved variant of the Skyhawk - the A-4B. Among other changes and improvements, the B model of the Skyhawk allowed the aircraft to carry more sophisticated weapon systems, such as the AIM-9B Sidewinder AAMs as well as the AGM-12 Bullpup missiles.

In total, close to 3,000 A-4 Skyhawks were produced, participating in numerous conflicts, such as the Lebanese Crisis of 1958, the Vietnam War during the 1960s as well as in the Falklands War in 1982 under Argentine colors. The Skyhawks served for nearly five decades before being retired from U.S. service in the late 1990s and early 2000s, although the A-4 is still in limited use, being used as a mock aircraft, mimicking the MiG-17, for example. 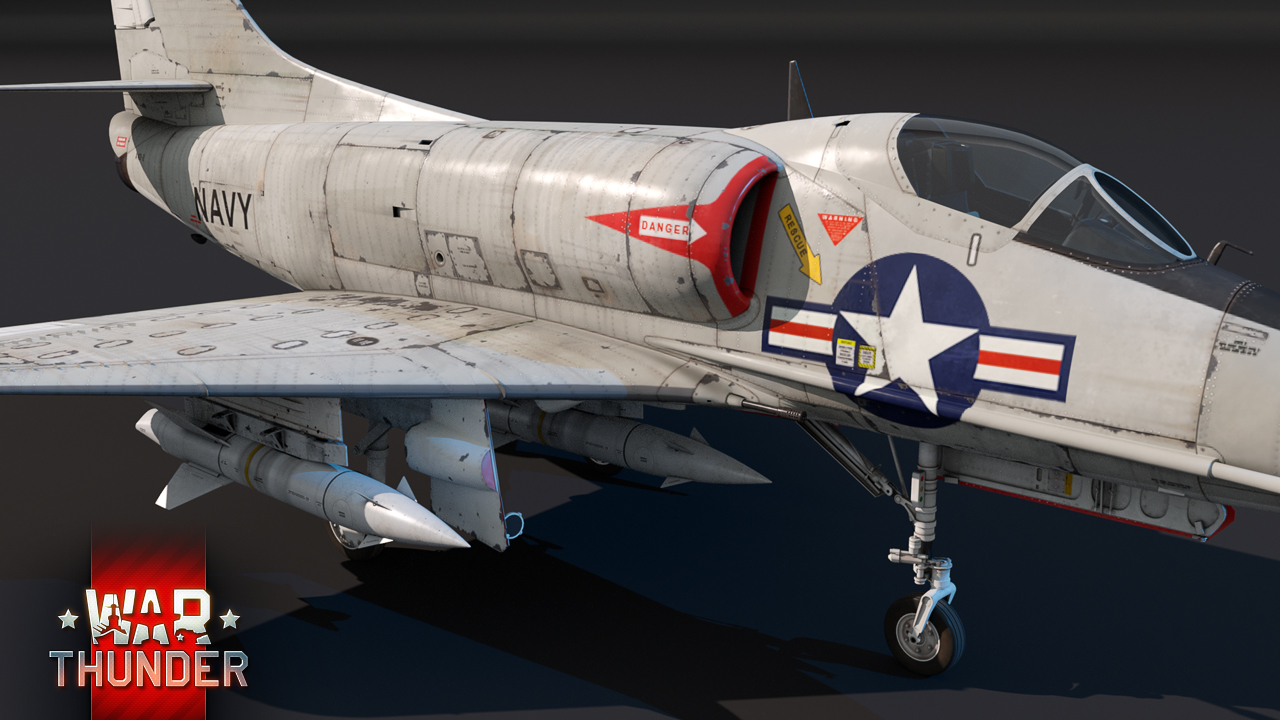 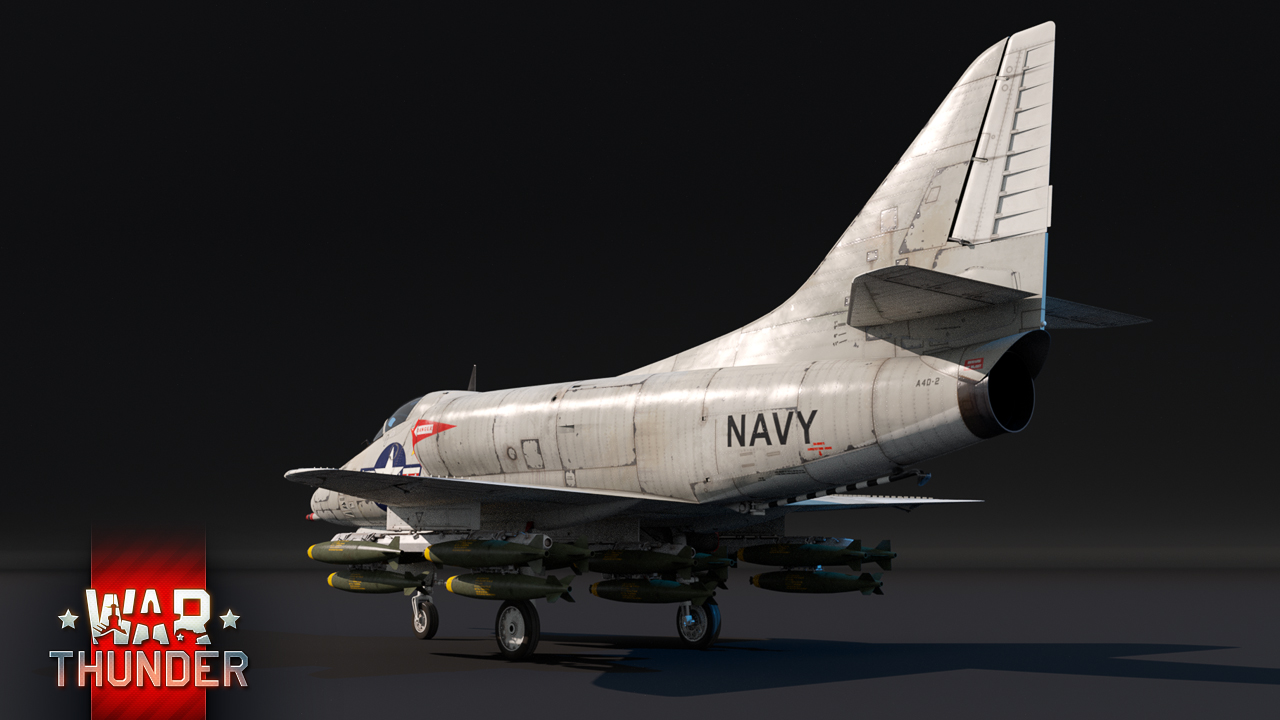 In War Thunder, the A-4B Skyhawk is a new addition inbound to Rank VI of the American aviation tree and is scheduled to arrive to the game with the release of update 1.97. Quick, nimble and light, yet capable of carrying a vast selection of secondary ordnance options, the A-4B Skyhawk is destined to soon become a favorite among both dogfighting aces as well as fans of ground attacking and close air support!

The heart and soul of the A-4B Skyhawk is its Wright J65-W-16A turbojet engine, producing 34.2 kN of thrust. In effect, this allows the machine to reach a top speed of 656 mph (1,056 km/h) at sea level. This, coupled with the Skyhawk’s good acceleration and overall maneuverability make it a suitable fighter for the intense aerial dogfights found at high rank battles - a role in which the Skyhawk successfully proved itself during its early service life.

Fun Fact: During the Vietnam War, an A-4 Skyhawk shot down a North Vietnamese MiG-17 using a Zuni unguided rocket, marking the Skyhawks only air-to-air victory of the conflict.

The A-4B’s primary armament consists of two 20mm Colt Mk.12 cannons, situated in the aircraft’s wing roots. However, while the 20mm cannons will undoubtedly make short work of almost any opponent pilots may encounter in the air, their relatively low ammo capacity of just 100 rounds per barrel will demand a respectable amount of trigger discipline and accuracy from their operators!

Fortunately, the same doesn’t necessarily need to be said about the Skyhawk’s plethora of secondary ordnance options. These range from unguided rockets, such as the Mighty Mouse or Zunis, over guided missiles such as the familiar Bullpups and Sidewinder air-to-air missile to standard unguided bombs of calibers going up to 2,000lbs as well as additional 20mm gunpods. The Skyhawk is able to take up to three gunpods, the rate of fire of each gunpod is 4200 rounds per minute! In other words, no matter what the target of the day is, the Skyhawk offers a wide spectrum of potential options on how to deal with it - the pilot simply needs to pick his fancy!

The A-4B Skyhawk is coming to War Thunder at Rank VI of the American aviation tree, following the release of the upcoming update 1.97. In the meantime, make sure to stay tuned to the news for all the latest information regarding the next major update coming to the game very soon. Until then, clear skies pilots!

Commenting is no longer available for this news
Rules
WT_CT_Center
48

inb4 someone complains its not the jet they wanted or for the nation they wanted.

Smin1080p, Was about time :D probably one of the most anticipated jets for me, are later versions with the "hump" on the back planned for WT? I love how those look

It'S nOt A tAnK sO iT dOeSn'T cOuNt

i love how this plane looks <3

That's a pretty one for sure!

Ouiche, Why has the KV-1B had its lion gains reduced to 140% and the KV-1E has increased its gains to 280%? both are heavy tanks BR 4.0 with exactly the same armor and the same ammunition, why only the German model was reduced the lion gains ???

I completely agree! Such a beautiful aircraft. I cant wait to see it in game. Thank you Gaijin.

With such possible payloads, maybe it's about time for a loadout system overall ?

Ok, I WANTED THIS. I know some other here don't, but I really do. Next one on my list is the F104 Starfighter.

It's not about that others don't want this it's about priorities . Saying that it's about time Gaijin starts to take care of other nations such as Soviets who pioneered air to ground missiles and who criminally lack modern CAS before adding more CAS to the nation that already has BY FAR the most CAS in the game doesn't mean that we are against this plane , it simply mean that we care about BALANCE something Gaijin ( and visibly some players ) clearly don't give a flying SH about !!!

Raldi92, But my friend, i will forgive your stupidness. You clearly don't understand how the concept of 'balance' works. No, the russians dont need more CAS, what they need is a complete new weapon system that will be added to the game with no counterpart so that nation will be extremely overpowered. (btw for people who dont know what sarcasm is, this is sarcasm, just making sure you know :)

I'm hoping for the F-8 Crusader

TheAirplaneGuru, The F8 would fulfill my wet dream

now we just need the F-5E and... *vietnam flashbacks*

And with Paint it black playing in the backgorund

Jollyroger95, Paint it, Black, my friend.

To bad the US never used F-5's and the E was introduced in 1972 during Deescalation.

RedLinesBurn, "In October 1965, the USAF began a five-month combat evaluation of the F-5A titled Skoshi Tiger. A total of 12 aircraft were delivered for trials to the 4503rd Tactical Fighter Squadron", " Over the next six months, they performed combat duty in Vietnam, flying more than 2,600 sorties" - small numbers, but they did according to Wikipedia

Not before Su-7, I sure hope! Su-7B was the Soviet attack aircraft that was the contemporary to the Skyhawk both in time and role.

probably in a minimum of 4 patches, Soviets still only have 1950s groundpound planes

VeldigTroli, I mean the IL-28 was used in the 70's and 80's aswell but compared to what america has I almost start to think that gaijin forgot Russian CAS :/