D-Day was a stunning allied landing operation. This day was the beginning of a full-fledged offensive in North-Western France, and subsequently - the defeat of the Germans in the Ardennes and the invasion of western Germany. The opening of the Second Front brought victory for the entire Allied coalition in Europe closer.

The Allied landings in Normandy on June the 6th, 1944, have become the greatest landing operation in history, and the beginning of the long-anticipated land operation for the Allies in Europe. ‘D-Day’ was the first stage of operation ‘Overlord’, developed to liberate the North-West part of France, and to maintain further advances towards the western borders of Germany. The landing operation began at night, when thousands of paratroopers floated to the ground in Normandy close to the enemy defenses. A sea landing along a lengthy 80 kilometers of shore became the most dramatic part of the operation. Sector ‘Omaha beach’ was the most difficult part of the shore to conquer, with well-organized German defenses on the high rocks and wide fire-swept beach. An impending sea storm made this landing even harder, slowing down transport vessels, preventing effective ship naval bombardment and stifling air support. At great human cost, the allied forces stormed the beach strongholds, securing the landing area for tanks and engineering companies.

In honor of the 75th anniversary of the Allied landings in Normandy we would like to begin a special event. Participate in historical battles and anniversary tournaments from the “D-Day” series, get authentic camouflages and vehicle decals. Don’t miss out on the benefits of bundles in our shop.

The final price of the bundle will depend on whether you already have any of the packs or not. Be sure to login to the store to see your individual price!

Note! You can also get a unique title and the decal, if you log in to the game from the 6th to the 10th of June and gain at least one victory, whilst at the same time you previously purchased all separate packs which are included in the bundle above (M4A3E2 Sherman purchased in the game using Golden Eagles). The title and the decal will be assigned after the 11th of June to all users who have fulfilled these conditions.

Note! The offer is valid for PC, Mac and Linux users only. 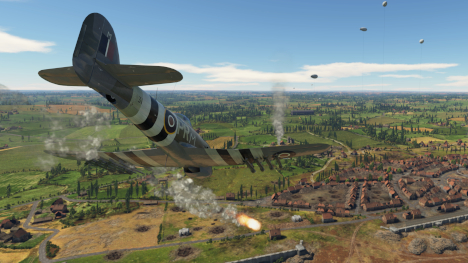 Set of the memorable decals

Complete the tasks and get memorable decals of vehicles participating in the Battle of Normandy.

By playing in US/British vehicles

By playing in German vehicles

Register now and take a part in the “D-DAY” tournaments, dedicated to the 75th anniversary of the Allied Normandy landings and win valuable prizes.

How to participate in tournaments on TSS:▼

Remember the day that changed history...

Commenting is no longer available for this news
Rules
Dms110
39

In memoriam. May the brave souls that sacrificed all rest in peace forever.

This was such a unique moment in history. Let's hope we'll never have to live that again!

So it's just 2 camo needing to be first 8 times and 6 times.? And some decals ? Thanks but i'll pass on this one, not worth it in my opinion.

There are also decals, a special historical event (a frequent suggestion) for Ground and Air, Tournaments, Bundles and also a bonus awesome wallpaper :)

Smin1080p, I think its great that the rewards are not vehicles and are purchaseable for those who dont have the time to play so much. Perfectly done! I really hope that the rewards of the WW Mode will go in the same direction and leave vehicles to "manageable" Events for everyone.

This is a moment that'll never fade...even with the WW2 veterans themselves fading away. To the men of the 3rd Canadian Infantry Division, who died hitting Juno Beach 75 years ago today: "Your exploits in 'this great & noble undertaking' shall never be forgotten. You've all earned your place in our hearts...& in the history books. Godspeed to all!"

And no wonder both skins have wrong marking placement...

If you believe they are incorrect, please submit a bug report with evidence so it can be corrected if so.

Smin1080p, Or he can just do nothing whilst we all laugh at gaijin's constant incompetence. Take your pick or fix it yourself.

"first place in the team" Oh, come on— Please

sirmortimer, They reduced SP gain in the event and made it so ground vehicles don't cost SP. They've now admitted they know that the ground/plane point distribution is broken.

That's the easiest part why is everyone complaining about getting 1st place?

Awesome - I can purchase the decals AND the camouflages, this will be a good event to just have some fun without worrying about time and other responsibilities! Thanks ^_^