News
back to news
Attention! This news was published on the old version of the website. There may be some problems with news display in specific browser versions.
Fleet
10 October 2016

The history of naval battles - Part 1 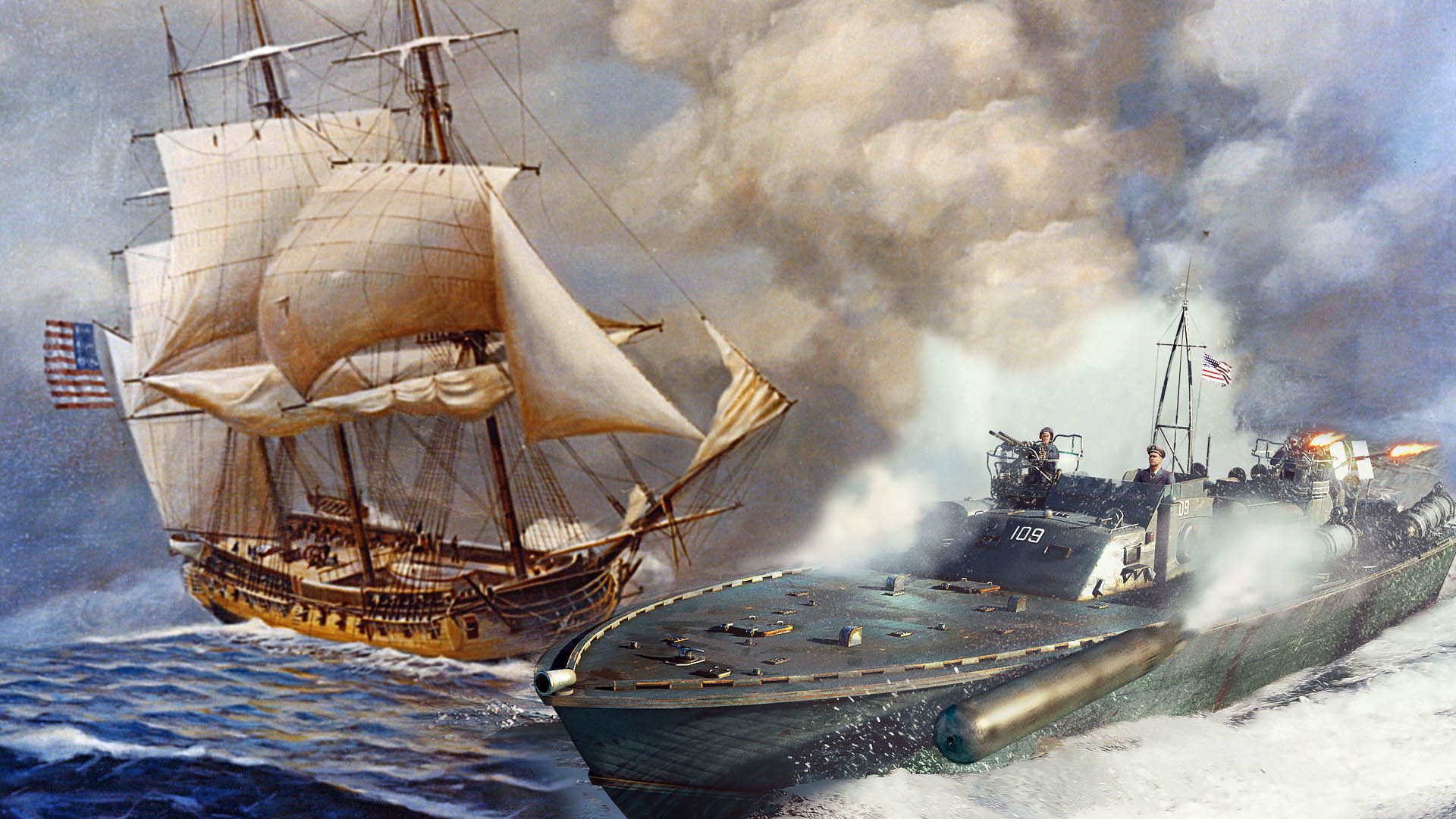 With the news of our Naval Forces being brought to War Thunder, we thought our players might like a little background info on how naval warfare began. Whilst many will draw a logical link between the first warships to the battleships of the early twentieth century, there are many more factors involved in naval warfare than simply being the largest ship with the greatest offensive capability. The vessels of War Thunder share many qualities, characteristics and vulnerabilities with the first warships and the fighting ships of the Golden Age of Sail. Responsive handling, close range combat and performance at the mercy of the elements forge a real link between the sailors of the world’s first navies, and their counterparts on the boats and small ships of the War Thunder era...

For as long as mankind has existed, man’s nature has led to armed conflict. And as long as man has taken craft to water, seabourne conflict in one form or another has not been far behind. Naval warfare has developed independently in civilizations across history, with the Mediterranean Sea largely acknowledged as the location of the first sea battles. In 1210 BC a sea battle between the fleet of King Suppiluliuma II and a Cypriot fleet is often cited as the first recorded naval battle in history. The first engagements at sea came well before the first purpose built warships - whether a vessel was used for trade, transport, piracy or patrolling, early ships in the Mediterranean were normally powered by both oars and sails, and featured an open deck layout. As actions between vessels became more common, rams were built into the prow of some vessels and purpose built fighting ships were becoming far more commonplace by the 8th Century BC. However, navigating such a vessel under oar power with enough speed and precision to impact an enemy vessel required a great degree of skill. Far more common were boarding actions, attacking ships with archers and, as vessels became more stable, attacking with catapults.

During the time of the Ancient Greek Empire one of the world’s first decisive naval battles was fought at Salamis in 480 BC. An alliance of Greek City States put a combined fleet of just under 400 warships to sea to face a colossal Persian fleet of between 600 and 1200 vessels, depending on which source is to be considered the most accurate. In the ensuing battle, the outnumbered Greeks proved their superior seamanship by capturing or destroying upward of 200 enemy vessels. The era of improvising war at sea was over; fighting sailors who combined excellence at arms with professional ship handling were now coming to the fore.

By the time of the Battle of Salamis, the war fleets of the Mediterranean were largely made up of Triremes - a type of vessel whose name was derived from having three rows of oars on each side, each manned by a single sailor. From what historical evidence has been discovered, it is assumed that Triremes were generally just under 40(131ft) metres long, with a shallow draught of just 1 (3.2ft) metre. Just as the Trireme was itself a development of earlier, smaller ships it would be augmented and later replaced as shipbuilding advancements led to the larger Quadrireme and Quinquereme; ships built around four and five banks of oars respectively. The larger Quinquereme is thought to have been around 45(147 ft) meters long and displaced approximately 100 tonnes. Taking the Athenian model as a common example, these warships would be crewed by a Trierarch, or Captain, with the financial means to fund his ship and crew, a command crew made up of experienced sailors, oarsmen most commonly made up of men from the working classes who were carrying out their military service and marines made up of Hoplites, or citizen soldiers.

The balance of power in the Mediterranean shifted and the Roman Empire took a dominating position; a number of new innovations were developed in warships. Ballistae, a huge weapon with some similar design principles to the later crossbow, were now being used as deck weapons and large hooks were also being fired at enemy ships in an attempt to snag them, drag them in and force a boarding action. Roman fleets often favoured small, light Liburna over Triremes and their successors, a tactic which would be echoed by many fleets in centuries to come. The Liburna is reckoned to be between 30 and 35(98-114 ft) metres, again with a shallow draught of about 1(3.2 ft) metre.  Marc Antony’s fleet at Actium (one of the largest armadas of the ancient world) comprised of Roman and Egyptian forces with over 500 ships including 230 war galleys was defeated by the much smaller forces of Octavian under the command of the experienced Admiral Agrippa. This defeat for Antony allowed Octavian to consolidate his power and heralded in the end of the Roman Republic. Ensuring that the forces of Pompeii, Antony, and others would not consolidate against him.

As Byzantine fleets came to prominence in the 5th Century AD, the next step in the evolution of the warship was the Dromon, which most likely saw the abandoning of the ram and the adopting of lateen, or triangular rigged sails. It was during this era that some of the most significant developments in war at sea shift north of the Mediterranean, and bring us up to Scandinavia and the waters around the British Isles.

The Vikings of the 8th to 11th Century AD were known for their iconic longships and skilled seamanship, which saw their sailors navigating relatively simple vessels from their Scandinavian homelands to as far afield as North Africa and North America. Far more common were voyages of exploration and raiding closer to home, with the coasts of Britain and France being regular targets. The Viking Longship shared some design features with earlier vessels from the Mediterranean, such as a shallow draught and the combination of a single sail and oars for propulsion. These narrow, fast ships could be classified into a number of types, ranging from the 23(75 ft) metre long Karvi which was mainly used for fishing and trade, up to the 30(98 ft) metre long Skeid whose size, allowing for a crew of 70-80 men, made it ideal for raiding parties.

The English response was to build larger ships to meet the Vikings at sea - historical sources cite King Alfred as designing his own ships, up to twice the length of those of the Viking invaders. It was with these ships that two of the greatest seafaring civilizations of Northern Europe would clash in the mid to late 9th Century and whilst these engagements were of a much smaller scale than earlier sea battles in the Mediterranean, they saw the birth of the Royal Navy under King Alfred the Great.

Naval technology and strength was not merely focused on the European Nation states. By the 15th Century, The Ming Dynasty in China, under the command of the eunuch Admiral Zheng He, undertook seven grand voyages in and around the Indian Ocean with what was then the most powerful Navy the world had ever seen. Looking to secure important trade routes for the importation of raw materials and luxury goods, the outward looking Ming Dynasty sought to expand China’s influence in the region and beyond. In this period the Chinese developed advanced technology a thousand years ahead of Europe. The grand fleet consisted of upwards of 317 vessels including: three and four mast sailing ships, treasure ships that held a massive amount of cargo but were ineffective for any combat with nine masts and 12 sails. Conducting expeditions into Southeast Asia, India, the Horn of  Africa, and the Middle East. The Chinese Fleet of the Ming period reached a scope of reach never before seen. Internal struggles in the Ming Dynasty would see the end to this fleet as the costs to sail and maintain such a force was too great a cost. The Chinese would never again construct such a powerful fleet.

Commenting is no longer available for this news
Rules
Jebadias
5

Your last paragraph discusses the Chinese in the 15th century "In this period the Chinese developed advanced technology a thousand years ahead of Europe." Does this mean that they had 25th century technology?

Stona_WT, How soon is :) I can't explain why but I'm more excited about boats than I was when GF started

i guess they will drop it around War Thunder anniversary. So later this month.

Almost certainly not. I suspect they are going to work their way up from patrol boats and river boats, then frigates, and destroyers/escort destroyers are a maybe. Depending on how destroyer implementation goes (or whether it turns out to be feasible to even try) light cruisers would be next. Then heavy cruisers, and so on.

And probably once they get to destroyers, that will be OBT.

starkwolf, I feel that the patrol boat would balance out the battleships 15s+ reload vs a boat with 4 torps that can dodge and move at highspeed its kinda like light tanks in GF small bad armor but fast with big punch