T-35: The Land Battleship
20 October 2014 Vehicle Profile
Attention! This news was published on the old version of the website. There may be some problems with news display in specific browser versions. 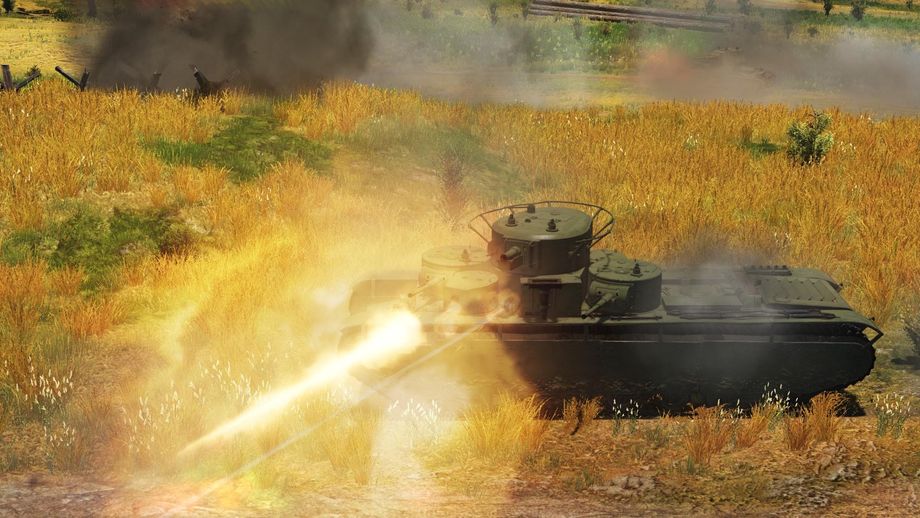 Update 1.43 brought many novelties to War Thunder, including the introduction of working multi-turreted vehicles. The T-35, with its five independent turrets of which three are equipped with cannons, not only extends the arsenal of different vehicle types available to the players of War Thunder, but also the possibility to re-create historic encounters. Available as a Soviet Rank I premium vehicle, the T-35 allows you to go to battle as a true land battleship!

In the early 30's the Soviet army drew up a requirement for a heavy breakthrough tank. As Soviet industry and it’s experience with tanks was still in its infancy. The first attempts were failures, unable to progress off the drawing board. However, after working on the issue and with the help of German engineers the project soon became a reality. In 1933, the first three of these giant land battleships, christened the T-35, began to roll off the production line. Despite several modifications and improvements during the service life, the tanks main advantage was propaganda. Bristling with guns, huge in size with it’s imposing looks it overawed crowds who flocked to the May day parades in Moscow. During a conference in June 1940 the limitations of the T-35 were fully realised and most of the conference members were of the opinion that the tank should be withdrawn.


With no replacement tank available in numbers, and the Soviets not foreseeing the German attack the following year it was decided to let the vehicle remain in front line service to allow the rigors of use to wear them out and then replace them at a later date. As the T-35 had such terrible crew escape prospects in case of it being hit this would seem to doom large numbers of men to their deaths when the Germans invaded the following year.

Luckily for the crews of the T-35, during eleven days the T-35 spent facing the German invasion 43 of the 52 or so tanks broke down and had to be abandoned outside of combat. Only 5 were destroyed through enemy action. The last four broke down on 9th of July, 1941.

This was not the end of the T-35's story. One of the survivors was used as a bunker at the Khimki bridge just outside of Moscow, however it never saw any action. The other use was reverting to the one role the vehicle was good at. A single T-35 was used in the Academy award winning 1942 film "Moscow Strikes back".

There was one more part to the Story of the T-35. One of the T-35's that littered the landscape was retrieved from near the Ukrainian city of Lviv. It was sent to the Kummersdorf testing grounds south of Berlin. As the Soviets approached in 1945 it was issued to Kampfgruppe Ritter, which consisted of the last four remaining Elephant tank destroyers. The T-35 was used as a Command tank by Hauptman Ritter. However as he moved south near the Zossen training ground, the T-35 true to form, broke down and Hauptman Ritter was captured.