Around the same time as the German Luftwaffe procured the Tornado IDS, the German navy also placed an order for around 110 aircraft. Equipping two wings of the Marineflieger, the Tornados in naval use replaced the outdated F-104 Starfighter which previously formed the backbone of the German aerial strike force. In naval service, the Tornado IDS was used to conduct maritime reconnaissance as well as fill the anti-shipping role. To this extent, the aircraft received specialized munition and went on to serve with the German naval air arm until 2005 when the units operating the Tornado were disbanded. 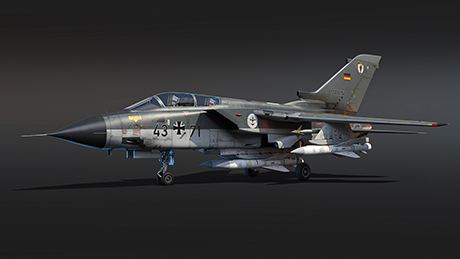 A unique version of the European multi-role jet fighter comes to the game as the main aircraft prize of the upcoming winter special event in War Thunder. The Tornado IDS Marineflieger is a top-tier variable-swing wing strike aircraft, capable of easily maneuvering at supersonic speeds and offering a good choice of the advanced ordnance.

Sharing many features with the Tornado GR.1, the German naval variant of the Tornado is also distinguished by the capability of combining superb flight characteristics with a high payload. Apart from being able to carry large amounts of conventional ordnance, the Tornado can equip advanced weapon systems. Although, the naval version has no access to the guided bombs, it can be equipped with the all-new AS.34 Kormoran anti-ship missiles with a huge load of explosives. Furthermore, the two 27 mm cannons carried on board allow the Tornado to both stand its ground in a dogfight but also to inflict some considerable damage to ground units during low altitude strafing runs. Tornado IDS Marineflieger can additionally carry Sidewinder missiles - the all-aspect AIM-9L.

The renowned Tornado IDS Marineflieger is a true must-have for fans of modern German military combat aircraft. Want one for free? Soon we will tell you how!

Whats the point of the anti-ship missiles if it will never face ships in game?

D00MWOLF, That's a GREAT point. I never go for ground in Sim, but suppose could be fun for some free RP/SL when Sim is SO dumped on for that lol.

They can be used on ground targets too, they have a secondary ground attack role.

Correct me if I'm wrong, but didn't Germany get a top tier aircraft as the main reward for last year's WINTER event too?

you are aware that at some point in 1990 the west german military and the east german military merged and suddenly the Bundeswehr was the ONLY Nato Member that had the Mig-29 in their depots? Germany has access to us- and russian tech thanks to the NVA and Bundeswehr vehicles and planes. So technically we should get 2 Mig 29s soon... the east german one and the modernized and Nato-standardized Mig-29g

Will Germany be receiving a tech-tree Tornado too or just this?

Germany will have the Luftwaffe IDS in the tree also.

Not during this update, they say it will eventually. For now the Brits will be the only ones getting it.

Wow a german top tier jet for an event vehicle. Very creative Gaijin, really. It's not like we had like how many of these before?

Any news on the Italian TT version of the Tornado? Nothing but the fact that's coming is all we know

As cool as this is there are only like 2 maps in air RB (idk about AB) that have ships you can hit with the ASMs. And for now you can't tank jets like this into naval battles. My only questions are does it have regular dumb bobs or can the ASM target tanks too?

The ASM should be capable of hitting tanks as well

Will the Japanese F-1, F4EJ Kai get ASM-1/2 and the A-6 Tram get the Harpoon and SLAM (land Attack version of Harpoon)?