Duca degli Abruzzi is the lead ship of the final Italian ‘Condottieri’ type cruiser class built for the Regia Marina in the years leading up to the outbreak of WWII. Arriving as part of the next major War Thunder update - “Apex Predators”, Duca degli Abruzzi will soon reinforce the Italian naval tree with its most advanced light cruiser design of the era!

During the early 1930s, the Regia Marina defined requirements for a new light cruiser whose capabilities should allow it to effectively face off even heavy cruisers thanks to improved combat characteristics. To achieve this, Italian shipbuilders opted for increasing the new design’s firepower and giving it a revised armor scheme at the expense of some mobility. Once the design was drawn up, an order for the construction of two ships - Luigi di Savoia duca degli Abruzzi and Giuseppe Garibaldi - was issued with both being laid down in 1933.

The construction of both vessels progressed slowly as parallel developments and tests of other warships constantly led to revisions and modifications of their design. Nonetheless, both vessels were simultaneously completed and commissioned into service in December 1937. During WWII, both vessels served as part of the VII Cruiser Division, taking part in only one major naval battle during the war - the Battle of Punta Stilo in July 1940 - in which the ships exchanged fire with Royal Navy cruisers. For the remainder of the war, the ships would only assist in secondary tasks such as escorting convoys, as they were considered too valuable to be potentially lost due to their advanced design. In July 1941, both ships suffered torpedo strikes on two separate occasions yet managed to return to port under their own power.

After the Italian Armistice in 1943, both vessels fought side by side with the Allied forces as part of several missions. Surviving WWII, Duca degli Abruzzi and Giuseppe Garibaldi would both serve on with the Italian postwar Navy for decades to come thanks to extensive modernizations during the 1950s. While Duca degli Abruzzi would ultimately be decommissioned in 1961, Giuseppe Garibaldi would go on to serve until 1971 before being retired from active service. 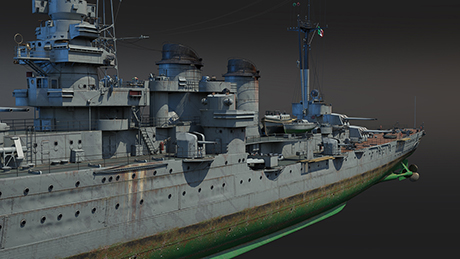 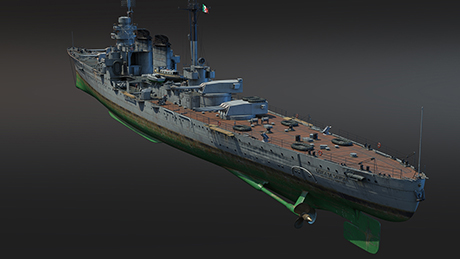 Despite being the final design to make up the broad class of the ‘Condottieri’ class of cruisers, Italian shipbuilders went a bit further with Duca degli Abruzzi in an effort to enhance its capabilities over previous vessels of the series. For starters, Duca degli Abruzzi comes outfitted with 10 6’’ guns - that’s two guns more than any of its predecessors, already familiar to veteran Italian captains. Additionally, the secondary weapons also receive an upgrade through the installation of an additional twin 100 mm turret, bringing their number up to four in total. At the same time, the anti-air and torpedo armament remains neigh identical to the preceding Eugenio di Savoia, resulting in a versatile arsenal ensuring the Duca degli Abruzzi can stand its ground in engagements against both surface as well as airborne targets.

Following the trend set with firepower, Italian naval designers also decided to noticeably improve the protection of Duca degli Abruzzi by increasing armor thickness across the board. Unlike previous ships, Duca degli Abruzzi features a 100 mm thick belt armor supplemented with a 30mm external armor, 135 mm thick turret fronts as well as 140 mm of armor encasing its conning tower. As a result of this and a larger complement, Duca degli Abruzzi is far better equipped to effectively absorb incoming enemy fire, particularly coming from other light cruisers and destroyers. However, despite these notable improvements to its protection, captains should still bear in mind the fact, that Duca degli Abruzzi is a light cruiser at the end of the day and that intensive firefights with larger and more heavily armed warships may not be the best tactic to win battles and spare the ship from an untimely demise.

Due to the increased firepower and protection however, captains will have to make due with a natural tradeoff which comes as a result of this design choice. Namely, unlike previous ships of the ‘Condottieri’ series, Duca degli Abruzzi only manages to get up to a top speed of around 32 kts (59 km/h) due to the ship’s notably increased displacement. As a result, Duca degli Abruzzi, while still being quite mobile for a cruiser design, is far slower and less agile than its predecessors. Nevertheless, aspiring captains of this powerful warship won’t have to worry about lagging behind the rest of the fleet as Duca degli Abruzzi is more than capable of keeping up with most other warships.

Duca degli Abruzzi is soon docking in players’ ports with the release of the “Apex Predators” major update coming soon to War Thunder. In the meantime, be sure to keep scanning the horizon for more news as we continue sharing the latest on what the upcoming update has in store for you. Until then, calm seas and happy hunting captains!

Dont get me wrong the Duca degli Abruzzi is a nice cruiser and i am verry happy to see the ship and its class, but i have to ask, When will more advanced Italien Battelships come to the game or maybe even austria hungarian ships, which were transfered to the Regia Marina after WW1. MFG

austrian ships... in the italian navy? Better for the German

Why not? Especially since USSR can have a captured Regele Ferdinand destroyer in the regular tree.

i do like that naval is getting some attention but man, where is the french navy?

Best boat. So glad to see it.

A long awaited ship, and a very aesthetically pleasing one too! Please keep working more and more on naval battles. It is very underrated and needs a lot more attention.