The requirements for a 4th generation fighter were developed in the USSR in 1971. According to them, the Mikoyan Design Bureau came up with a project for a light front-line fighter to provide optimal flight characteristics for modern dogfights. The power plant of the fighter was a pair of double bypass turbojet engines with afterburners, which increased the survivability of the MiG-29 in case of failure or damage to one of them. Also, twin engines easily provided the necessary thrust-to-weight ratio. The construction of the first experimental MiG-29 was completed by August 1977, and on October 6 the aircraft took off to the skies for the first flight. One of the main issues of the first serial MiG-29 was considered its insufficient fuel capacity. The second serial version of the fighter, designated “9-13” received a distinctive hump behind the cockpit, where an overhead fuel tank was supposed to be installed. Soon, however, it was decided to fill this volume with jamming equipment, and use suspended fuel tanks to solve the fuel issue. The MiG-29 (9-13) mass produced since 1986. The only foreign operator of the MiG-29 (9-13) was North Korea, whose Air Forces received several dozen Fulcrums in 1989. 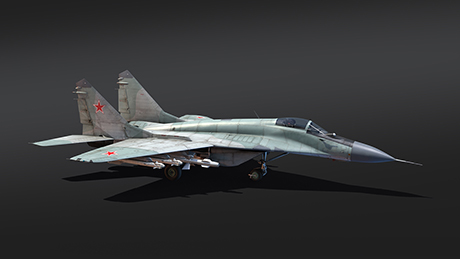 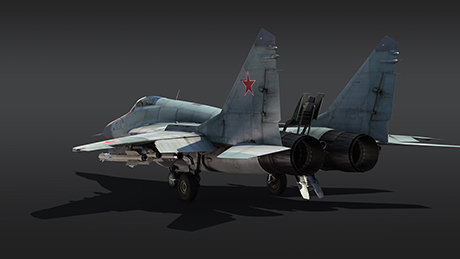 The MiG-29 (9-13) Fulcrum will be one of the first rank VIII fighters in War Thunder, which will appear in the game with the release of the Apex Predators update. This is a fast, twin-engine 4th generation interceptor fighter, capable of dogfighting at supersonic speeds and equipped with an excellent arsenal of air-to-air missiles.

Compared to the light F-16A, the Soviet fighter is much heavier and does not have a zooming throttle response, but offers a slightly better climb rate and maximum speed. As a result, the Fulcrum goes supersonic a little longer, but is able to maneuver almost freely at speeds of about Mach 1 without losing much energy. At high altitudes the MiG is able to keep high speeds of over Mach 2 and patrol the “upper floor”, controlling almost the entire battlefield.

According to its concept, the MiG-29 was designed primarily as an interceptor, but it is still able to provide air support to ground troops with conventional ordnance, such as heavy S-24B rockets, S-8KO rocket pods, incendiary and HE bombs. However, the main weapon choice of the Fulcrum is air-to-air missiles! In addition to the familiar short range R-60М missiles, the twin-tail MiG also receives new R-27T and R-27R missiles. These models are improved versions of the R-24 series in terms of the G-tolerance. The R-27T with a passive IR homing seeker has a very good jamming immunity, and the R-27R semi-active radar-homing missile has a radio correction of the inertial navigation system.

As in the case with other rank VIII fighters, we recommend you to pay special attention to the pilot training of the g-forces tolerance. A well-trained pilot will not lose control of the fighter and will allow you to fully enjoy the MiG-29 in supersonic dogfights.

The excellent MiG-29 and F-16A, as well as other rank VIII fighters, new ground and air vehicles, new locations, and many improvements and fixes are almost ready to deploy to War Thunder in the upcoming Apex Predators update! Stay tuned to the news!

Please add the MiG-29 with R73! It will not be OP because if you see the missile you can flare out any IR missile in the game!

no stop crying, its overpowered, if it should get it the f16 should as well

What happened to R73?

The MiG-29 with R-73 and HMD will be a interesting feature, this will carve the way for other exciting additons in future updates.