The Magach 7 is one of the most advanced conversions of the US built M60 tanks of the Cold War era. Old soldier gets new armor - meet the new Israeli main battle tank!

By the late 1980s, the ERA protection of the Magach 6 series tanks could no longer provide reliable protection against the shaped-charge anti-tank munitions Israeli tankers faced on the battlefield. Instead of reactive armor, the engineers proposed a passive armor module built from composite armor plates in the form of a hexagon on top of the cast turret of the M60 tank. The hull was also reinforced with sheets of composite armor, including a massive armor module on the upper frontal glacis. The new tank received the designation Magach 7, and soon went into production, but the very first released vehicles reveal mobility loss resulting from the increased weight of the tank. Upgrade program developed for Magach 7 included a more powerful engine, a new transmission, as well as improved shape and filling of the composite armor plates on the tank’s turret. The new version was designated Magach 7C, becoming the latest and one of the most technologically advanced serial conversions of the M60 tanks. At the moment, Magach 7 tanks are in reserve, and are also used to train tank crews of Israel's Merkava main battle tanks. 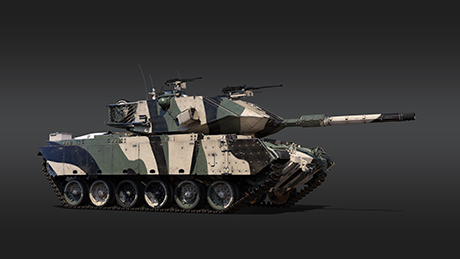 Magach 7C (Hebrew for “ram”) will appear in the hangars of Israeli tankers with the release of the next major update. The vehicle is basically a deeply improved Magach 6, with better protection and improved engine, capable of compensating for an improved weight.

Instead of ERA boxes, now the cast turret and hull of the tank are covered with plates of combined armor. The toughest protection is located in the tank’s front - the thick armor glaces of the tower are located at a rational angle, and the upper frontal part of the hull is covered by a massive overhead plate. Thus, the tank received good protection against chemical and some kinetic shells the tank may encounter in battle.

A new 908 hp engine and automatic transmission compensate the tank's mobility to a level approximately equal to Magach 6, taking into account the increased mass of the Magach 7. The dynamic characteristics of the tank are average and its maximum speed does not exceed 30 mph (or 50 km/h) even on a perfectly smooth road.

The gun and the choice of shots remained the same as on the Magach 6C, that is, in addition to the HEAT, APFSDS, HESH and smoke rounds, commanders will have the opportunity to research the M426 APFSDS shell, which is capable of destroying even some most advanced tanks in the game. The fire control system is also inherited from a previous generation. And it’s quite comprehensive, featuring a laser rangefinder and a thermal device in the gunner’s sight.

Magach 7 is probably one of the best that happened to the M60 tanks in the entire history of their production and upgrades. The new Israeli “ram” will be waiting for you in the big winter update of War Thunder. Soon!

They tease us with Rank 8 aircraft and drop a tank devblog next xD ... Nevertheless it's a cool addition, might make the Magach spam worth griding through

Lots of Rams, was hoping for a snake(python)

Why Rank VI? Do devs have any idea about how populated Israeli Rank VI is? They can give the latest APFSDS possible (M428 SWORD) and place this tank at Rank VII

Awesome! Now all we need is a high-tier light tank/IFV like the Namer and we'll be golden.

I'm hoping for the Eitan as well :D

Didn't Israel just get like 7 Magachs two updates ago?

The Magach 7C is vastly different, with really good turret armor aswell. It isn't as much of an upgrade as the Sabra MBTs, but it is big.

The more magachs the better

Now this is what I'm talking about! A well deserved vehicle for Israel... Really hoping to see a top tier SPAA or Light tank though

Hopefully we will get one day the HVSD/ADAMS as a toptier SPAA and more light tanks and IFVs as there are many options.

This is in my December update wishlist!

Oh gaijin plz , we do not need so many magaches , we need more merkavas