The new Russian 2S38 SPAAG armed with an automatic 57mm cannon comes to War Thunder as a light tank capable of countering both aerial and ground targets.

In the mid 2010s, the Central Scientific Research Institute Burevestnik in Nizhny Novgorod, Russia, developed an artillery turret with a 57mm cannon, designed for ships and armored vehicles. A little later, the module was upgraded for installation on the 2S38 platform (a modified version of the BMP-3 AFV chassis). The first prototype was demonstrated to the public in 2018, in 2020 2S38s took part in the Victory Day parade on Red Square in Moscow. At the moment, the vehicle is being commissioned for service with the Russian army. 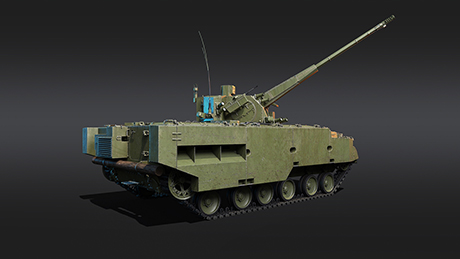 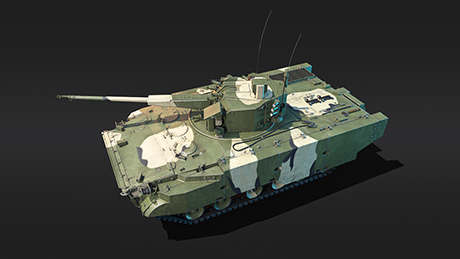 2S38 “Derivatsiya-PVO” is a new Premium light tank of the USSR/RF tech tree, which will appear in the “Fire and Ice” update. The vehicle originally designed as an anti-aircraft artillery system is able to counter both aircraft and armored vehicles, including tanks! Automatic cannon, good mobility, uninhabited turret and laser warning system make an excellent scout vehicle for high-rank battles!

The 57mm 2A90 automatic gun is a further development of the S-60 series familiar to players from the ZSU-57-2 SPAAG. On the new 2S38 it is part of an uninhabited turret, which also includes an automatic target tracking for air targets, a laser rangefinder, a coaxial machine gun, a laser warning sensor and a thermal imager. In addition to the AP and HE shells familiar from the Soviet ZSU-57-2, the new gun receives a radio fuse HE round for destroying aircraft at long distances, as well as a APFSDS round capable of destroying most main battle tanks to the sides.

The chassis for the 2S38 is a modified BMP-3 AFV with metal floats along the sides of the hull. The chassis has bulletproof armor, although able to withstand some autocannons from the front. The platform itself is quite tall and you will have to look for cover. When properly covered, the advantages of an uninhabited turret are fully revealed, allowing the commander to fire and mark out targets to allies without exposing the crew. With a high power-to-weight ratio and a good maximum speed, the 2S38 is highly mobile on all types of terrain, and the floats make the vehicle amphibious.The disadvantage of the design is the layout of the crew, in one row in front of the full, so that a single tank shot is able to wipe out the entire crew instantly.

The advanced 2S38 light tank with an automatic cannon is a great addition to the Soviet ground battle setup for top-tier battles! Premium 2S38 will appear in the game with the release of the major update “Fire and Ice” - be the first to try it in battles!

Additional info to the devblog: "in the upcoming “Fire and Ice” update the AA tracking feature will also be added for the vehicles, which have it in real life: PUMA, M3A3 Bradley, BMP-2M, and BMD-4."

Im sure the warthunder community is estatic to know russia will be recieving another VERY NEEDED addition to their tree. Hehehaha

Actually yes, it needed something with HE-VT because there's giant gap between Shilka at 8.0 and Tunguska at 11.0

So this, a premium, can get both scouting, AA capability, and light tank status (meaning SP reduction for aircraft) - while the CV90 family still hasn't gotten historical aircraft lock-on? Where is the logic?

What a horrible addition to this game. Russia absolutely did not need to be any more overpowered than they already are and yet you guys decided to add this nightmare.

You must be kidding me right now

you got to be joking.

Can I ask why this was a premium? This could've easily filled the SPAA gap that the soviet tree has.

Because its way too strong to fit in that SPAA gap and gaijin already knows that whatever BR they stick it at, they'll likely need to move it up to 11.0 eventually. Its more of a sidegrade to the tunguska than a gap fill between the tunguska and shilka. It doesnt fit in the AA tree