The “Zippo” river monitor with flamethrowers comes to the game as the main naval prize in the upcoming new Battle Pass season “Smell of Victory”!

The LCM(6) landing craft was massively produced from 1943 and became the most advanced US vessel of this type in World War II. The craft was able to transport any model of the Sherman tank, or take up to 80 marines on board. In comparison to previous versions, the LCM(6) featured increased size and higher sides to improve seaworthiness. In total, more than 2,500 units were produced that were used in the Pacific, as well as during the Vietnam War. In 1966, with the organization of the Mobile Riverine Force, a number of LCM(6) landing craft were converted into river monitors. The ramp was dismantled, a sharp bow with an armored deck and an elevated turret for a 40mm cannon and a heavy machine gun was mounted instead. Sides were covered with add-on armor to protect against chemical rounds and rockets. A “Zippo” version also came with a pair of flamethrowers at the sides of the bow. A boat in this configuration could effectively burn through the vegetation along the river banks with a fire mixture, preventing ambushes and eliminating hidden opponents. 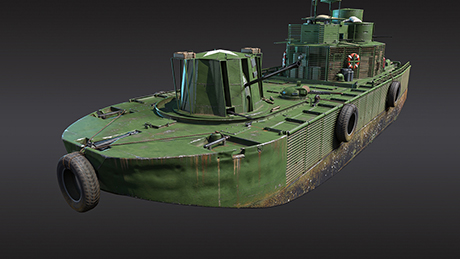 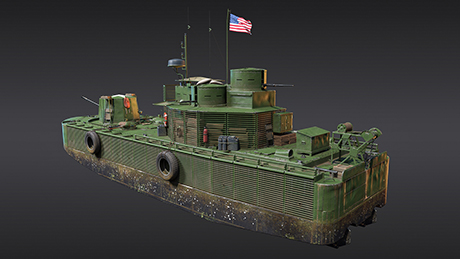 In the “Smell of Victory” season, the “Zippo” flamethrower boat will become the main naval prize for the owners of the Battle Pass. This river monitor was built during the Vietnam War by upgrading LCM(6) landing craft. Compared to the original model, the boat has advanced machine-gun and auto cannon armament: 40mm and 20mm autocannons in rotary mounts with all-round protection, one .50 Browning heavy machine gun in the same shielded mount, another two .50 cals and four rifle-caliber machine guns installed at the sides of the boat . The bow of the "Zippo" has an armored deck with anti-fragmentation armor, the sides are protected by armored screens.

The main feature in this version is two flamethrowers in armored turrets, each coupled with a 7.62 mm machine gun. Flamethrowers are located at the sides of the bow and work great in close combat. The fire mixture effectively eliminates the crew in open artillery mounts on enemy craft and sets fire to modules on open decks.

The boat is well armed for both medium and short combat distances, her crew is small, but well protected. “Zippo’s” armor is able to withstand heavy machine gun bullets, and side screens can protect the boat from the low-caliber HE shells. Perhaps the main disadvantage of the “Zippo” is her low speed - only 8.5 knots or about 16 km/h. It takes time to get to battle, where the boat is able to demonstrate all the glory of her firepower. Forget about fast capture of points, the boat is too slow. On the other hand, flamethrowers, especially effective in short-range combat, make the “Zippo” a great option for ambushing between the rocks and islands from all the important directions in battles.

The very special “Zippo” flamethrower boat is waiting for Battle Pass holders at rank III of the US coastal fleet research tree. Let your enemies burn, let your favorite soft rock play in your headphones, let the familiar gasoline smell tickle your nostrils - this is the “Smell of Victory”!

This was unexpected.... Btw the Type 95 Ha-Go has a flamethrower installed on the chassis, are there any plan to make it functional now that we have flamethrowing mechanic ?

I was hoping for this. Thank you very much gaijin! Awesome battlepass

Wow Battle Pass getting Worse look I love the ideal of Unique vehicle's but where is this going to be effective? Similar to the Church but at least you still have the gun depending on the battle ratings it also may be worthless because their logic is increase BR from 4.3-4.7 up to 5.3-5.7 because they got a weapon which you have very little Odds in Damaging or defeating.

We've finally found something slower than the SF40! Granted, it probably has more armor than this bright green box.

Looks awesome folks, but now we need submarines since this semi-useless boat is the "main prize". I don't think it'll ever get close enough to use the flamethrower, but it will still be a nice addition. Is this Gaijins "year of the Memes"?

WTH ? Are you going to switch in to the deep see fishing simulator ? :D