HMS Glorious is a WWI-era British battlecruiser purpose-built for an ambitious plan to defeat Germany through a naval invasion on its eastern flank. Despite the plan itself never materialising, the ships necessary for it did and thus captains will soon have the chance to take command of this highly unorthodox warship design, arriving in War Thunder as part of the next major update “Fire and Ice”!

During WWI, Admiral Fisher of the Royal Navy drew up a plan to invade German territory via a naval invasion on its Baltic coastline. As the plan called for capital ships that Fisher could not order for construction due to wartime restrictions, he instead designed a new battlecruiser inspired by the Renown class but featuring only minimal protection, high speed and high-calibre 15-inch guns in 1915.

Fisher’s plan called for the construction of three ships, of which the lead ship - HMS Courageous - was laid down in March, followed by HMS Glorious in May and HMS Furious in June. HMS Glorious was launched in April 1916 and completed later in October before being handed off to the Royal Navy for commissioning into service. After Fisher left the post of First Sea Lord, the concept of these ships was criticised due to the imbalance in their combat characteristics, primarily weapons and protection.

Nevertheless, HMS Glorious still took part in some major operations in the final years of WWI, such as in the Second Battle of Heligoland Bight in November 1917. The warship was also present at the surrender of the German High Seas Fleet on 21 November 1918. In the postwar period and under the terms of the Washington Naval Treaty, HMS Glorious was selected to be converted into an aircraft carrier. This conversion took place between 1924 - 1930 with HMS Glorious later on serving in WWII before ultimately meeting its fate after a clash with the German battleships Scharnhorst and Gneisenau in 1940 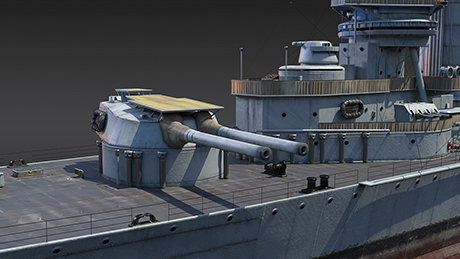 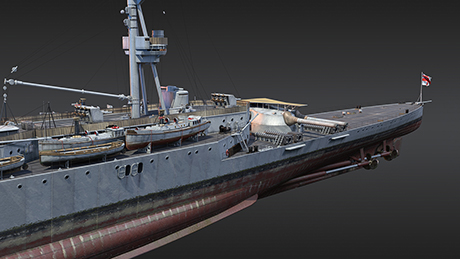 In War Thunder, HMS Glorious will be a new battlecruiser arriving at the top rank of the British bluewater fleet in the next major update “Fire and Ice”. Unlike other warships of this type already present in the game, HMS Glorious really takes the definition of what a battlecruiser is supposed to be to the extreme - featuring quite superb firepower and mobility but at the cost of having been fitted with virtually no meaningful protection. Captains, prepare to meet the epitome of the naval equivalent of a ‘glass cannon’!

As we already mentioned, HMS Glorious can boast some serious firepower. While not quite matching some of the battleships it’ll undoubtedly face on the battlefield, this rather light vessel is fitted with a pair of twin 15’’ (381 mm) cannons of the same type also fitted to the familiar HMS Hood, introduced in a previous update. In addition, HMS Glorious can also engage surface targets with its six triple 4’’ (102 mm) cannons, spread throughout the ship’s superstructure. The modest anti-air armament of the ship consists of two 3’’ (76 mm) cannons. Lastly, rounding off HMS Glorious’ arsenal is an additional 14 533 mm torpedo launchers, with a pair being submerged below the ship’s forward turret whereas the remaining six twin launchers are situated in fixed positions at the ship’s aft. As a result, HMS Glorious is capable of engaging a vast variety of surface targets, but remains vulnerable to aerial attack, like most ships of its era.

On the other hand, British shipbuilders outfitted HMS Glorious with very thin armour. Although by nature battlecruisers trade protection for speed and firepower, HMS Glorious only features minimal protection in the form of a 76 mm thick belt. As a result, HMS Glorious is about as well protected as some interwar light cruisers and is therefore susceptible to take damage from high-calibre rounds fired by heavy cruisers and especially battleships. Therefore, captains might want to rethink leading the charge against the enemy whilst commanding HMS Glorious.

Fun Fact: During its carrier conversion, the 15’’ turrets from HMS Glorious were placed in storage and were later on upgraded and reused in the outfitting of HMS Vanguard - the Royal Navy’s last battleship.

However, not being weighed down by excessive armour also means that HMS Glorious’ displacement could be kept rather low. This, in combination with a 90,000 horsepower steam propulsion system ensures an impressive top speed of 32 kts (59 km/h), thus allowing HMS Glorious to keep pace with other cruisers on its team. This is a particularly handy trait when captains can keep up with dedicated anti-air cruisers, capable of extending their protective sphere around HMS Glorious and thus eliminating one of the ship’s weaknesses.

HMS Glorious is soon docking in players’ ports with the release of the next major update coming soon to War Thunder. In the meantime, be sure to keep scanning the horizon for more news as we continue sharing the latest on what the upcoming update has in store for you. Until then, calm seas and happy hunting captains!

This is beautiful. But, it just makes me want more Italian Battleships. Where are they???

Looks like a terrible ship, should probably turn it into an aircraft carrier or something idk

I see what you did here

Now that's pretty interesting ship. I would love to see HMS Furious(BC configuration) in the future. For the memes ;)

No Sopwith Camel scout plane :( , but a nice ship to add even without them