Meet the main aircraft prize in the upcoming new Battle Pass season! A really huge payload and a very special piece of munitions onboard!

A-1H Skyraider became the most massively produced modification of the American carrier-based strike aircraft in the 1950s-1960s. The AD-6 modification, later designated as A-1H, was created as an improved AD-4B with better AA survivability. By the time the Vietnam War began, they were considered obsolete and were replaced by jets. However, a demand in ground attack missions forced the military to equip the veteran A-1H with new types of weapons and actively use the aircraft in battle, both in the Navy and the US Air Force. Notably, during the campaign, two Vietnamese MiG-17s were shot down by A-1H Skyraiders. Over 700 units of the A-1H Skyraiders were built. The aircraft was intensively used by the South Vietnamese Air Force, and after capitulation, the aircraft served in the armed forces of the Socialist Republic of Vietnam, where they found limited use due to a shortage of spare parts. 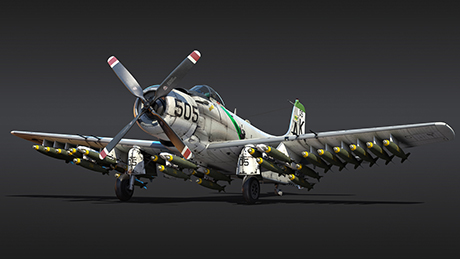 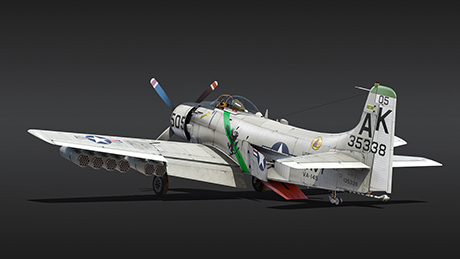 In the new season of the War Thunder Battle Pass, the “Smell of Victory”, which we dedicate to flamethrowers and napalm, it was impossible to skip the A-1H Skyraider, one of the most famous napalm aircraft ever. Skyraiders enjoy well-deserved respect from US pilots and tankers. These are classic piston-engined attack aircraft of the American school, real workhorses of rank IV. Their worn old wings are capable of carrying an impressive payload, and four 20-mm cannons are able to rescue other pilots from enemy fighters or light anti-aircraft guns on the ground.

The A-1H Skyraider will be the new member of the attacker family, and the most advanced one. The main difference from the AD-2 and AD-4 is the significantly greater weight of the suspended weapons. Among the most interesting options are 30x250lb bombs, up to three 2,000lb bombs, and a much larger number of FFAR unguided rockets. In addition to the greatly increased payload, this attack aircraft carries new types of weapons for the series - incendiary bombs and 7.62mm minigun pods, as well as flares to protect against guided missiles.

Fans of aviation know well the remarkable photo of the A-1H Skyraider aboard the USS Midway aircraft carrier, on which, among the usual range of weapons, a porcelain toilet is mounted on the wing pylon - a mark of 6 million pounds of bombs dropped in Vietnam. War Thunder pilots who will take part in the new season of the Battle Pass will have the opportunity to send a porcelain round to ground targets. Yes, you can take one toilet bomb into battle! With a direct hit, the lavatory equipment can knock out a misfortuned crew member in an open compartment of an enemy vehicle. Although the toilet can’t hurt the material of an armored vehicle, it will definitely hurt the feelings of self-assured tank commander!

The new A-1H Skyraider and dozens of other prizes are waiting for you in the new season of War Thunder Battle Pass! The Devblog about the third prize and the full list of terms for the new season come very soon! Stay tuned!

Thankyou very much for adding this Infamous aircraft, with its very unique weapon type. It's been on my Wishlist for many years and so happy it's coming.

the battle pass should have unique vehicles,not generic. its not like its "unobtainium" the battle pass is really good value for the GE spent and getting to level 75 is very easy if you play the game regularly lol

This thing has a "toiled bomb" and the Battle Pass is called "Smell of Victory". I don't know what to say. (It's funny tough)

I really hope the Kill Icon for the Toilet is going to be unique too and not just a standard bomb icon.