The Bosvark is a South African wheeled SPAAG, developed in the late 1990s on the back of the SAMIL-100 truck chassis. Soon, fans of the South African ground vehicles can look forward to the arrival of the Bosvark in the British ground forces tree, coming to War Thunder as part of the next major update!

During the South African Border War, lasting throughout the 1960s up until the late 1980s, the South African Defence Force (SADF) managed to capture large quantities of ZU-23-2 towed anti-air guns. Being in popular use by Angolan forces, the SADF used these guns primarily for base defences and training. After the war these guns were no longer required and put into storage.

In the early 1990s however, the SADF sought to mount the newly purchased ZU-23-2 on a mine-resistant chassis. Shortly after, ARMSCOR identified the SAMIL-100 transporter as a suitable platform and modified it to house the ZU-23-2.

The first prototype underwent testing in April 1991 and serial production followed by the end of the year. Surprisingly the ZU-23-2 gun was meant to be used in the ground support role, rather than primarily in the anti-air role.

Bosvark, as it became known, entered service with the 10 Air Defence Artillery Regiment of the South African National Defence Force (SANDF). The Bosvark is yet to see combat action and is only operated by the SANDF. 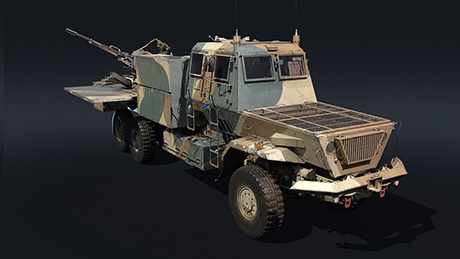 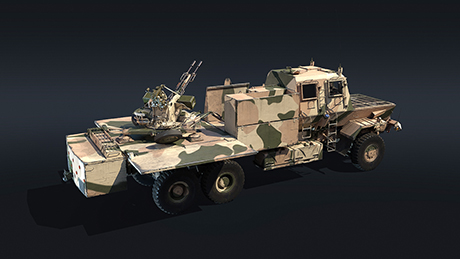 In War Thunder, the Bosvark will be a new South African SPAAG awaiting British tankers at rank IV in the next major update. Sharing many fundamental design choices to the already familiar Ystervark, the Bosvark can in many ways be considered its upscaled evolution despite the vehicles not sharing a common development history.

Being a far larger platform, the Bosvark is fitted with the twin ZU-23-2 turret, familiar to some Soviet tankers from the BTR-ZD, introduced in a previous update. Featuring an excellent rate of fire and favourable ballistic properties makes this gun platform an ideal choice for engaging low-flying aircraft as well as lightly armoured ground vehicles. However, one thing which aspiring commanders will have to bear in mind though, is the relatively limited magazine capacity of the ZU-23-2. As a result, gunners will need to be veary of their trigger discipline in order to avoid having to reload in an unfavourable time as each cannon only has a 50-round magazine which gets spent quickly due to the guns’ high rate of fire.

Fun Fact: The Bosvark received its name after the South African bushpig, which is armed with impressive tusks used to digging up roots and self-defence against predators.

On the flip side of the coin however, the Bosvark is only equipped with the lightest form of protection for itself and its crew. While the driver’s cabin is encased in a thin veil of 10mm steel armour plating, the fighting deck toward the rear of the vehicle is completely exposed, thus leaving the crew vulnerable to shrapnel, machine gun fire as well as strafing runs by aircraft. Furthermore, unlike the Ystervark, the Bosvark is a far bigger platform and thus also much more difficult to conceal from prying enemy eyes. As a result, aspiring commanders of this machine are best advised to take up a position in the second line and support advancing allies by providing them with anti-air protection. Alternatively, keeping a close watch on the flanks for advancing hostile fast movers is another great way to assist your team and score ground frags in the process!

Meet the Bosvark SPAAG in the upcoming War Thunder major update, coming soon to rank IV of the British ground forces tree. In the meantime, make sure to stay tuned to the news in order not to miss out on the latest developments regarding the upcoming major update. Until then, happy hunting tankers!

As we all know, Warthunder is a MMORPG game

Noice, can we expect new aircraft for Italy?

the are that connects the hood with the cab is cursed

im pretty sure they designed that hood intentionally since South Africa's climate is very harsh and having it exposed would prevent overheating.

My R3 will shread through this.

hopefully we see autocannoni or more version of R3

It will be best update ever! I need that immediately!