Fusō is the lead ship of a pair of battleships built for the Imperial Japanese Navy before and completed during WWI. Despite being a pre-WWI design, Fusō served throughout the interwar period and in WWII thanks to modernization and is about to embark on new campaigns after its arrival in War Thunder in the next major update — Fire and Ice!

Briefly: A Japanese WWI-era battleship, built to outmatch other contemporary battleships through the use of superior firepower.

After the launch of HMS Dreadnought in 1906 and HMS Invincible in 1907, two new warship classes emerged - the dreadnought and the battlecruiser. This caused considerable problems in Japan’s naval expansion plans as suddenly all ships currently in construction became obsolete. The decision was made to build newer ships, but due to an economic recession at the time, only one new battleship, later becoming the Fusō, and four battlecruisers (Kongō-class) were ordered.

Fusō was laid down in March 1912, launched two years later and commissioned with the IJN in November 1915. Despite entering service during WWI, Fusō didn’t see any action in The Great War as the Central Powers’ forces were no longer present in Asia at the time anymore. In the interwar period, Fusō conducted several training missions and underwent two full reconstructions between 1930 - 1941, substantially changing the ship’s visual appearance and improving her combat capabilities.

By the start of WWII, Fusō was already considered to be a dated design, surpassed in combat capabilities by newer warships. Because of this, Fusō was largely relegated to auxiliary roles during the conflict, seeing little frontline action. Fusō’s most notable engagement was also to become her last. Taking part in the larger Battle of Leyte Gulf, Fusō along with her sistership - Yamashiro - were both sunk in the Battle of Surigao Strait in October 1944. 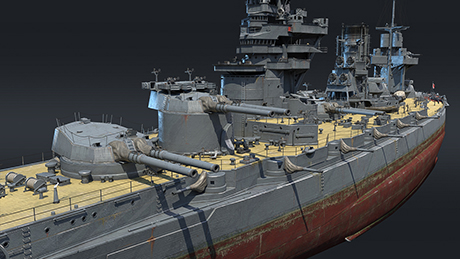 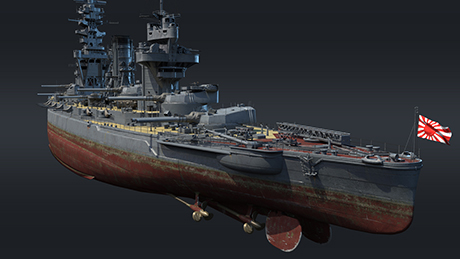 In War Thunder, Fusō will be a new battleship coming to the ranks of the Imperial Japanese Navy with the release of the next major update, Fire and Ice. Coming to the game in its late WWII refit, Fusō packs some serious firepower thanks to its numerous large and medium caliber guns, while at the same time bristling with short-range anti-air weapons and also featuring strong armor protection, typical for this class of warship!

Fusō’s primary armament consists of an impressive six twin 14’’ (356 mm) turrets, evenly distributed down the entire length of the ship. Possessing good firing angles and equally respectable ballistic properties, Fusō is capable of inflicting tremendous damage upon its enemies even at long range engagements, but especially when firing off a full salvo at a single target.

Naturally, Fusō also possesses a healthy secondary battery, consisting of 16 6’’ (152mm) cannons, with eight guns being mounted in casemates above the armored belt on either side of the ship’s hull. Additionally, Fusō’s dual-purpose armament consists of four dual 5’’ (127 mm), which can engage both aerial as well as surface targets. Lastly, Fusō’s dedicated anti-air battery consists of an impressive 89 25mm cannons! These are split down into 16 dual, 8 triple as well as 33 single turrets. AA battery is complemented with 10 heavy machine guns - it will take a truly audacious and skilled pilot to break through these AA defences!

Being a battleship, Fusō doesn’t just come fitted with impressive firepower, but also strong armor protection to boot. Namely, Fusō’s main belt reaches 305 mm in thickness at its strongest points - a standard figure found on most other contemporary battleships of the time period. Equally well-protected are Fusō’s main turrets and conning tower with up to 279 and 305 mm of steel armor, respectively. In addition to strong armor, another aspect which will boost Fusō’s combat endurance is the size of its crew. Namely, arriving to the game in its late WWII refit, Fusō is crewed by a total of 1,900 sailors, thus having one of the largest complements in the game!

As a result of all that firepower and armor protection, Fusō subsequently also displays an impressive displacement of 35,900 tons, which when coupled with its 75,000 hp propulsion system, can bring the floating fortress up to a top speed of 21 kts (39 km/h). As a result, Fusō has rather average mobility in comparison with other contemporary battleships.

Fusō is arriving to the game as part of the next major update to War Thunder and will become available to all captains for research in the ranks of the Japanese navy in the game. In the meantime, make sure to stay tuned to the news as we continue revealing what other exciting new additions the next major update, Fire and Ice, has in store for you. Until then, calm seas and happy hunting captains!

Beautiful, beautiful! As a Naval enthusiast, seeing Battleships and Battlecruisers is always a treat, even if I don’t have the tree (yet). However… please, BB/BC repair costs need to go down AT LEAST by 50%. I had to stop playing Naval because every match is a net loss of SL just for dying once. I would really like to be able to play Naval... :(

SPANISH_AVENGER, I had the same problem, until I got a premium account. Now I always have enough silver lions. Remember, War Thunder is free to pay, but it sure is not free to make. If you can play so much you reach the battleships, then surely you appreciate the game enough to buy some premium?

I have a very important question. We are getting the Fuso in its late WWII refit? But why we havent got the Andrea Doria in its WWII refit variant?

Hopefully a rebuilt Caio Duilio or a rebuilt Conte di Cavour class will come. Or... just maybe (preferably) a Francesco Caracciolo. Want me some 15in guns

Obligatory "Reee why ship"... Now that that's out of the way, why don't we all focus on actually enjoying the new content and look forward to seeing what's coming.