In the midst of the war, the American Navy was in dire need of fast and agile torpedo boats. The Elco shipyards, the main supplier of the US mosquito fleet, very quickly ceased to cope with the growing volume of orders, so the company management was obliged to transfer the documentation for the production of boats to two more shipyards - the Huckins Yacht Corporation from Jacksonville, Florida, and Higgins Industries from New Orleans. The 78 ft. boats at the Higgins Industries shipyards were built entirely of wood, which somewhat reduced their top speed, but the seaworthiness and maneuverability of the series remained unchanged. Most of the boats entered units of the United States Navy in the Pacifics and were intensively used against Japan. A significant part of the boats were delivered under Lend-Lease: of the 221 built boats, 52 were transferred to the USSR and another 24 to Great Britain.

The PT-658 was also supposed to be Lend-Leased to the USSR, but by the time of construction on July 30th, 1945, the war in Europe had already ended and the delivery was canceled. The boat did not participate in hostilities and was used as an auxiliary and transport vessel. In 1958, the boat was bought into private ownership, and in 1993 it was donated to a non-profit organization of veterans and enthusiasts for restoration. By 2005, the PT-658 torpedo boat was completely rebuilt and is currently one of two fully operational PT-series patrol boats. The boat takes part in shows and is currently displayed as a living exhibit at the Vigor Industrial shipyard in Portland, Oregon. 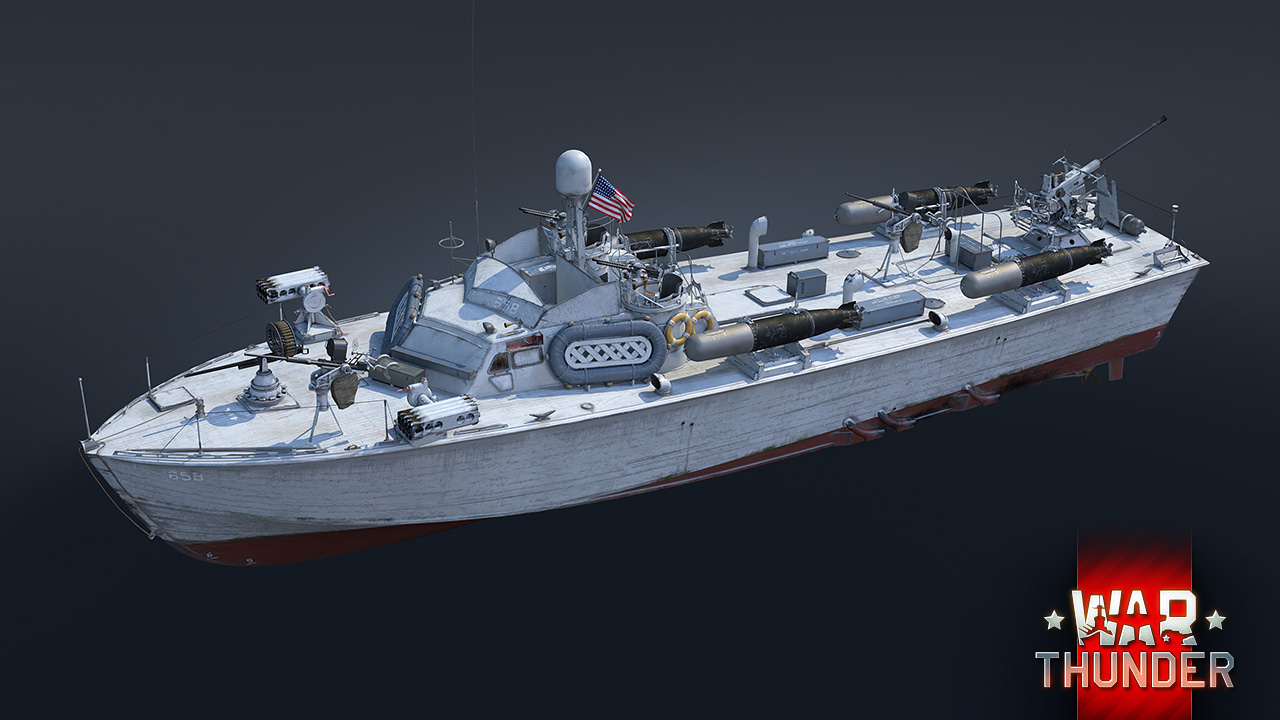 The Higgins-built 78ft. boats of the 200 series are already familiar to War Thunder coastal fleet enthusiasts. These are fairly fast and well-armed boats with a wooden hull and a small crew. Boats are unable to provide any protection to the crew and internal modules even from machine gun fire, so they find their use in quickly capturing points and ambushes among islands and rocks.

The PT-658 boat in our game will be one of the prizes for the participants of the new Battle Pass season, which will soon start in War Thunder. The premium PT-658 fully inherits the advantages and disadvantages of the series. The boat is well-armed: a 40mm Bofors at the stern, a 37mm autocannon at the bow, a pair of 20mm Oerlikons and 4 large-caliber machine guns make it an unrivaled hunter of enemy boats and light aircraft. The PT-658 has a rich selection of additional weapons: you can combine 4x569mm torpedoes, depth charges and 16 unguided rockets. Unfortunately, the wooden structure is vulnerable to damage and the small crew do not allow the boat to survive for long under enemy fire. Even rifle calibers are deadly not only to the crew, but also to the internal modules. 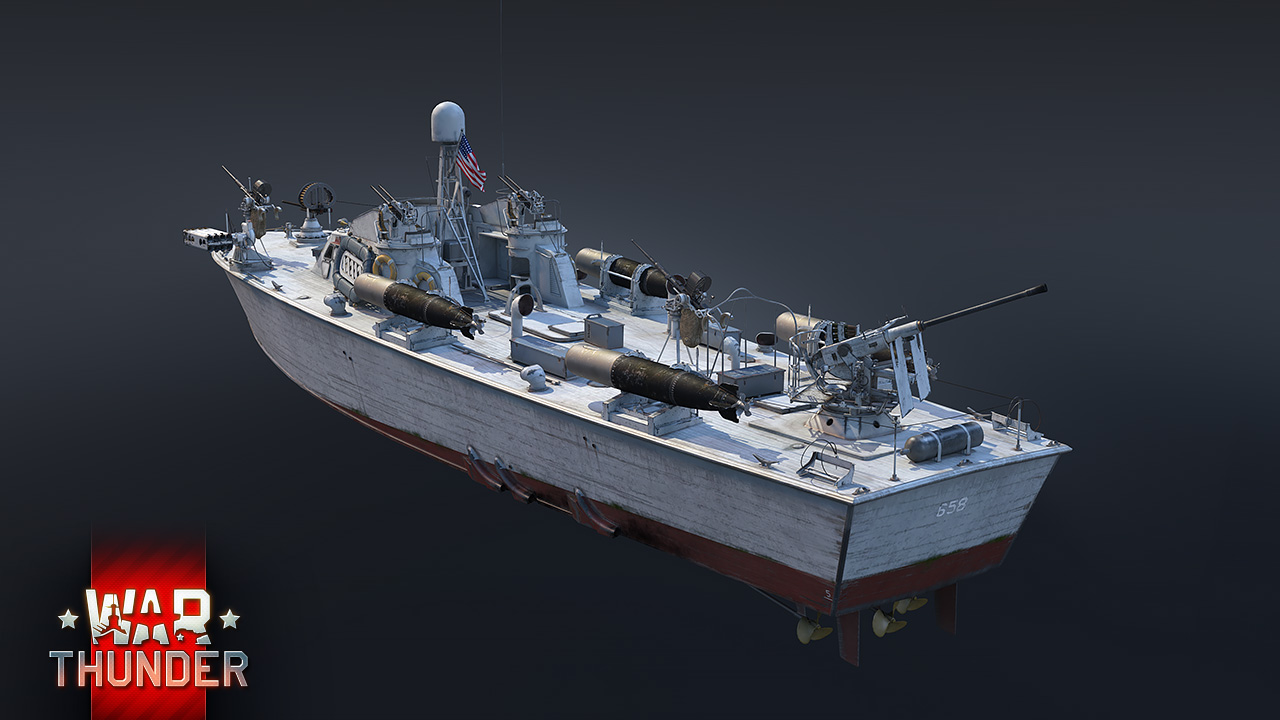 The most profitable tactic of using the PT-658 is to quickly capture points under the cover of a smoke screen, engaging in short fire contacts with enemy scouts. As long as the boat is able to move, it must not stop, otherwise any serious enemy will easily cripple the wooden American with the first salvo. Capture one point - retreat and move to the next one. Premium bonuses PT-658 will bring a good income for each captured point and each enemy shot!

I helped in the restoration of this boat IRL. I repraired the propellers, struts, rudders and shaft logs for the 658. I have probably close to a thousand photograph's of the interior spaces of the boat. So cool they are adding it.

Whoa :O You did great job with the boat! Can you contact me on our forum, via PM?

It is indeed a fascination little boat, and a veritable arms mash-up. Nice one. o7

So I mean, is France getting anything other than a tech tree ebr and a premium 2.3 spaa? I mean look at it from a person who plays France's point of view. There is a LITANY of modern vehicles that could/can be added, including a massive gap in spaa that could be filled. Lets also realize that aside from its spaa, there are almost a dozen aircraft that could be added, well within the current tech stage of the game, and none are US planes. I mean, a 2.3 premium spaa? Why not one for the BR gap?

France will get it when they get it. Yall always complaining about something.

dozer doing the lord's work as per usual, it's insane how little gaijin cares about the French tree

LancePosting, It's my fault I didn't choose one of the Gaijoob holy tech trees like Germany or Russia, I admit that.

I'd rather copy paste as battle pass/event vehicles. So if you don't get it isn't lost to you forever.

Conte_Baracca, Oh yeah, just let's copy free vehicles and lock them behind 2k GE BP, see, this way it's good, but when the craft is unique then it's bad! Get the head out of your ass and stop watching mediocre youtubers with arguments of a child.

Minor variations are much better as event vehicles, so iconic things don't get locked out for newer players or those who can't throw their life savings at the game constantly.

Stona_WT, Will next season include backups boosters and orders as prizes?

ngl its nice they do a boat for once instead of a ship, adds a bit of variety to the rewards :)

could be, but only The Snail knows

Next battle pass vehicle, Swedish Pbv 501. You can do it, I believe in you!

datamined were this bote, Russian PT 76 with 57mm autocannon and french LVT SPAA with 1x 40mm bofors and 2x fiddygal.

Would be cool but top reward is confirmed as pt76e.