PGZ04A: A much anticipated Chinese SPAA
20 May 2021 Development

In the late 1980’s, Chinese engineers began work on developing a self-propelled anti-air vehicle in order to meet the demand of the PLA for a replacement for towed AA batteries, capable of engaging low flying air targets. The first prototypes were designated Type 90-II and Type 90-III, having their general design resembling that of the Italian SIDAM 25. Thanks to its much simpler design, the prototypes passed testing relatively quickly, leading to the vehicle entering service in the 1990’s under the designation PGZ-95.

Shortly after entering service, modifications were carried out to arm the PGZ-95 with four IR missile launchers above each of its guns in order to extend its range and increase effectiveness. As a result, the PGZ-95 became more comparable to the Soviet ‘Tunguska’ SPAAG. The modified PGZ-95 was subsequently first shown off to the public in a military parade in 1999.

A decade later, during another military parade in 2009, a further modification of the PGZ-95 was revealed to the public. The new vehicle, designated PGZ04A, featured more capable IR missiles and an improved fire control system among other improvements. This version of the vehicle still serves with the PLA to the present day. 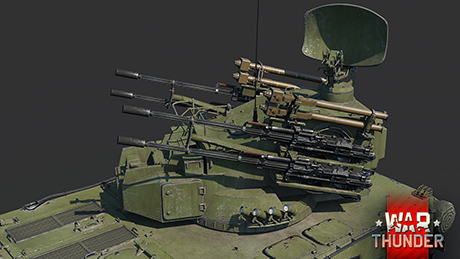 In War Thunder, the PGZ04A will be a new SPAA vehicle awaiting tankers at the top ranks of the Chinese ground forces tree in the next major update coming soon to the game. Armed with a quadruple 25 mm turret and backed by IR missiles and a radar system, the PGZ04A will substantially bolster the Chinese SPAA lineup at the higher ranks and provide its comrades in arms with some truly effective cover from hostile aircraft!

The PGZ04A’s primary armament consists of a quadruple 25 mm turret, equipped with the PG87 cannons which some tankers may recognize from the ZSD63 SPAAG, introduced in a previous update. PG87 cannons are highly regarded for their excellent rate of fire and good ballistic properties, ammo comes in separate belts.

However, 25 mm autocannons only have a limited engagement range of about 2.5 km, meaning they’re really only effective as a short-range weapon against aircraft already in the combat zone. In order to intercept aircraft before they arrive to the battlefield, the PGZ04A also has access to four HY-6 IR-guided missiles, mounted in pairs above its guns. The missiles can engage targets up to 6 km away and thanks to their ‘fire & forget’ nature, don’t require any further input from the vehicle’s commander after launch.

Like most vehicles of this class, the PGZ04A isn’t very heavily armored. In fact, having only plain steel armor plates of up to 15 mm thickness, the PGZ04A is at best protected only against shrapnel and machine gun fire, while anything more powerful than that will make short work of its lightly protected chassis. Therefore, aspiring commanders of this machine are well-advised to position themselves in the second line where they’ll be less likely directly engaged by other enemies on the ground.

Based on the chassis of a self-propelled howitzer, the PGZ04A boasts very respectable mobility. Thanks to its 383 horsepower diesel engine and relatively modest combat weight of just 22.7 tons, the PGZ04A can reach a top speed of 55 km/h on roads while still maintaining decent overall mobility even in more difficult terrain. As a result, tankers should have no trouble traversing the battlefield and quickly changing positions in the PGZ04A - a tactic that’s well worth sticking to if you wish to remain an elusive target both for enemy ground and air units in particular!

The PGZ04A is soon arriving to the top ranks of the Chinese ground forces tree with the release of the next major War Thunder update. In the meantime, make sure to stay tuned to the news to catch all the latest developments surrounding the upcoming update. Until then, happy hunting tankers!

Commenting is no longer available for this news
Rules
AbigailxCake
56

Hopefully this sates some of the masses.

finally, after nearly 2 years in the game, china gets a radar SPAA! Very nice indeed

modern_primat, No one but you cares for the Sabra. Stop spamming.

Will the IR missiles finally be useful or about as useless as the ones on Type 93 and that italian spaag with IR?

They are basically Chinese IGLA's, so they will be very good against low flying and slow flying planes and helis, that are for some reason close to you

Dncmaster, well with only 6km Range, this thing will be weak vs the A-7d and its Mavericks

Finally, thank you so much devs

Every time somebody says this they should back them off another patch.

Conte_Baracca, who even plays china...

They will be the US F5-E, the Chinese J7-E and F5-E ADIC, the Russian mig23m and the German F4F (late). You can Google them for information if you can't wait for their dev blogs :)

Xtanol, I'll look them up, but it'd be nice if we got official confirmation :)

Cawws, Don't you America players have more child soldiers to shoot in afghanistan?

you will not sleep good tonight :)

yes yes, i hope next dev will be any vehicle that you wouldn't like again)))))

Here's hoping for an entire patch of just chinese vehicles just to spite racist scums like you.