The British light cruiser Liverpool belongs to the Town-class cruisers of the second production series, with a more powerful power plant, a different setup of anti-aircraft weaponry and slightly improved armour. Liverpool was laid down in the shipyards of Govan, Scotland during 1935, and entered service in 1938. Initially, the ship was assigned to the East India Fleet Station, where it saw the outbreak of World War II. The war marked the beginning of the cruiser's active combat service, during which she took part in battles in almost all key theatres - from Chinese waters to Arctic convoys. HMS Liverpool guarded trade routes in the Hong Kong area, hunted Italian convoys in the Mediterranean and fought in Calabria, where she was soon damaged by an unexploded bomb that penetrated the fore bridge and gun deck. After being repaired, Liverpool supported the Maltese convoys, where she was damaged again, this time by an Italian torpedo, literally losing her bow. During her stay in US shipyards, she underwent long and complex repairs, and then returned to her native Scapa Flow to be assigned to the Arctic convoys in the Barents Sea as an escort.

After the cold waters of the Soviet North, Liverpool again went back to the warm waters of the Mediterranean Sea, where in 1942 she was again attacked by Italian torpedo bombers, getting damaged in her stern engine room and jamming the steering gear. Fighting off the constant raids of the Italians, the cruiser managed to get towed to Gibraltar, from where Liverpool went for repairs to Great Britain, where she remained until the end of the war due to a lack of personnel. After World War II, she returned to service in the Mediterranean as the flagship of the 15th Cruiser Squadron. In the early 50’s, it was decided to significantly modernize Liverpool, but due to a reform of the fleet and the emergence of new, more advanced types of weapons, the plans remained unfulfilled. In 1952, the ship was decommissioned, and in 1958 it was sold for scrap. 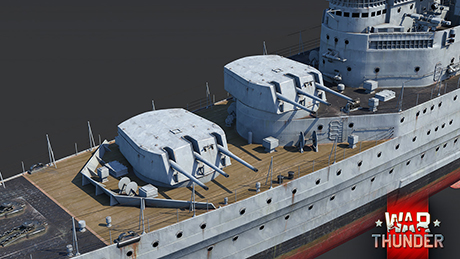 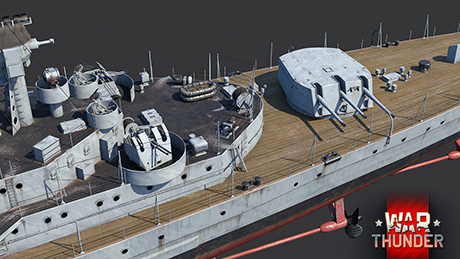 In our game, the light cruiser Liverpool will be a battle reward for members in War Thunder squadrons. In many ways, Liverpool resembles its "classmate", the British cruiser Southampton, differing from her by a dismantled main battery turret and the configuration of its AA artillery. In the course of a long and eventful service, the air defense battery of the cruiser Liverpool was repeatedly changed. For the game, we have implemented the positioning of the AA weapons at the time of her decommissioning in 1952.

The main guns of the cruiser are 9 152mm Mark XXIII guns in three turrets, four mounts with two universal 102 mm guns and two triple torpedo tubes. The anti-aircraft batteries on the ship are all 40mm Bofors guns - 6 twin-barreled Mark V and four single-barreled Mark VII mountings. The armour of the light cruiser reaches 114 mm in the armour belt, with the front armour plates of the main battery turrets reinforced to 102 mm. The decent speed and relatively fast reloading of the main battery guns make the ship a good choice for active combat with frequent maneuvers, while excellent semi-AP shells quickly becoming available to Liverpool. The Town class, already known for its survivability, is now able to resist enemy aircraft even better thanks to its reinforced air defense battery - not every pilot will dare to challenge the fire from 16 Bofors guns!

The light cruiser Liverpool will be a new squadron vehicle that will become available to War Thunder squadron members in the next major update of the game. Stay tuned to our news!

Commenting is no longer available for this news
Rules
Pookmeister
22

I hope that rly soon.

I hope its coming this patch, Su-17 is disapointing and MiG-21s are slowly becoming really boring

WreckingAres283, it is almost as if flying an Su-17 is not as fun due to it being built to be a rugged ground strike aircraft with air to air capability as an after thought

Agreed. Really happy for a nice midrange cruiser for BRITAIN and a SQUADRON vehicle.

Conte_Baracca, indeed its nice to have a CL as a squadron vehicle ^^

It's so rare to find people who are positive about naval. I like it. I like naval so this is nice.

OrangetailGaming, I'd be more positive about naval if naval was a positive experience.

Awesome! Now give us naval EC to use it in!

It's ridiculous that Italy still doesn't have the Dardo and Freccia ifv, and no battleship either, meanwhile the Ussr gets 10 vessels based on italian designs.....

Thats fun, but you know what we want - it starts with MiG and ends with 23.

Where's the "we" in this? There is no "we." Everyone wants different things. Even if some of those things overlap, there is no one collective "we."