One of the last mastodons from the heavy armour era, the experimental M6A2E1 tank is truly heavy and truly American!

In the midst of World War II at the American Baldwin Locomotive Works (BLW) began production of an experimental series of heavy tanks, which were supposed to form the image of the new American "heavies" both for the US Army service, and for lend-lease to the Allies. The initial design for all three versions was the M6 ​​heavy tank, on the basis of which they tested new hull features, improved transmission, better armour protection and increased firepower. In August 1944, the factory received a recommendation to modernize the most promising of their experimental projects - T1E1 heavy tank, which was to be assigned the M6A2 index.

The modernization involved the installation of additional armour plates on the frontal part of the hull, as well as the installation of a new turret to accommodate a new 105mm cannon. The first two M6A2E1 units from the experimental series were sent to field tests, where they showed low dynamic qualities. Even an incompletely loaded tank ((63,5 tons out of the designed 69,8)) could not overcome a 24 degree slope and literally got stuck in the ground. The second unit, intended for firing tests, revealed the need for radical improvements in the turret and gun, which were later implemented for the T29 heavy tank. As a result, by December of 1944, all three BLW designed experimental versions of the tank based on the M6 were declared obsolete. Both M6A2E1 prototypes were scrapped, with the only surviving T1E1 currently on display at the US Army Ordnance Museum in Aberdeen. 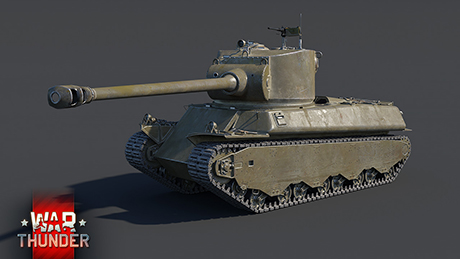 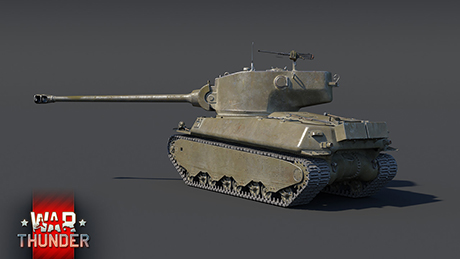 War Thunder hasn't had new heavy tanks for a long time. Meet the premium American M6A2E1, a true old school armoured giant and one of the heaviest tanks in the US lineup. The chassis of the tank is a modified and reinforced T1E1 heavy tank. The machine gun and the driver’s hatch on the frontal part of the hull are welded,with an additional armour plate appearing instead. The turret of the tank is distinguished by its strong forepart, especially the mantlet. The 105mm T5E1 gun with good elevation angles is also familiar to experienced War Thunder tankers from the T28 and T95 self-propelled guns. The choice of shells is quite traditional for late-war tanks: a chamber round, a high-explosive fragmentation and armour-piercing shell with armour penetration of about 290 mm.

The huge mass of 69,8 tons affects the speed of the M6A2E1 - the tank is slow, especially in mud, soil and ramps. Due to its large size, the tank is also highly noticeable, so it will not be easy to hide it. On the other hand, unlike other late American heavy tanks, the M6A2E1 is harder to penetrate from the whole frontal projection. Only the cannon and the sides of the hull are the vulnerable spots on the M6A2E1 when firing head-on - the latter sides, however, are located at a specific angle, so you can hope for ricochets.

The M6A2E1 premium heavy tank is one of the main prizes in the new season of the War Thunder Battle Pass and will be yours by completing the ingame tasks. This tank will not only bring a lot of fun while playing on the American ‘Maus’, but will also be an excellent tool for exploring top US tanks due to its premium status!

Commenting is no longer available for this news
Rules
TheGoldenThrone
47

Sgt_Castillo, lol scrub, Sweden reigned surpreme for a good while, and is still one of the nations with best winrate in top tier.

If my sources are correct, Italy is getting a new low tier premium tank from Hungary in BP 3. There's also going to be a Russian cruiser.

Are you sure this model is correct? M6A2E1-1 front hull definitely does not look like this in the photos available.

I think they copied the wargaming hull design for the mutant, i might be wrong and that could be a historical hull, but as you mentioned i have yet to seen it in any photos of the mutant

Parkmeyer, Thats what its final specifications were supposed to be. There are similar vehicles already added which were never built to their final designs IRL yet are in warthunder, so I would consider this fair game

SilverFortyTwo, There had been two prototypes of M6A2E1 one with number 1 and second without surprise with number 2. But actually it's neither as they had never been fitted with that additional frontal armor plate.

Why did you give it an UFP it never had? There were plans for that slope but it was never installed on any of the 2 prototypes.

The prototypes were never fitted with the plate as they were incomplete and only for testing. We have introduced the tank based on historical information of its fully completed to specification configuration with the extra armour protection plate on the front.

Smin1080p, in other words you just baught the model from wargaming and implemented it in to the game simply becouse it is cheaper and faster

Honestly why not? I would say to actually include both, rather than just the prototype or the intended production model. Like with the Ho-Ri.

Portugueseotaku, yea, sounds like a good idea maybe for a event or tech tree or smth, idk. america doesnt really need it but it could go 5.7-6.3 i suppose

Food for the undertiered Leopard 1

''according to our statistics''

or leopard is food for this thing, either are correct

thehelio33, Leopards are food for anything that hits it with bigger guns than potato canons. the thing still is who hits who first?

This tank would need a lot of 3d decorations :D

Also Stona, why does this tank have a front hull that isn't what it was like IRL? There were plans for an M6A2E1 with this hull design but that plan was never built, all we have is the drawings and the M6A2E1 Mutant from WoT which is based off that plan. The real M6A2E1 never had this frontal hull design.

MAN is this the UGLIEST tank ever

ever seen a PRC mbt? Those looks way shittier

jager718, Hahaha, your aesthetics may stay in the primitive society of Africa

This is the incomplete prototype that was not fully completed with the additional armour plate the tank was intended to have on the frontal glacis. Our tank is the fully complete tank.

Smin1080p, so you are going to implement vehicles that never actually existed, instead of implementing vehicles that players have been asking for for years and years just like B-26 Marauder, He 280, etc etc

FinnishFighterE6, Yet, the HSTV-L is made entirely out of structural steel because "that's what the prototype was actually made of". Ah Gaijin make up your minds.

A long time since heavy tanks? There was one in just the last battlepass before this one. :p

Can almost any "heavy tank" within 1BR of the HEAT/railgun BRs really be called much else but target practice?