The German Phantom II in a special export version and with a unique camouflage for completing tasks in the upcoming crafting event in War Thunder!

In the early 1970’s, Germany decided to purchase a "simplified" version of the American F-4E Phantom II jet fighter: it was assumed that in order to reduce the price of the expensive aircraft, some of the equipment would be produced in Germany itself. So, the export "Phantom" had simplified radar equipment, lost one of its fuel tanks and equipment for refueling in the air. Initial export models also lacked some guided weapons, including AGM-65 Mavericks. The power plant of the fighter had also become a subject of cost reduction by Germany deploying licensed production of the engines.

The new aircraft, designated F-4F, successfully completed tests in 1973, and in the fall of the same year the first fighters from 175 units ordered went to Europe. German "Phantoms" proved to be in the best service and subsequently went through several cycles of modernization, as a result of which the fighters were supplemented with some "missing" equipment that met the needs of the Luftwaffe. The F-4F Phantom II was in service for nearly 40 years - the last deeply modernized "veterans" of the Jagdgeschwader 71 (JG 71) Richthofen regiment went into retirement in the summer of 2013. 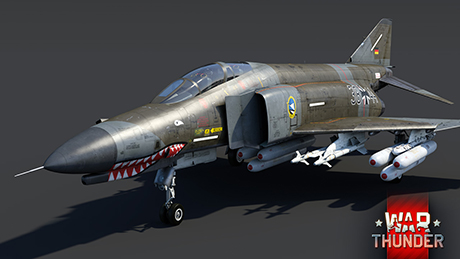 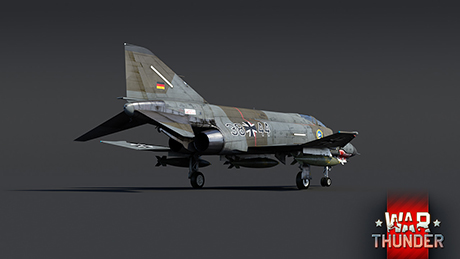 The German version of the iconic American F-4F Phantom II jet fighter will be one of the most desired rewards in the April crafting event in War Thunder. The F-4F is an early version of the fighter; in one of the upcoming major updates, the Luftwaffe will also receive a representative of the “Phantom II” series in the regular tech tree. The early F-4F Phantom II can be yours for free in the near future!

Despite the fact that the export version of the avionics of the F-4F does not have modes designed to work with the air-to-surface missiles, it is still a great high-rank fighter and one of the best aircraft in the game. So, the German "Phantom II'' in a nutshell has a maximum speed of Mach 2 (at high altitudes), an excellent selection of available armament, and a unique evil grin camouflage on its nose. A pilot is free to choose from a variety of weapons: bombs up to 2,000 pounds, Mighty Mouse and Zuni rockets, 20mm Vulcan gunpods and three modifications of the deadly Sidewinder air-to-air missiles: AIM-9B FGW-2, AIM-9E and AIM-9J.

The top-tier German "Phantom" will be yours for completing the big April crafting event. More details are coming, stay tuned!

Commenting is no longer available for this news
Rules
Spit98
155

AIM-9J ohh RLY how when GER never even bought AIM-9Js? So You give F-4F AAMs it NEVER had but FGR and FG can't get AIM-9G even tho they used it extensively for most of their service life. gErMaNy SuFfErS

I agree that gefmany shouldn't have the Aim-9 J, but something that would level the playing field would be giving the americans the actual performance on their missiles. I don't understand why American jets and tanks always suffer oh wait. It's because gaijin always gives them the worst version of their aircraft.

Nuggets_r_tasty, i swear, most missiles are badly modeled. Yak-38M and Su-17M2 should not have R-60s. they had R-60Ms irl. Also the R-60 has the wrong range (its range should be shorter like real life) and wrong overload (it does 45G irl, not 30 like ingame. I can provide sources on the G overload if you want)

Thry should listen to the community like thry did with the SK105 and remove them.

Dozer15, the british premium harrier also got missiles it never had.

So lets get this straight. German F-4F can have missiles it *COULD* carry, but British Phantom's can't have their AIM-9G's which they historically did carry. Or rather, the Mig-21PFM that could carry K-13M or R-60's but didn't in Russian service. Double standards ?

You see. Unless you play Germany you don't get special treatment.

Conte_Baracca, Does not everyone know by now that US, USSR, and Germany are the nations to play in this game? One of them is always having a good time and drawing the Meta players over to them.

The same goes for french stuff, MB 155, F-100D without bombs, Preseries performances on Mysteres and more. This is the most dyshonest company i've ever seen, twisting their way of thinking every patch. We don't have roadmaps or clear answers on core issues because they don't know where they are going. They are just following whales desires for more cashgrab and baits. if they listen only Shitstorms, lets do one hey ?

Why is this getting AIM-9Es and AIM-9Js it never carried in real life?

The F-4F flight manual confirms it was capable of carrying them. As such, loadouts are considered based on the capabilities of the aircraft, what they could actually carry (backed by sources) and its position in game. In this case, the aircraft could carry them (as confirmed by the manual) and as it lacks some of the main features of the other Phantoms (Sparrows, Countermeasures etc) it makes the most sense.

Smin1080p, German armoury reports confirm that it only ever had in inventory and only ever carried, AIM 9Bs and AIM 9Ls, bombs and Mavericks. I have a friend who will be making an official bug reports to correct this as the vehicle was only intended to engage ground targets

OrangetailGaming, theortically it could but the west luftwaffe only ever used (and only ever had in inventory/weapon stores) Bs and Ls

Poor move on gaijins part this adding a highly sought after vehicle for the German tech tree as a limited time event vehicle with incorrect loadouts just to drive the FOMO even more.

As the blog explains, there will be an even better version (the late version) added to the standard tree. With regards to the missiles, the F-4F manual confirms the loadouts.

Smin1080p, Doesn't matter if it confirmed what I could carry just as other aircraft in game have manuals that confirm what it could carry but gaijin said no to them because they were never actually used this is the exact same scenario but instead your giving it loadouts it never actually fielded.

The Crafting events have always had a pernicious edge to them. This is just an even more pernicious decision.

The ICE variant is not what we plan for the tree right now. Simply a later version than the one in the event. None the less, the tree version will be the superior aircaft.

Smin1080p, First of all, the tech tree version being the superior aircraft I think is a very, VERY good idea. Second though, I'm still just recoiling in my seat, hysterically laughing at the fact that the F-4F Early is an event vehicle!

Really? THEY NEVER USED AIM-9J ON EARLY VERSION OF PHANTOM

Exactly, give them the 10g pulling missiles. Germany gets enough, if you want better missiles fly the mig.

Germany gets coddled as usual.