An experimental Soviet SPG SU-76D will be an award in the upcoming crafting event in War Thunder!

In the Soviet Union in the midst of the war, design teams from various industrial enterprises continued to work on new types of weapons. At the Gorky Automobile Plant, an initiative group of designers proposed a light tank destroyer design with a closed cabin and a diesel engine. In one of the iterations, the project turned to a vehicle with a low silhouette and an inclined arrangement of armor plates. It was assumed that the vehicle would be armed with 76 or 57mm guns. It was planned to install the modified hull carriage of the T-70 light tank as a chassis on the vehicle. The issue with a power plant remained unsolved though. There were two options: either using American-built GMC-71 diesel engines, which the Soviet Union received with lend-lease, or starting production on a domestic engine, similar to the American one.

The 76mm cannon, planned to be installed on the SPG, was no longer enough to destroy the latest models of German armored vehicles by the time the prototype was tested. This, as well as problems with fine-tuning of the domestic engine, became the reason for the closure of the SU-76D (D for "diesel") project. The second vehicle from this designer team, the SU-57B SPG, is already known by War Thunder tankers and has proven itself quite well in battles. We decided to add her older sister to the game! 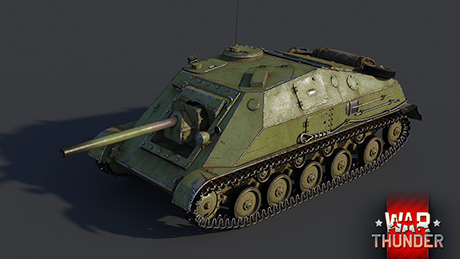 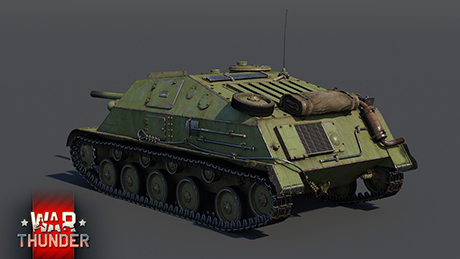 SU-76D is a premium low-rank tank destroyer that will be one of the prizes of the new crafting event in War Thunder. The idea of ​​creating this vehicle is very interesting and unusual for Soviet tank engineering - a light tank destroyer with the lowest profile possible, a closed cabin and an inclined arrangement of armor plates in the front projection. The same principles underlie the design of the excellent German Hetzer tank hunter, which, unlike Soviet vehicles, was produced in large numbers and proved to be effective in combat.

The SU-76D, built on the chassis of the T-70 light tank, has rather mediocre protection: even in the front projection, the self-propelled gun can be penetrated by almost all opponents, which is typical for most low-rank vehicles. However, the closed cabin will save the crew from machine guns of enemy anti-aircraft guns and aviation. The 76mm F-34 cannon has a range of shells from the early versions of T-34 tank with their versatile APHE rounds, and a barrel length useful for lower ranks, which ensures penetration in almost all enemies on the battlefield. The SU-76D's mobility is average - despite its lighter weight, the power of the diesel engine is not enough here, but on flat solid surfaces the self-propelled gun quickly develops a speed of up to 36 kph.

One of the main advantages of the SU-76D is its premium status, which will allow you to quickly research any Soviet armored vehicles of the I to III ranks and earn additional Silver Lions in battles.

The SU-76D is an interesting entry-level self-propelled gun with a good gun and premium status. You can get the new SPG in your hangar by completing simple tasks of the upcoming War Thunder April’s crafting event - stay tuned to our news!

Commenting is no longer available for this news
Rules
Salty_French_Boi
119

you guys don't listen when the entire community said "we hate those they suck please stop doing those" do you?

The whole community did not say this. We listen to feedback and also check how many participate in these events too. These type events are very popular too and lots of people do enjoy them. But we also understand they are not to everyone's tastes and that's why we run a variety of events all year round of various levels to have something for everyone.

I love crafting events, speak for yourself. They give me an opportunity to get GJNCOIN for only my time, and I buy camos, etc on the marketplace.

Suppiee, Same here, I've been running Premium account in the past 2 years exclusively on GJN earned by selling these vehicles on the Market. These events literally feed my WT account xD

Hopefully this event isn't as soul destroying as they usually are.. The battlepass has been great, really enjoyed the two seasons so far. But the last few years I've completely given up on these recipe things. They are so grindy and cruel. I hope this one isn't so unenjoyable.

Bro, this is Gaijin. We all know that this "event" will be another soul crushing scheme designed to milk players.

vTuro24, I thought that their EBR event was well managed.

Well at least we agree the Battle Pass is great.

OrangetailGaming, Was. Won't be buying another one next time until I see how far I get. Battle pass 1 was great, you could buy points from the store for GE if you didn't have the time to grind, but as they say, fool me once, shame on you, fool me twice, shame one me. It won't happen again. Rest assured...

Really cool prize and I'm happy to see it. Just hope we can get all the vehicles this time without using the market.

Cats drive this around :)

I'm going to hate playing against this thing. I know it. It's got the look of something that will be a sneaky little jerk.

Conte_Baracca, I'm so getting this.

hahahaha ahh so glad i quit this game. These stupid build'a'bear events are by far the worst.

And here you are, in a comment section of a game you quit playing.

Stona_WT, YUP! Exactly only because I get the stupid news in my steam feed. I played this game for years, biggest waste of time ever. I blame you guys, you ruined it for me, so thanks! Its been on a steady decline for years now. Just glad I got out when I did. My only regret is I didn't get out earlier.

Good... here we go! I am looking forward to the high tier reward vehicles!