The Ratel 90 is the fire support version of the Ratel family of South African wheeled ICVs, developed during the early 1970s for the SANDF. Soon, this deadly fast mover will join the ranks of the British ground forces tree as part of the brand new South African subtree, coming to War Thunder with the release of the next major update!

In the late 1960s, the South African military began changing its doctrine towards highly mobile warfare, embodied by small mechanized infantry units. The change in doctrine was necessitated when the military realized that heavy armor faced extreme difficulties operating in rural areas of the country. As a result, the army needed a new ICVnot only to ferry troops into battle but also to actively support them in the field. To that extent, a basic requirement for an ICV was formulated and a number of both domestic and well as foreign designs were evaluated.

The domestic Springfield-Büssing company developed a promising six-wheel ICVprototype, called the Buffel, constructed on the basis of a MAN truck. The further developed Buffel prototype was eventually selected for procurement and entered service with the military as the ‘Ratel’. Production of the Ratel began in the mid 1970s, after a limited initial batch of production vehicles successfully underwent testing. Being a family of fighting vehicles, the Ratel came in various modifications, including the base model armed with a 20 mm cannon, two mortar versions, a close fire support variant armed with a 90 mm gun, as well as a command and ATGM carrier modifications.

Ratels served in numerous conflicts since their first introduction in the mid 1970s, with nearly all of its active service taking place on the African continent. The Ratel 90 saw its first combat use in 1980 during the  South African Border War, where Ratel 90 anti-tank teams came face to face with T-54/55s on multiple occasions. By the end of production in 1993, some 1304 Ratels were produced across all variants. Due to its simplistic design and perfect fit for the dry climate of sub-Saharan Africa, the Ratel proved at home in the Middle East and north-west Africa. As a result, around a dozen more nations, excluding South Africa, still operate the Ratel ICV. 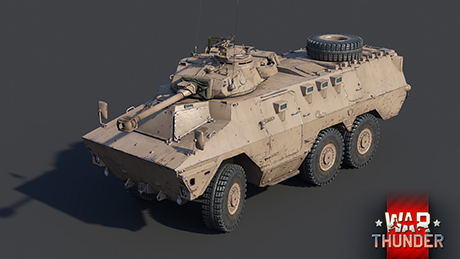 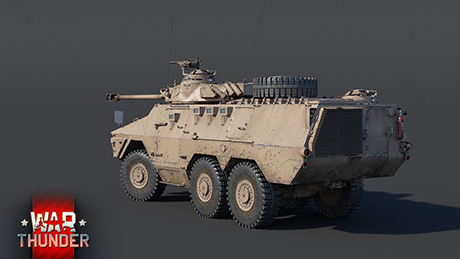 The Ratel 90, as its name already indicates, is primarily armed with a 90 mm GT-2 gun featuring favorable ballistic properties at short to medium ranges. Thanks to its good accuracy and rate of fire, the GT-2 cannon is ideally suited for accompanying the Ratel on its fast outflanking maneuvers to deliver a devastating blow to unsuspecting enemies. It’s worth noting that the GT-2 cannon can only fire chemical munitions at enemy targets. As such, aspiring commanders of this armoured car should carefully aim their shots, particularly at vehicles protected by more advanced armor types, in order to maximize the destructive potential of their rounds!

Apart from a punchy cannon, the Ratel 90 is also equipped with a sizable 282 horsepower diesel engine, allowing the vehicle to reach a top speed of 105 km/h under ideal conditions. On the other hand though, the Ratel 90 still remains a rather heavy vehicle, despite being a wheeled one. As such, the Ratel 90 comes in weighing 20.1 tons, resulting in the vehicle possessing a power-to-weight ratio of 14 hp/t. This rather mediocre power-to-weight ratio means that the Ratel 90 will only slowly get up to its top speed and may face some difficulties navigating extremely uneven terrain.

However, despite offering good mobility and firepower, the Ratel 90 succumbs to the same weakness found on virtually all vehicles of this type. Namely, the Ratel 90, with its up to 20 mm of steel armor plating, isn’t nearly as well protected as some of the other fighting vehicles at its rank. In effect, the vehicle’s armor protection is merely enough to keep the vehicle shielded from shrapnel and machine gun fire, while main guns from other tanks as well as autocannons from SPAAGs will make short work of the lightly protected Ratel 90. Therefore, tankers will have to rely on the vehicle’s mobility to keep themselves out of the enemy’s firing line and thus well out of harm’s way.

The Ratel 90 is joining the higher ranks of the British ground forces tree as part of the upcoming South African branch of vehicles, coming to the game with the release of the “Ixwa Strike” major update. In the meantime, be sure to stay tuned to the news as we keep you posted on all the upcoming new additions and features awaiting you in the next major War Thunder update. Until then, happy hunting tankers!

Commenting is no longer available for this news
Rules
BakerOne
21

Battlebus has entered the battlefield!

Please let this be a normal field trip

icemelter, With the snail, no way!

Can we get devblog about something unseen?

Like 100% functioning servers, New gamemode or a change in MM? These things are unseen since 2015.

yeah we already know the vehicles thanks to content creators. Please stop showing south african vehicles and start showing other vehicles! we already know what they are and how they perform

That's the problem of getting the hype-train started too soon. Should have waited another week with the Dev-Stream and Dev-Server. Now the Devblog season seems very lame because everything shown here is already known about

Look. Something almost as good as an Italian Armored Car. Almost.