The first in the line of American multirole fighters, the F-5A Freedom Fighter is entering service with Chinese pilots with the launch of the upcoming “Ixwa Strike” update.

In the mid-50’s, a group of specialists from the Northrop Corporation began developing a light multi-role short-range support fighter  on their own initiative that could take off and land on short runways. The idea did not receive much appreciation from the military authorities, as the main stake was then placed on high-tech expensive fighters, for which the length of the runway did not play a decisive role. However, within Northrop Corporation, the project continued to develop. While research, construction and testing of prototypes were going on, the strengthening of the NATO and SEATO alliances required the United States to supply a cheap multi-role fighter to allies.

This is where the work of the Northrop engineers came in handy. With minor modifications, the experimental aircraft went into production under the designation F-5A. Very easy to assemble and maintain, without modern navigation and guidance systems, the aircraft was able to carry a huge arsenal of suspended weaponry and effectively carry out missions to destroy various types of ground targets, as well as successfully participate in air battles, often against more expensive and advanced enemy aircraft.

The F-5A Freedom Fighter was first put in service by the Norwegian Air Force in 1964, later she was supplied to a large number of US allies and was actively used in many conflicts around the world, including Vietnam, the Iran-Iraq conflict and the War of Ogaden. 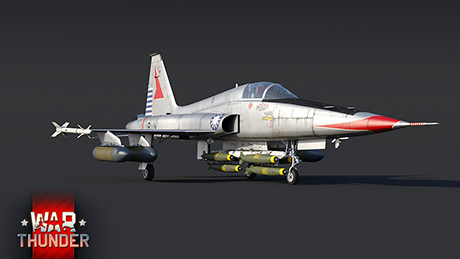 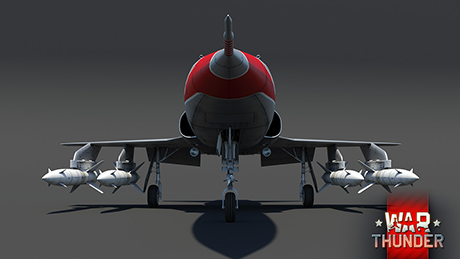 In our game, the F-5 Freedom Fighter series appears in the “Ixwa Strike'' update with the first serialy produced modification of the F-5A in Chinese service. These early versions of the F-5 were almost entirely exported to other countries; American pilots used them to a limited extent as trainers. Later, we will add more advanced F-5 modifications for both the US tech tree and other gaming nations.

The F-5A Freedom Fighter will be the new top of the line of American strike fighters for the Chinese Air Force. This small, very light aircraft has performance characteristics comparable to other fighters of its rank, but carries an incredible variety of outboard weapon sets. It has it all: 250 to 2000 lb bombs, Mighty Mouse rockets, Bullpup air-to-surface missiles, AIM-9P Sidewinder air-to-air missiles. It's great that all weapons are assembled into specialized and universal setups for literally any combat task.

That is, bombs, rockets, and guided missiles can be carried all at once in more than 20 combinations! As well as that, the aircraft has rapid-fire 20mm cannons, a very decent rate of climb and maximum speed, and is well controlled in flight, even with a significant payload on the pylons. The disadvantages of the F-5A include the complete absence of defensive systems - no radar warning system and no flares are provided.

So, the first representative of the glorious F-5 family will appear very soon together with the release of the War Thunder “Ixwa Strike'' update! The best attack aircraft in the Chinese tech tree and many more new units and features are coming soon, stay tuned to our news!

DiS nO vIgGen WaT tHe OoF!!

Type 10 WHERE? Germoney gets Leo 2PL from 2018 but Type 10 from 2010 can't be added? Those armor values are only predictions anyway and Japan needs Top Tier Tank with commander thermals!

As much as I want the type 10 badly, its not coming for a while, There is basically no info on it, the reason im guessing the 2pl was added its just a leo2 with add on armour and they can work out the weight of the 2PL and do some maths using its weight to work out the composite weight then apply some comparison to find out its armour value.

GrubbyClubby, There the same amount of info available for the Type 10 as there is for every other modern day MBT. Size, Weight, Gun, Engine, Transmission, the only unknown facts are armor, armor composition, and FCS, but that's the same for all current MBTs in the game, even the ones from the '80s. So this is not really an excuse, armor is always an estimate.

You misread the sentence. "The F-5A Freedom Fighter will be the new top of the line of American strike fighters for the Chinese Air Force." China has a line of American fighters in its tree, and the F-5A will be at the top. Furthermore, they say the F-5A variant wasn't really used by the US.

AWC, Correction the F-5C is a modification of the F-5A that added a fuel probe and a few avionics upgrades which mean nothing ingame so they are just restricting which nations get it so people grind the tree which was a mistake to even add

WHERE IS AMERICAN VERSION GAIJIN ???

No doubt it should be in the US tree aswell. But it will be at some point and thats fine. Always nice to see minor nations getting some attention and something special.

KingOfGoblins, > Taiwan is not China Technically it is; the "Republic of China" (the government of Taiwan) considers itself to be Chinese. It's kind of like East versus West Germany during the Cold War, both consider themselves to be "Chinese" or "German" even if they disagree with the government of the other part of China or Germany.

No it's not fine, it's the usual *other country gets better versions of american vehicles before the US tree gets one at all* that gaijin loves to do constantly.

CheckYoPrivilege, You're acting like America doesn't have enough jets to play with while china has barely anything. You're really salty that china gets something it actually used in combat while America will get it later on? You're like a child that says he wants candy now and can't wait till he gets home to eat it.

Can we get the swiss F-5 for France or Sweden? They need it.

If anything, it would make more sense for Sweden to get the Norwegian F-5.

Why do you want a jet that was never used by France or Sweden to be added to them when they have perfectly good jets of there own to be added?