We present to you a new type of aircraft in War Thunder - an aircraft with variable sweep wings! We are going to discuss the first such aircraft today, the Soviet Su-17M2 jet fighter-bomber that is going to appear in the game with the release of the next major update “Ixwa Strike”.

During the further development of the Su-7B project and the tendency of fighter-bomber aviation to increase the combat mass of an aircraft, the problem of difficult takeoff and landing on shorter runways became apparent. However, a massive supersonic bomb with an ability to make a missile strike as well was all too an alluring military power to simply give up! The TsAGI research institution studied the prospects for a scheme with a variable sweep-wing, which was able to facilitate takeoff and landing of a heavy aircraft at subsonic speeds. Studies have shown that when using the classical variable sweep scheme, the desired effect will not be achieved, even to the contrary, the performance characteristics will significantly decrease. However, if only part of the wing is designed to ‘swing’, take-off and landing will become noticeably easier, and flight characteristics at subsonic speeds will increase greatly.

This is how the project of an experimental prototype of the S-22I appeared: a sweep-wing fighter-bomber made on the basis of Su-7BM. After successful tests, the fighter-bomber designated Su-17 was adopted for mass production. At the beginning of the 70’s, the Su-17M modification appeared, a little later supplemented by the Su-17M2 modification, in which the most contemporary developments at that time were combined, including new navigation systems and an aiming system with a laser rangefinder, featuring a total payload of 4,000 kg. Serial production of the Su-17M2 began in 1974, a total of 152 units of this modification were produced. 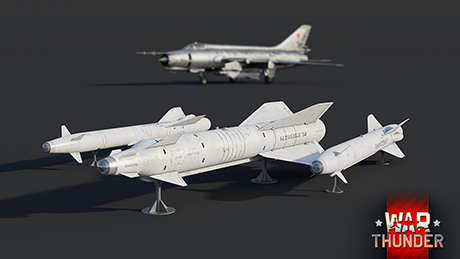 So, let’s meet an aircraft with variable swept-wings in War Thunder. This is a fairly popular technical solution in combat aircraft with a high take-off weight, which should have good performance characteristics both at subsonic and at supersonic speeds. The first such aircraft in our game is the Soviet Su-17M2 fighter-bomber, the successor to one of the best attack aircraft in the game, the Su-7BKL. The maximum take-off weight of this aircraft exceeds 18 tons, so the sweep-wing is almost the only solution that allows you to achieve the take-off and landing characteristics necessary for this combat aircraft. Only the end sections of the wings are moveable here, while the root area stays fixed. Thus, the increased wing area and additional flaps on the swinging surfaces facilitate takeoff and landing, and also give better controllability at subsonic speeds. After reaching sonic speed, the moveable parts of the wing surfaces are moved back, contributing to the ability to gain and maintain high speeds.

At the time of release, the Su-17M2 will become the top attack aircraft in the USSR aviation research tree and represents a further development of the Sukhoi jet fighter line. Despite its large mass, the variable sweep of the wing makes it sufficiently maneuverable at low speeds and fast enough for a top-tier attack aircraft - at altitude and with minimal load, the aircraft can reach speeds of almost Mach 2. Compared to the Su-7BKL, defensive capabilities have increased due to an installed radar warning system.The offensive armament remains the same - a pair of 30mm autocannons, but the suspended weaponry has increased.

The payload of the Su-17M2 is 4,000 kg, amongst other things, it is possible to install cannon pods, bombs of 100 to 500 kg calibres, S-5, S-8, S-3 or S-24 rockets, as well as guided missiles: the R-60 air-to-air; as well as Kh-23M, Kh-25 and Kh-29L air to surface class missiles. The last two are worth looking at in detail. This was a further development of the Kh-23M missiles, already familiar to the masters of air combat from the Yak-38 series, but a laser seeker is used here instead of radar. The Kh-25 has a high-explosive fragmentation warhead weighing 136 kg, the Kh-29L has an armor-piercing high-explosive warhead weighing 317 kg. The launch range of these missiles is greater than that of the Kh-23M, but when the missiles are guided to the target, the tank's laser warning system may alert a crew to the attack.

The Su-17M2 opens a new page in War Thunder's combat aviation! Stay tuned for the next big update “Ixwa Strike” to find out what else is coming soon!

Commenting is no longer available for this news
Rules
EpicBlitzkrieg87
26

Hopefully this opens the door to the Su-17M3 or M4 in the future with flares and the MiG-23 :) inb4 some people start comparing that to the F-14..

I still don't know why they chose the Su-17M2. An M3 or M4 would have been more comparable to the A-7D, as they could carry more air to ground missiles and had flares. The Su-17M4 would even have F&F missiles in the Kh-29T, but I imagine we'll see the jets in the near future.

LeMemeAesthetic, I think they just selected the M2 because the M4 variant was coming in future updates. Just like the Su-7 scenario where they added the B first and then the BKL.

I'm suprised we didn't see the F111 Ardvark too. Technically the F111 was the first.

Dozer15, Ill think they would come. When not in this then in one later Patch. Also F14 and others.

except not only he said nothing, but i dont see a reason why cant certain players have an opinion about a vehicle in a video game. thats pretty dumb bro

netanelyat, He will allways be the guy that cried for the mirage

What do you know?

Dozer15, That you'll have something to say, as always.

"sound mods wont get banned in RB and SB" do you have a source on this please?

Lengthoid, They said it on the dev server preliminary patch notes

The F8 was in the dev server yesterday

DeutscheDog, how the hell am i supposed to know when the dev server launches? (legit question)

I think it's coming. I've seen a few YouTubers say that it is, and Dollar showed a pic of the Italian naval tree, and the Etna was there.

Dozer15, It is Glorious Soviet!

Hopefully this means that for the F-8 Crusader the variable-incidence wing will be modeled :)

The F-8 was kind of rushed to the dev. The variable-incidence wing wasn't modelled, the flight model was very wrong (they slapped together the engine of the F3H and the flight model of the A-7D), and secondary weapons weren't even available to use. The seriously rushed it to the dev, and I'm hoping they have the time to properly finish it before the update drops.

dude it already was in the dev server. Y'all not keeping up or what.

Nomadic_Warrior, no idk how to keep up i cant find where it announces the devserver launch

I hope we see the Su-17 variant for Germany as well, I believe it was designated as Su-22 (export variant of Su-17).

Now the 1st swing wing technical demonstrator has been implemented into the game it allows more to follow in future patches. In recent War Thunder fashion the next swing wing aircraft that could be introduced most widely across multiple nations is the Panavia Tornado.Going straight into Italy, Germany & Great Britain. Hopefully coming in a patch soon..

Tornado would be wonderful to see, but it is a bit advanced...

I am very much so looking forwared to this plane, but does this maen that we soon will get the famous F14

dude it is 4th gen what stuff are you on that you think that will come this year, F-111 at best and that has an insane bombload so I even doubt that

KingOfGoblins, F111 is doable. The USA just made everything with huge secondary capacity, kinda is what it is.

EpicBlitzkrieg87, To clarify, both the F-14 and F-111 are 3rd gen(thats what swingwing is), the F-111B was the only F-111 that could mount radar aa missiles and it was only a prototype. They would not do very well against a 4th gen like F-15.