Shimakaze was an experimental Japanese destroyer, incorporating an extremely powerful high-performance propulsion system and the heaviest torpedo armament of any WWII destroyer. Soon, this deadly and nimble vessel will become available to eager captains in the game as a brand new squadron vehicle!

Shimakaze was ordered in 1939 as a prototype vessel of the future Type C destroyers, of which 16 were planned for construction. Shimakaze’s basic design was based on that of the Kagerō destroyer, with Shimakaze incorporating a new high-performance turbine and three quintuple 61cm torpedo launchers as well as having slightly larger dimensions and displacement as a result.

Laid down in August 1941, Shimakaze was completed in May 1943, being assigned to the IJN 1st Fleet upon her commissioning. Shimakaze’s early service career was marked by taking part in the evacuation of Japanese troops from the Aleutian Islands in July and August as well as escort duties until the end of the year and into early 1944.

After undergoing brief refitting in March 1944, Shimakaze escorted battleship Musashi and heavy cruiser Maya from Kure to Manila. Subsequently, Shimakaze was once again ordered to Kure to undergo another refit, in which her anti-air armament was increased.

In October 1944, Shimakaze formally took part in the Battle of Leyte Gulf, although she didn’t see any action as the ship was loaded with survivors picked up from the sunken Musashi and Maya. In November, Shimakaze was assigned to escort a troop convoy from Manila to Ormoc, later being attacked by American aircraft in the Battle of Ormoc Bay. Shimakaze was severely damaged during the battle, only to explode and sink several hours later. 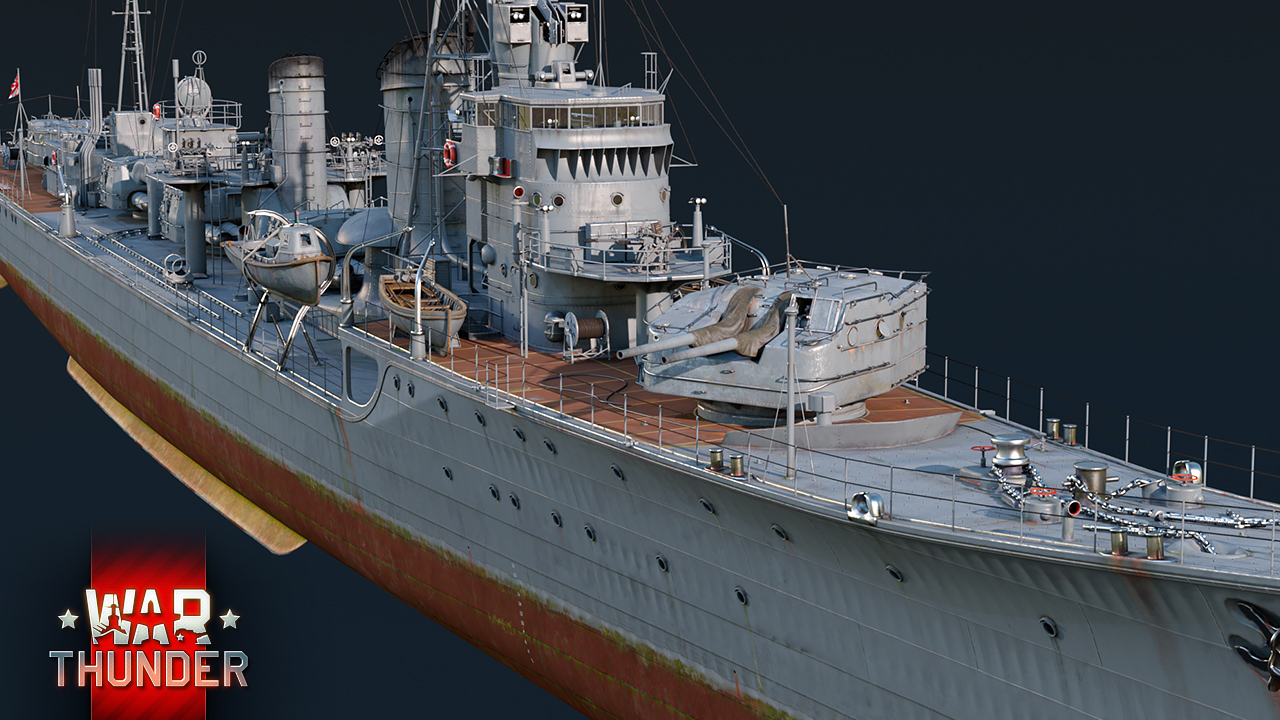 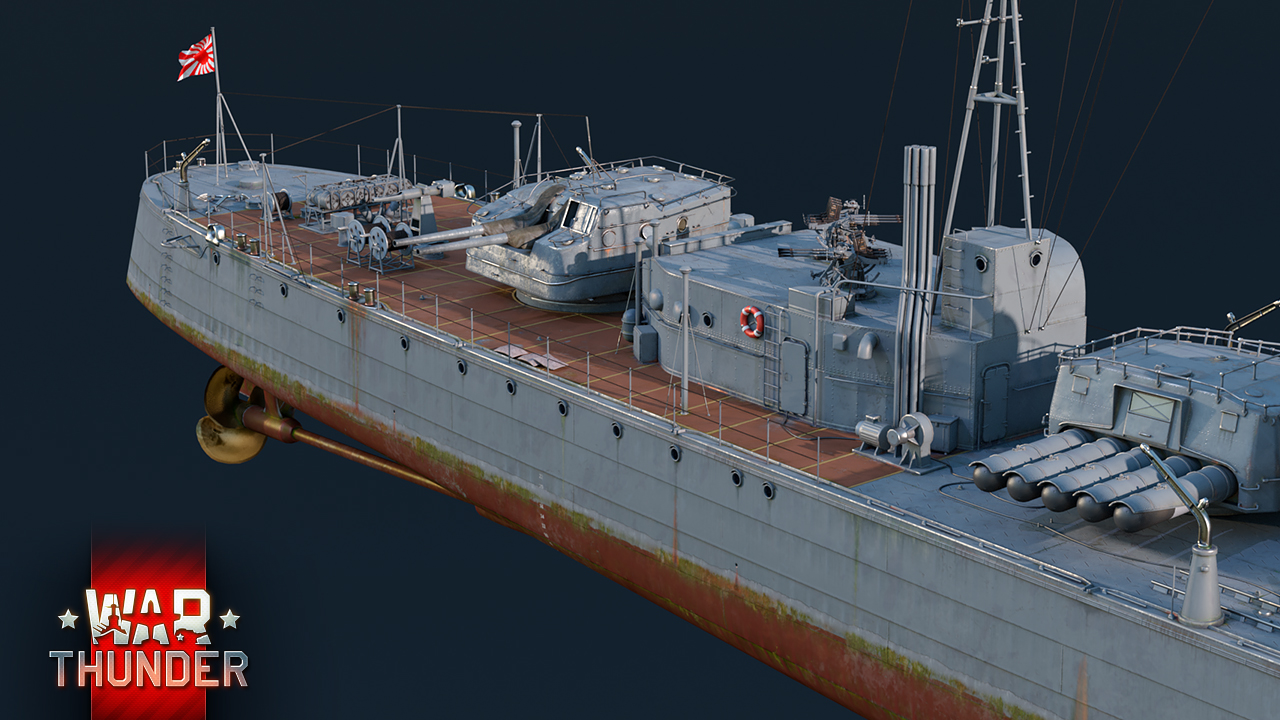 In War Thunder, Shimakaze will join the ranks of squadron vehicles. At first glance, Shimakaze appears to be a typical late Japanese destroyer design, placing emphasis on mobility and torpedo firepower. However, what makes Shimakaze stand out from other Japanese destroyers is the fact that it takes this signature design characteristic and takes it to a whole new level!

Let’s start with similarities first; Shimakaze, like many other Japanese destroyers, is primarily armed with two twin 5’’ (127 mm) turrets, which can both be used against surface as well as aerial targets. Complementing these in the AA role are a total of 14 25mm cannons, split down into one twin and four triple turrets. In this regard, Shimakaze will feel like a regular Japanese destroyer, at least on a surface level.

Going below surface level however, it’s a much different story. Shimakaze sports the largest and deadliest torpedo armament of any destroyer currently in War Thunder and among the largest torpedo armaments of any WWII-era destroyer historically speaking. Having access to 3 quintuple (yes, you read that correctly - that’s 15 torpedo tubes) 610 mm torpedo launchers, launching the infamous Type 93 ‘Long Lance’ torpedo, one could easily make the claim that Shimakaze’s primary armament aren’t her deck guns, but her torpedoes! As a result, Shimakaze will be a true force to be reckoned with, particularly in Enduring Confrontation battles where her fast, long range torpedoes will truly show their full potential. But be aware - Shimakaze doesn’t carry any additional spare torpedoes, meaning captains will only have a single salvo at their disposal throughout an engagement!

However, a massive torpedo arsenal isn’t the only thing which sets Shimakaze apart from other destroyers - her superb mobility also plays a part in this. Namely, being powered by an experimental, high-performance steam turbine propulsion system, generating upwards of 79,000 horsepower, Shimakaze can reach an astonishing top speed of up to 40.9 kts (75.7 km/h)! This makes her the second fastest destroyer in the game, second only to the Soviet Tashkent. However, in combination with her smaller silhouette and generous torpedo armament, Shimakaze may end up being the deadlier destroyer in the long run.

As a result, Shimakaze is not only a worthy collectors vessel, but also a very desirable addition to any captain’s port with a keen interest in high-speed torpedo warfare. Similarly to other squadron vehicles, Shimakaze can be researched for activity in random battles for squadron players, or purchased for Golden Eagles for everyone else.

Shimakaze will become available in one of the upcoming server updates, so stay tuned!

Just as an update based on some of the feedback we have received. The developers are currently re-reviewing all of our historical sources and material on the ship to ensure we have her in her correct configuration. Should any changes be necessary, they will be made. Photographs and primary material around this sort of thing is extreamly scarce and not as well backed up as other ships for example. But we will do our best to make her as accurate as can be.

I understand you're trying to cover at the moment but material on Shimakaze isn't really all that scarce, there are plenty of photographs, stored material and even her wreck has been found and documented. Anyone with a basic knowledge of naval history can tell this is wrong and it's honestly a really bad show again from Gaijin within a week. I would recommend you re-review the quality assurance within Gaijin instead of make up excuses for blatant mistakes and low effort like this. Disappointed.

Shiraumere, Primary sources and period data (that we always try to use above all else) is not exactly plentiful on ships like this. Indeed there are many 3rd party and beyond sources which are always taken into account too. But ships by there nature are hugely complicated both from a development and modeling perspective. Mistakes can happen when creating vehicles and when they do, we will always put them right. Our goal with all vehicles is to make them as accurate as possible. As I said, its being investigated by the developers at this moment. When we are able to be more specific on the outcome, we will of course share the news.

Despite I would love to thank you, the developers, wholeheartedly for caring about the historical accuracy after feedback, I must point out that the data is not as scarce as you may think. There are plenty of sources available out there for a minimal cost and requirement of knowing Japanese. This time, damage control might be under control but in all seriousness, quality assurance within Gaijin needs to be checked thoroughly. Every time a Japanese vehicle hits War Thunder, we always face this.

Yikus_Maximus, The problem is that information may only be found in certain parts of the world, and not in other parts of the world.... that is where this community can help in cases like this, since we have members from all over the world that can help to fill in the ships life from construction in 41, launch in 42, any and all refits or upgrades up to 44/sinking that prove she had 3 turrets during the entire lifetime of the vessel o7

Even in her 1944 refit, Shimakaze retained 3 turret configuration. You can clearly see this in a picture taken by USN aircraft in 11 November 1944 of Shimakaze. Shimakaze is in line with Yugumo-class DDs and therefore they retained their 3 mount configuration without having to sacrifice a mount for additional 25mm mounts due to having HA gun mounts of Type 3 model. Unless whole internet and the literal picture is proven wrong by magical documents, this is completely wrong.

The developers are currently re-reviewing all of our historical sources and material on the ship to ensure we have her in her correct configuration. Should any changes be necessary, they will be made. Info on this ship (particularly from the period) is very scares, but we want to make sure its as accurate as can be. As soon as we have some more news, we will update things :)

Smin1080p, Smin that's just a excuse for saying you guys cocked up. there's legit a flippin picture of Shimakaze with 3 turrets. In fact it would go against 1940 japan doctrine for there DDs to not HAVE 3 turrets. Armament: As Built: 6 × 12.7 cm Type 3/50 cal dual-purpose guns (3x2) before Early 1944 Refit: 6 × 12.7 cm Type 3/50 cal dual-purpose guns (3x2) after. https://upload.wikimedia.org/wikipedia/commons/a/a4/Shimakaze.jpg The US made sure to write that down about the ships they engaged

She was even sunk in her 3 turret configuration. It is really weird how they had come to this conclusion...

Uh Hum, Not To Be All So Pessimistic About My Addition But... Where's My Third Turret??

We currently have some technical matters that are preventing its return. As soon as its possible, it will.

Smin1080p, Will we see a different US ground squadron vehicle? I'm just wondering because the M901 kinda trash, and I got a bit jealous of the BMP2-M, if there could be a squadron variant of the M3 Bradley I would love that, but I'm kinda dreaming right now, so I'm not expecting much. I give you and Gaijin lots of love to your hard working into War Thunder

So Gaijin, "armed with twin 127mm turrets like most Japanese destroyers" is an amazing inaccuracy. Most of them had 6 guns, 1 front turret, 2 rear. In both Shimakaze's refits she maintained her triple turret configuration with the configuration MOST JAPANESE LATE WAR DESTROYERS USED, 1 front, 2 rear. I don't know who made this model and approved this to be posted but I'd recommend you find someone else to do this. First the Somua SM meme and now this. You really have stopped caring haven't you.

Dude holy cow relax. Its a simple mistake that they're looking into

HIFLY [email protected], it's a mistake they shouldn't have been able to make to begin with. All the sources, pictures, and details from men who sunk her all said. 3 turrets.

If they changed the 2 guns per turret to 3 then that might be an easier fix :P

Gunship, You hurt my soul

Which of your employees just carried a 32 ton turret home?

no one will challenge us now on the high way!

Pacifica, you're not clever. Being dismissive about this big a mistake on so many production levels is very weak...but your jingoistic loyalty to gaijin is readily apparent on their official forum. Hardly surprising, but the mere mention of your name is enough to prejudice most members with any historical interest, your ignorance is well documented.

Why does she represented in-game with only two turrets?

Didn't Shimakaze always have 3 127mm DP turrets? From what year is this retrofit of it?

She never lost any turrets. The ship we see here is wrong it should have 3 turrets.

Uhh i don't recall the Shimakaze losing a turret it should have three turrets.

she didn't lose it, her wreck was found with 3

Where is the third turret? Literally every account of the ship says it has 3, and even the wreck has 3. Why did you make up a ship?