The Sea Hawk is the first jet-powered aircraft developed by the well-known Hawker company during the 1940s, which saw extensive service with several nation’s armed forces. In the upcoming update 1.87, we’re planning to introduce one of the last modifications of the Sea Hawk to War Thunder. Pilots, meet the Sea Hawk FGA.6!

Briefly: One of the first British jet-powered naval aircraft, specialized for the ground attack role.

Already by the end of WW2, Hawker began working on their first jet-propelled aircraft as the new jet propulsion technology became available. As a basis for their new aircraft, they took the Hawker Fury and began adapting it to house a turbojet engine. The project received the designation P.1035..

As work went on, the attention the project garnered initially from the Air Ministry and the Admiralty was rather low and eventually dropped completely, forcing Hawker to continue development of the aircraft under a private venture. During the development process, the initial design of the aircraft underwent significant changes and the resulting version was designated as P.1040.

However, as Hawker’s aircraft offered good range, the Navy ordered three prototypes to be built in May 1946 and subsequently put through evaluation. Testing and tweaking of the design continued throughout the late 1940s until the first production orders for the aircraft, dubbed Sea Hawk, were received in November 1949.

The first Sea Hawks entered service with the FAA in 1953, with the remaining over 500 machines entering service by the mid 1950s. The Sea Hawk’s service life is primarily marked by their extensive use during the Suez Crisis in the late 1950s, where they successfully proved themselves.

As one of the last modifications of the type, the Sea Hawk FGA.6 was developed to incorporate changes from the previous FB.3 and FGA.4 ground attack variants and combine them with the new Rolls-Royce Nene Mk.103 engine which provided a greater power output.

In the early 1960s the British Navy almost completely abandoned the use of Sea Hawk and a handful vehicles being used in a limited number of secondary roles until the end of the decade. However, the aircraft was still in service by some countries like West Germany, the Netherlands and India. In fact, India continued to operate Sea Hawks well into the 1980s! 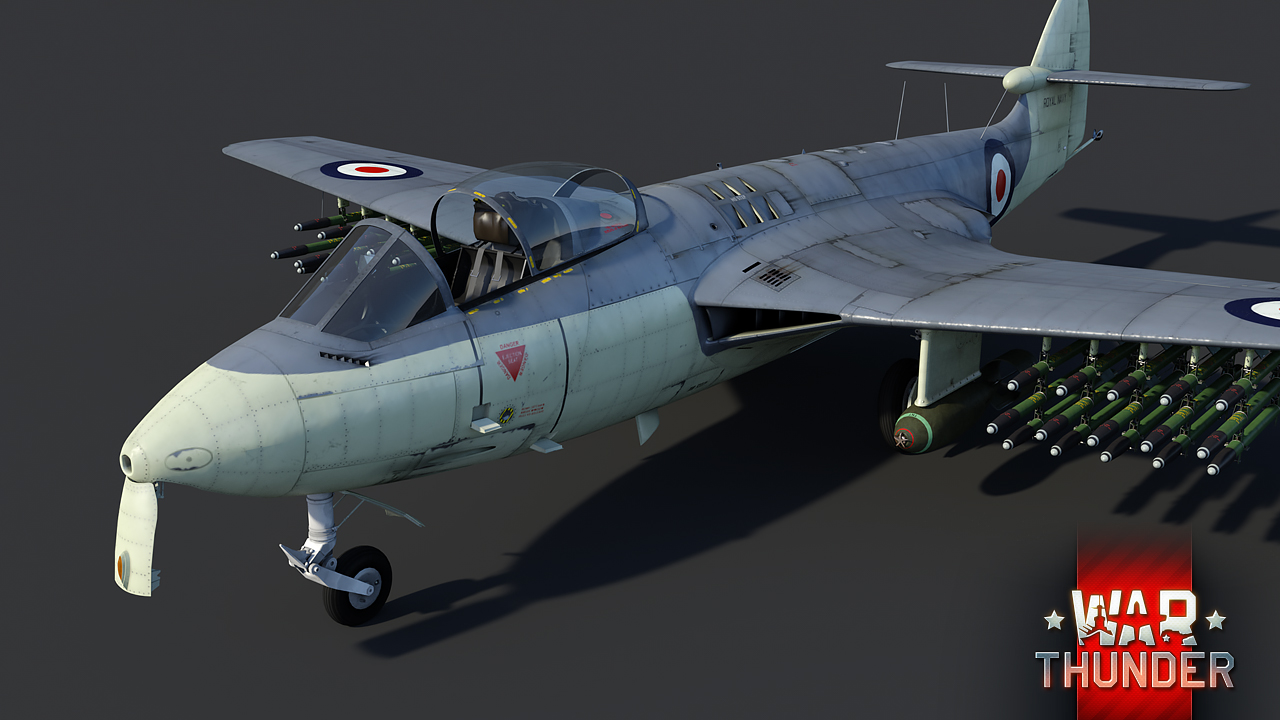 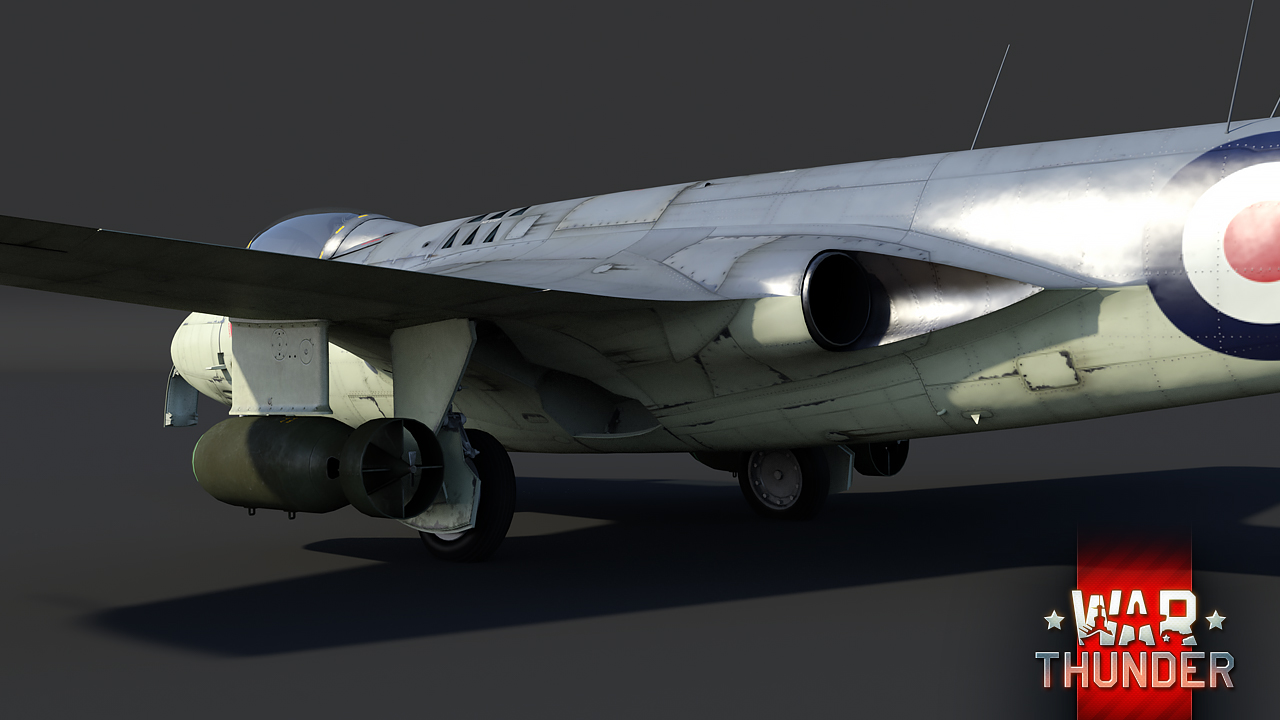 In War Thunder, the Sea Hawk FGA.6 will be a new addition, available to all pilots at rank V of the British aviation tree, coming to the game with the upcoming update 1.87. Offering a wide array of secondary armament options, pilots will be best off using the Sea Hawk in its intended ground attacker role, making it a suitable choice for high tier combined battles.

Being a part of Britain’s first generation of jet-powered aircraft, pilots should approach the Sea Hawk with relatively modest expectations, at least as far as flight performance is concerned. Powered by the Rolls-Royce Nene Mk.103 turbojet engine, producing roughly 23 kN of thrust, the Sea Hawk FGA.6 is able to reach a top speed of 599 mph (964 km/h) at sea level. 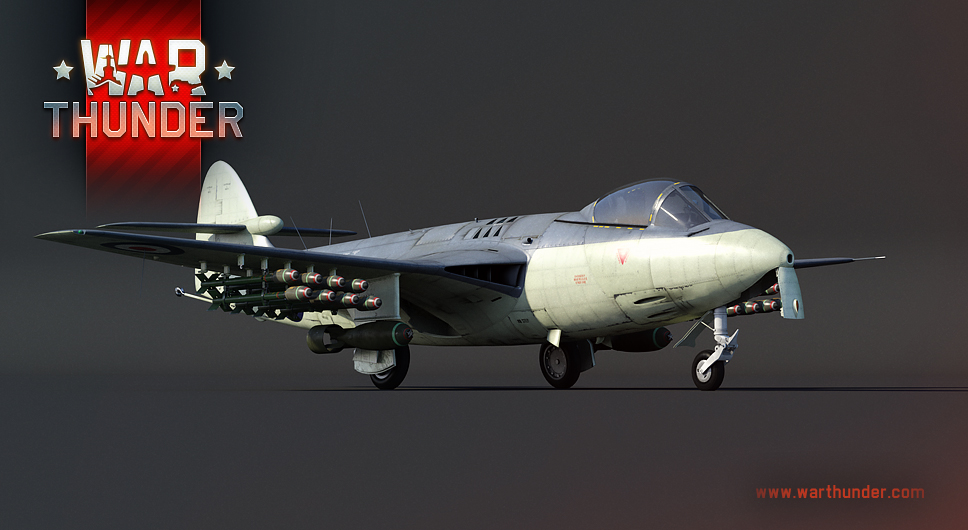 While the Sea Hawk FGA.6 still remains more than capable of contesting the airspace above a battlefield, pilots will quickly find out that the area in which the aircraft truly shows its full potential is ground attack.

Fitted with a total of 12 underwing hardpoints, the Sea Hawk FGA.6 is able to carry an impressive array of secondary weaponry, ranging from unguided rockets to bombs (500 - 1000 lbs). Depending on the loadout and individual skill of the pilot, the Sea Hawk FGA.6 can easily take out multiple targets in one sortie, before needing to head back to the airfield for rearming.

The Sea Hawk FGA.6 will become available to all pilots and fans of British aviation with the release of the upcoming War Thunder update 1.87 - be sure to give it a try! In the meantime, stay tuned for more news on the latest developments regarding War Thunder’s next major update. Until then, happy hunting pilots!

Commenting is no longer available for this news
Rules
rawrkash
7

Gijin we NEED surface to air missiles. also...I wouldnt mind a su-25 frogfoot. The il-28 is so fragile.

I would! It's annoying getting revenge bombed by P47's in T5/T6 as is. A frogfoot would only make it worse.

Dms110, If your worst nightmare in T5-T6 is a 4.3 fighter bomber you know something is wrong.

C'mon just give the helicopter for UK, japan, frence and italy

with out doing a UH-1 spam do theyy have enought types to make a tec tree?

Fix the game before you add more top tier junk.

Adding these intermediate aircraft and tanks is exactly what the game needs to fix it.

Could you shut up? please? more vehicles do mean decompressed BR's which are a benefit, also Britain needs a ground attack plane.

scorplion, I don't see them decompressing the BRs ANY time soon, and until they do you can't pretend what Gajin is doing is good for the game.

Gaijin doesn´t care about us tankers, they are only adding aircraft recently ... boo hoo You get my point

Completely ignoring the announcement of the CR2 and Rank VII... Unless you're joking of course, humour and sarcasm is hard to convey in the text medium.

I'm almost to the point of not reading comments. I dont 7nderstand how so many people cast negative remarks. Stop playing the game if you are so agitated with the new content.

Devblog on a Monday? Is that even allowed? :) The a good addition to the UK tree. They don't really have any good cas at top tier.

And still wont when this is released...