Interesting: The ship were used to carry the royal family of Luxembourg, who had escaped from Nazi occupation in their country.

USS Trenton is one of the ten American Omaha-class light cruisers constructed during the interwar period and will be among the first light cruisers to set sail under the banner of the U.S. Navy in the upcoming closed testing for War Thunder’s naval battles.

In the early 1900s leading up to The Great War, conflicting views and opinions on cruiser design among the U.S. Navy’s top brass led to not a single new vessel of this class being laid down. With the outbreak of hostilities in Europe in 1914 and the later involvement of American forces in the conflict, the U.S. Navy had every opportunity to gather the needed experience for creating a new cruiser design.

Thus, during WW1, numerous design propositions for new cruiser variants and subclasses were developed and assessed. In the end, two designs stood out from the rest; a light cruiser with a displacement of up to 8,000 tons and a heavier battlecruiser weighing up to 46,000 tons. The former of the two designs resulted in the creation of the Omaha-class light cruisers. Despite receiving the Congress’ approval in 1916, the Omaha-class cruisers weren’t put into production before more than two years worth of significant redesigning was done to the ship.

The lead ship of the class, USS Omaha, was laid down in December 1918 followed by 9 further ships of the class seeing completion by 1924. Among her sister ships was also USS Trenton (CL-11), the 8th ship of the class, launched in spring 1923. Trenton, like many American warships of the time, travelled a lot around the globe prior to the outbreak of WW2. She frequently took part in fleet exercises, patrols and maneuvers in the Atlantic and Pacific, whilst also paying visits to several Mediterranean ports. During the Spanish Civil War, Trenton was also involved in evacuating American citizens from the country as part of a smaller squadron.

During WW2, Trenton and her sister ships were already starting to show their age despite being upgraded several times. Therefore, ships of this class were primarily relegated to theaters where enemy opposition was estimated to be minimal and were assigned with less vital missions such as patrol duties and occasional shoreline bombardements. As such, no Omaha-class cruiser was ever lost in combat, though some were severely damaged, such as USS Raleigh during the Pearl Harbor raid. In the end, all ships of the Omaha-class were decommissioned after the end of WW2 and were subsequently sold for scrap by the late 1940s. 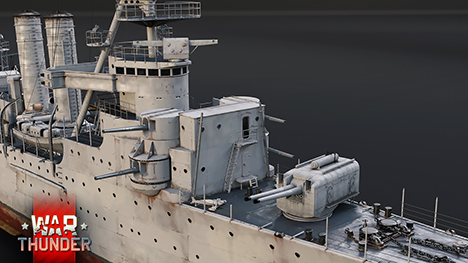 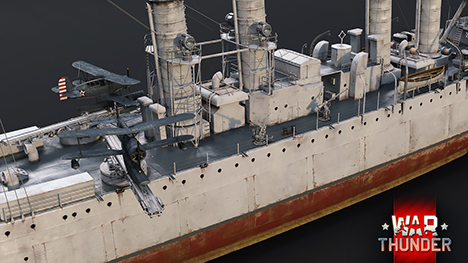 The USS Trenton will be the first light cruiser available for research to aspiring U.S. Navy captains in War Thunder’s upcoming naval closed beta testing. Because Omaha class cruisers were no strangers to regular upgrading during their service life, this meant that there was a number of versions of the USS Trenton that could be added to the game. In the end, we have decided to introduce an intermediate version of the USS Trenton from the 1930s, as its performance is comparative to that of other ships of this class already present in the game.

In comparison to the German Emden cruiser which we’ve discussed in one of our previous development blogs, the USS Trenton is a larger and heavier ship, sporting better firepower and protection at the cost of combat endurance and AAA capability. Being armed with ten 6’’ (152mm) main battery cannons, backed up by an additional four 3’’ (76.2mm) heavy AA cannons, the Trenton confidently takes the title of most heavily armed light cruiser in War Thunder to date. In addition to the fearsome primary and secondary armament, the Trenton is also equipped with two triple 533mm torpedo launcher, located on either side of the ship’s waist. 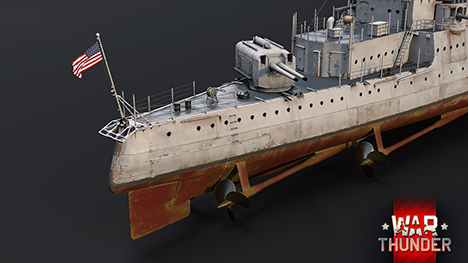 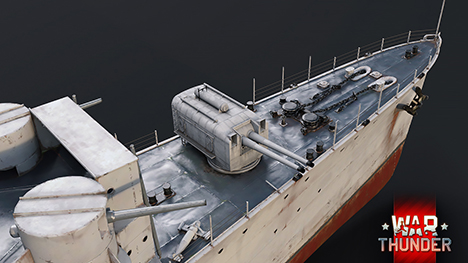 Manning all this firepower is a crew consisting of 458 sailors. While this may be significantly less than the Emden’s crewcount, it’s worth pointing out that the Trenton features much better belt armor, going up 76mm, as well as deck armour reaching thicknesses of up to 38mm at its strongest. However, being armed with only two quadruple 1.1’ anti-air cannons, means that the Trenton is somewhat vulnerable to attacks from the air. This means that future captains of the Trenton will not only have to rely more on anti-air support from allied ships, but also utilize their superior speed of 35 knots (65 km/h) and agility to present themselves as difficult of a target as possible for pilots looking for easy prey.

All in all, the USS Trenton is a powerful yet well-rounded warship. Striking fear into the hearts of opposing captains with is overwhelming firepower, but at the same time presenting itself as an inviting target for players capable of exploiting the ship’s weaknesses in anti-air protection and combat endurance.

The USS Trenton is steaming at full speed towards the closed testing of War Thunder’s naval forces and participants of these tests will be among the first players who will have the chance to command this powerful warship in battle. Time to raise the anchor and leave the comfort of calm seas behind you, captains!

Commenting is no longer available for this news
Rules
Frosty1984
0

Problem with US CL's : everything newer than aincient Omaha is way bigger and poses balance problems: Brooklyn with 15x152mm? Even Clevelamd with 12x152 and 10x127 aeverly outguns Emden/Corleoni...

Out of curiosity, why are we getting a particular ship of the line instead of simply "Omaha Class"?

Why Trenton and not Omaha? If you're not going by the lead ship of the class there's no reason this ship isn't Wilwaukee, or Cincinnati, or Raleigh, or Detroit, or Richmond, or Concord, or Marblehead, or Memphis...

Because i quote from the above text "The ship were used to carry the royal family of Luxembourg, who had escaped from Nazi occupation in their country."

Lol of course Japan is still last despite having one of the most famous and powerful navies of the war.

Fantastic! My body is ready.

when CBT goes live, will I be able to use that PT109 I bought so long ago? I never got the chance to use it when I got it because my old computer's hard drive crapped out.